Shift from ocean to air, but for how long? The air cargo industry has won marketshare from ocean rivals over the last year, but analysts have warned there will be a return to sea transport.
In its weekly insight analysis, Drewry Maritime Research highlighted the modal shift that had taken place as US west coast port congestion caused by difficult negotiations between container terminal bosses and union officials resulted in a shift to air.
During the messy negotiations, port representatives accused labour of working to a go slow while unions accused the terminals of turning away workers.
Drewry said that the port delays forced shippers to switch to “more expensive airfreight”.
Drewry data shows that the spike in demand caused eastbound transpacific airfreight rates to shoot up from just over $4 per kg in the first half of last year to around $5.25 per kg towards the end of the year, although prices have since dipped below the $4 mark and are now below last year’s level. 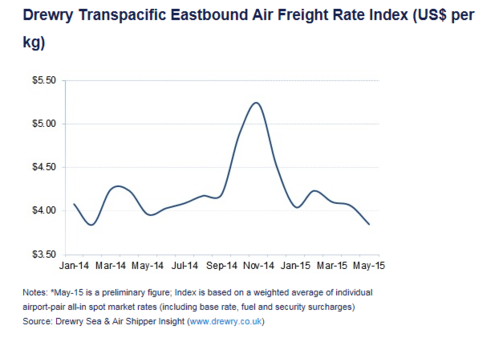 Drewry said the decline in rates has come in line with the end of the shopping season and also because “US port operations have sharpened up”.
Other figures also point to a shift from ocean to air and also suggest some of that changeover has been maintained, even though ports have improved operations.
US Census Bureau data shows that airfreight only increased its share of US import containerisable trade from 2.4% at the start of 2014 to 2.8% in May, looking at individual commodity types reveals a greater shift.
The analyst said in normal circumstances there is very little overlap in the goods that ocean and air cargo move but the small bubble they do fight over in the middle include items and parts from the hi-tech, fashion, and automotive industries among a small select group that require expedited transportation.
However, Census Bureau “provide evidence of the general upwards trend for air cargo services in the last year or so with the high-tech commodities registering the most significant rise”.
It added: “Fashionable clothing, here represented by women’s blouses, has been switching to air in recent months in readiness for the summer season.
“The need to get more mundane everyday clothing such as men’s vests and T-shirts is less pressing, but even here there has been a small move towards air cargo.”
Drewry’s long-term prognosis for modal shift towards air was not positive.
On a more positive note, it said the current capacity oversupply and nosediving ocean freight rates could help maintain the modal shift for a while longer as shipping lines suspend and miss sailings to try and correct the situation, forcing shippers to use air to maintain supply chains.
It said: “The big picture is of the far cheaper ocean freight sector growing at a much faster rate than air cargo with greater demand for the sorts of goods that are typically moved by containers and the fact that more higher-value goods, the bread and butter for air traffic, are increasingly being trusted to ocean carriers.
“As port operations improve on the US west coast the reversal in the long-term shift towards ocean will resume.
“The prospects of missed sailings in the peak season as ocean carriers look to redress the supply-demand imbalance could potentially prolong the blip for a small number of high-value goods.” 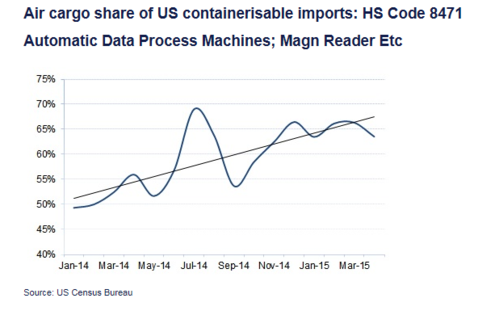 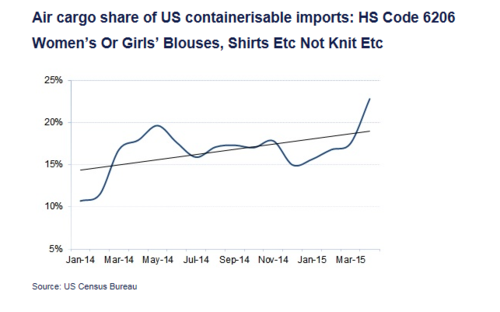 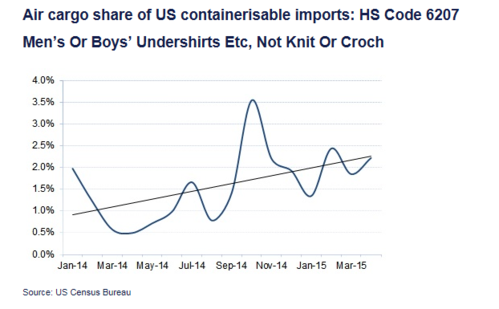 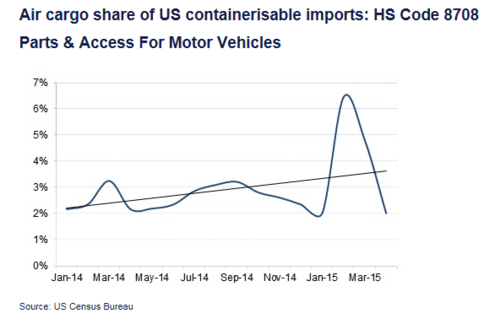