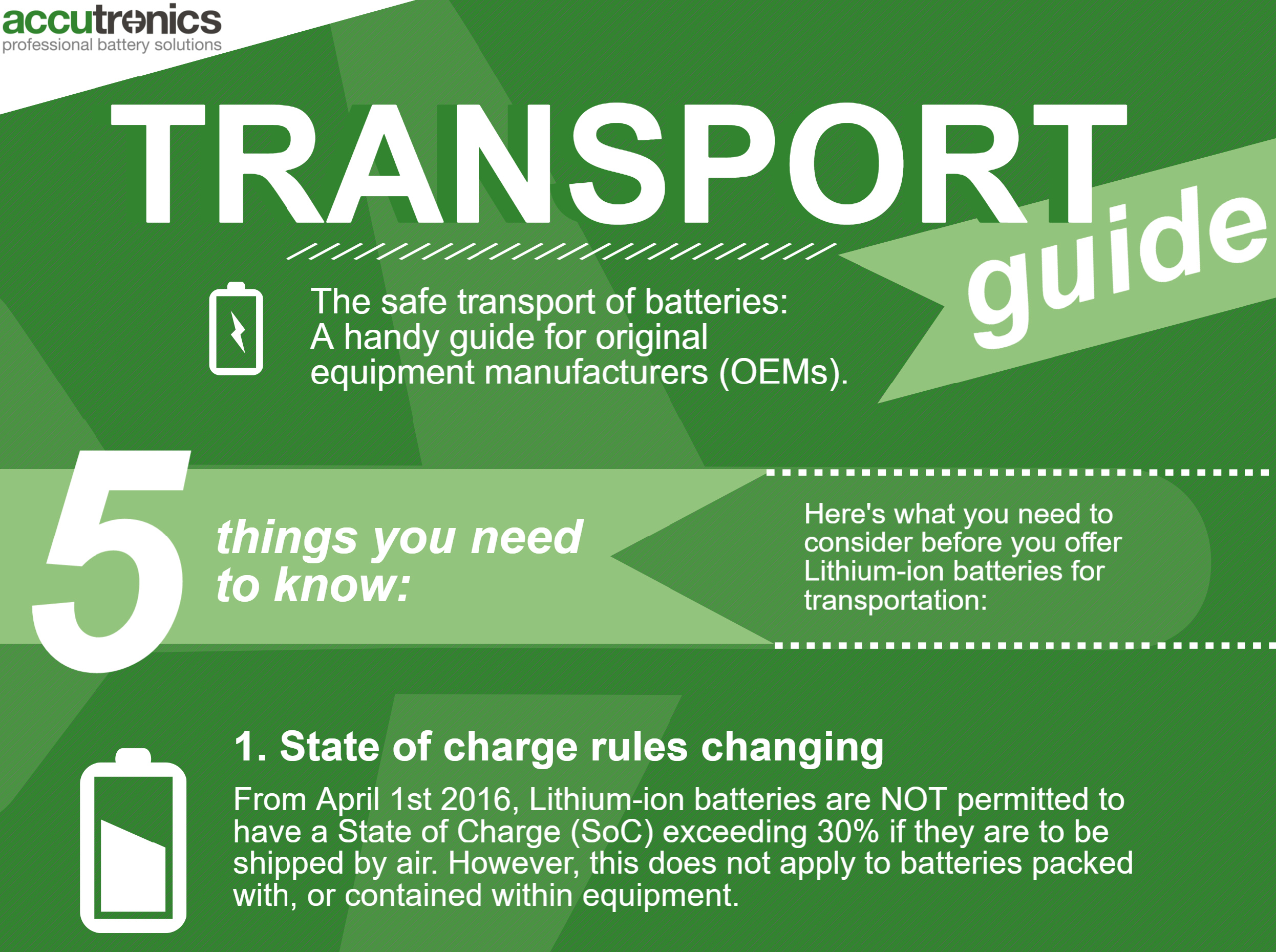 UK battery specialist Accutronics has released a new one-page guide about the safe transport of lithium-ion batteries as air cargo, which face tough new regulations from April 1.
United Nations aviation regulator ICAO has placed a ban on lithium-ion batteries as standalone bellyhold shipments on passenger aircraft from April, although batteries contained within electronic equipment can still be flown as bellyhold cargo.
A 30% state of charge (SoC) limit applies only to batteries shipped by themselves.
Targeted at original equipment manufacturers (OEMs) in the medical, defence and instrumentation sectors, the Accutronics guide offers “five quick steps” to ensuring that batteries meet international standards of design, assembly and testing before being packed for shipment. The guide can be downloaded here.
As well as new changes coming into force from April in relation to the SoC of batteries transported as cargo on a passenger aircraft, the guide also highlights IEC standards, UN testing regulations and special provisions required before batteries can be shipped by plane.
"It can be a challenge to navigate the maze of regulations," explained Neil Oliver, technical marketing manager at Accutronics. "For example, batteries in medical applications must meet the requirements of IEC safety testing in addition to the mandatory transportation testing. With the high volume of batteries now being shipped by plane globally, it is important that businesses offering batteries for transport are aware of their responsibilities.”
The rules around lithium-ion batteries are complex. ICAO has issued a further clarification on the new rules, stating that  lithium ion batteries carried by passengers in their personal electronic devices, whether in their carry-on or checked baggage, are not affected by this new restriction.
The rise in demand for smaller, more portable devices that require a lot of battery power has resulted in more compact and energy-dense batteries. Customers in industries including medical, healthcare, security, defence and instrumentation are increasingly using feature-laden devices with power hungry features including colour touchscreens, GPS antennas and Wi-Fi radios, more powerful processors and onboard storage.
Added Oliver: "We’ve released this one-page guide to give OEMs a starting point on the journey to safely transporting lithium-ion batteries by plane. If OEMs still need a helping hand, Accutronics has transport-qualified experts who can help and our customisable range of modular and credit-card batteries and charger solutions are available to suit transportation requirements."
After the ICAO ban was announced, IATA issued a summary of the rules: "The ICAO Council adopted the recommendation of the ICAO Air Navigation Commission (ANC) that lithium ion batteries, UN 3480, Packing Instruction 965 only, be forbidden, on an interim basis, as cargo on passenger aircraft.
"The prohibition does not apply to lithium ion batteries packed with equipment or lithium ion batteries contained in equipment, UN 3481, Packing Instruction 966 and Packing Instruction 967 respectively.
"The prohibition becomes effective 1 April 2016, as applies to the requirements that lithium ion batteries, UN 3480, PI 965, to be shipped at a state of charge of no more than 30% of their rated capacity, and other changes advised through the addendum to the 57th edition of the IATA Dangerous Goods Regulations (DGR) issued in January of this year."
IATA added that a further addendum to the DGR will be issued to align with the issuance of Addendum 4 to the ICAO Technical Instructions.