Ten years after, airfreight still feels the effects of the global financial crisis 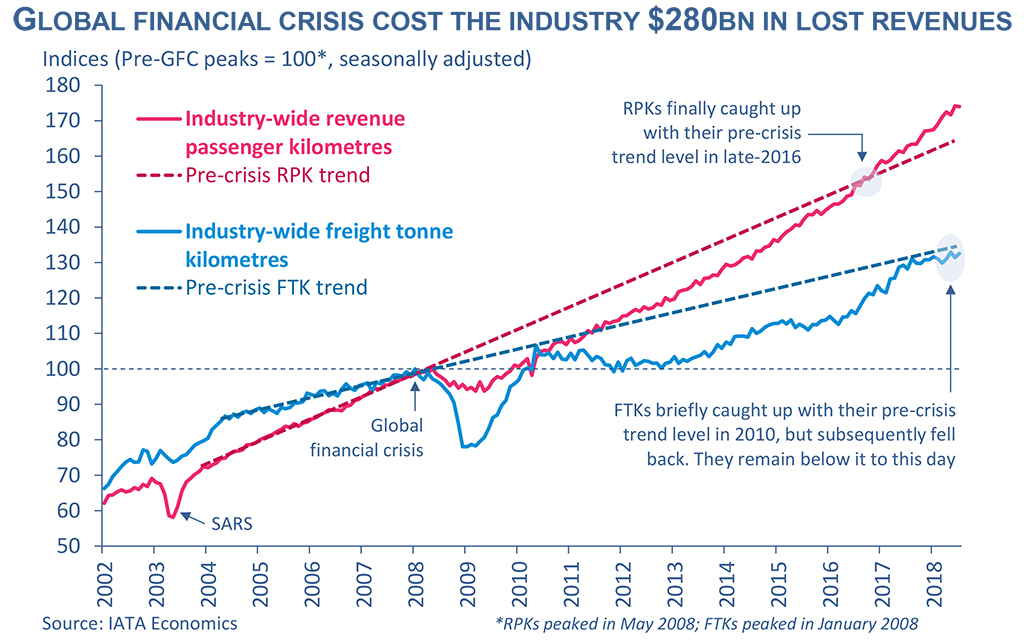 A decade after the collapse of Lehman Brothers and the global financial crisis (GFC) that followed, airfreight volumes are still feeling the effect.
IATA says that the 22% peak-to-trough decline in freight tonne kilometres (FTKs) during the GFC was almost twice as large as that seen in the previous freight downturn in the early-2000s.
While freight volumes initially “bounced back strongly” after the GFC, IATA said that the “disappointing growth experience thereafter means that they are still marginally below their pre-crisis trend level to this day”.
It added: “Somewhat paradoxically, the downturn in passenger demand during the GFC was not especially deep; the peak-to-trough decline in revenue passenger kilometres (RPKs) was less than half that seen following the SARS outbreak in 2003, for example (6.3% versus 15.8%).”
IATA estimates that the GFC cost the global aviation industry some $280bn in lost revenues.
“The key point is that it has taken a long time for the industry to recover from the GFC, and this has had a big impact on activity and revenues. All told, we estimate that 5.8% fewer RPKs and 8.9% fewer FTKs were flown in the years following the GFC than would have been the case had they continued their pre-crisis trends.
“This is equivalent to 2.9trn fewer RPKs and 180bn fewer FTKs. At current yields, this equates to around $280bn in lost revenue for the industry over the past decade.”