Top 25 cargo airlines 2016: FedEx maintains top spot but ABC and Qatar on the up FedEx was once again the busiest freight airline in the world, while Qatar Airways, AirBridgeCargo (ABC) and All Nippon Airways were among the fastest growers in 2016 (see end of article for full table).
The annual World Air Transport Statistics report from Iata showed that in freight tonne km (FTK) terms, FedEx was the busiest airline in the world last year with scheduled traffic totalling 15.7bn FTK on the back of a slight 0.6% year-on-year decline in demand.
The decline in freight traffic comes despite a 0.8% increase in tonnes flown, suggesting the express operator saw package and freight shipments increase in weight but flew the volumes over shorter distances.
Second placed Emirates saw cargo traffic increase by 0.9% year on year in 2016 to reach 12.3bn FTK, while tonnages increased by 3.4%.
In its annual report, the carrier reported “challenging” market conditions with fast-changing demand patterns.
During the year, Emirates SkyCargo’s total freighter fleet remained unchanged, with 15 aircraft: 13 Boeing 777Fs, and two Boeing 747-400Fs.
Emirates SkyCargo also inaugurated the SkyPharma 4,000 sq m purpose-built facility at Dubai International Airport; and launched the White Cover Advanced, a protection system for temperature-sensitive cargo.
Freight yield per FTK decreased by 8%, reflecting the strong downward trend across the industry and the weakening of major currencies against the US dollar.
Overall, the top 25 cargo airlines saw cargo traffic increase by 4.1% year on year to 155bn FTK, compared with overall industry growth of 3.6%, nearly double the five-year average of 2%, to 224bn FTK.
There was a modest start to the year before demand took off in the latter half of 2016 with a particularly strong peak season.
Iata said the second-half improvement coincided with a steady increase in manufacturers’ export order books, with pharma and cross-border e-commerce two of the best performing sectors.
The above market growth generated by the top-25 carriers is fuelled by airlines expanding their fleets, such as Qatar, AirBridgeCargo (ABC), All Nippon, United and China Southern. In Europe, Lufthansa and Cargolux also registered above market improvements.
The airline that saw total cargo traffic increase by the largest amount in 2016 was Qatar Airways as it climbed up one spot to fifth place overall with traffic of 9.2bn FTK and year-on-year growth of 20.4%.
The increase comes as the airline increased its network during the year, adding six new freighter destinations and the launch of 10 new bellyhold flights. It also increased frequencies to existing destinations.
The past year has also seen the airline’s freighter fleet grow. At the end of March − when the airline’s fiscal year ended − its cargo fleet included 12 B777Fs, eight A330Fs and a single B747F compared with eight B777Fs and five A330Fs at the same point last year.
In percentage terms, ABC was the fastest grower in 2016 as it registered an improvement of 20.8% year on year to 4.9bn FTK.
The increase comes as the airline takes delivery of new aircraft and therefore continues to add new routes and services.
In September last year, the airline took delivery of its ninth new B747-8 freighter, taking its total fleet to 16 747Fs at the time.
Some of the new destinations added to the carrier’s network during the year include: Houston, Chongqing, Phnom Penh, Seattle, London Heathrow and Oslo.
The carrier to register the largest decrease in traffic was EVA Air as demand slipped by 7.4% on 2016 levels to 3.5bn FTK. The Taiwanese carrier has been busy reducing capacity over the last couple of years. 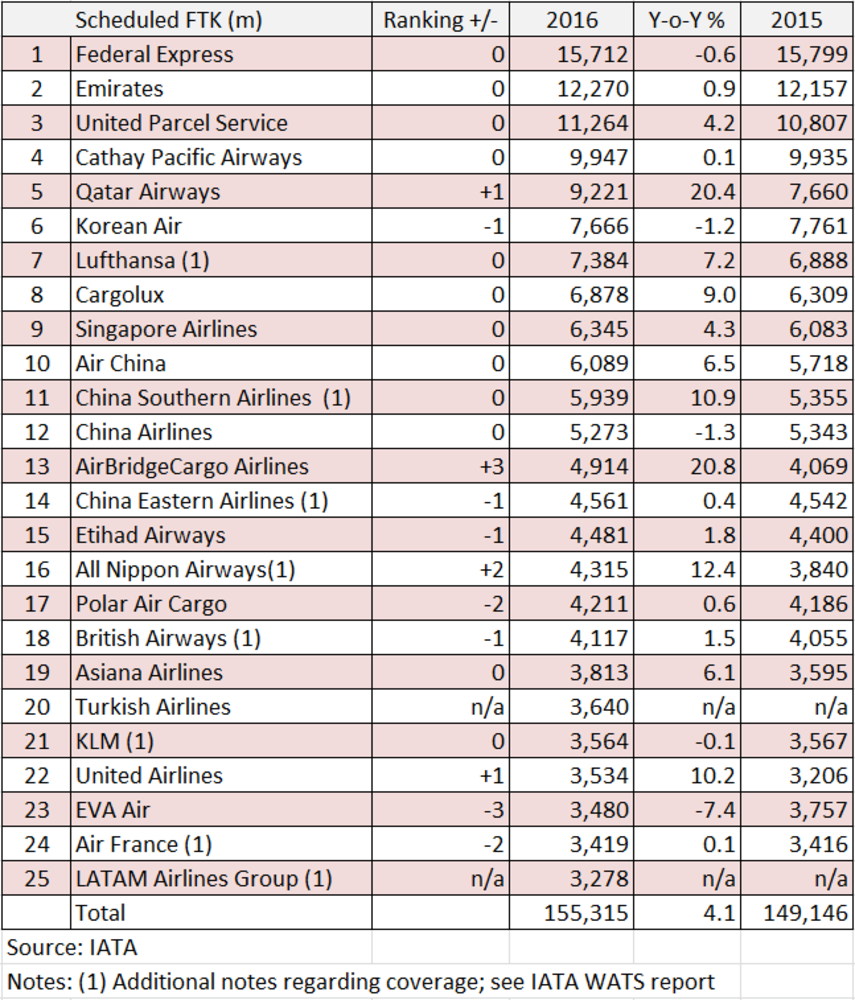 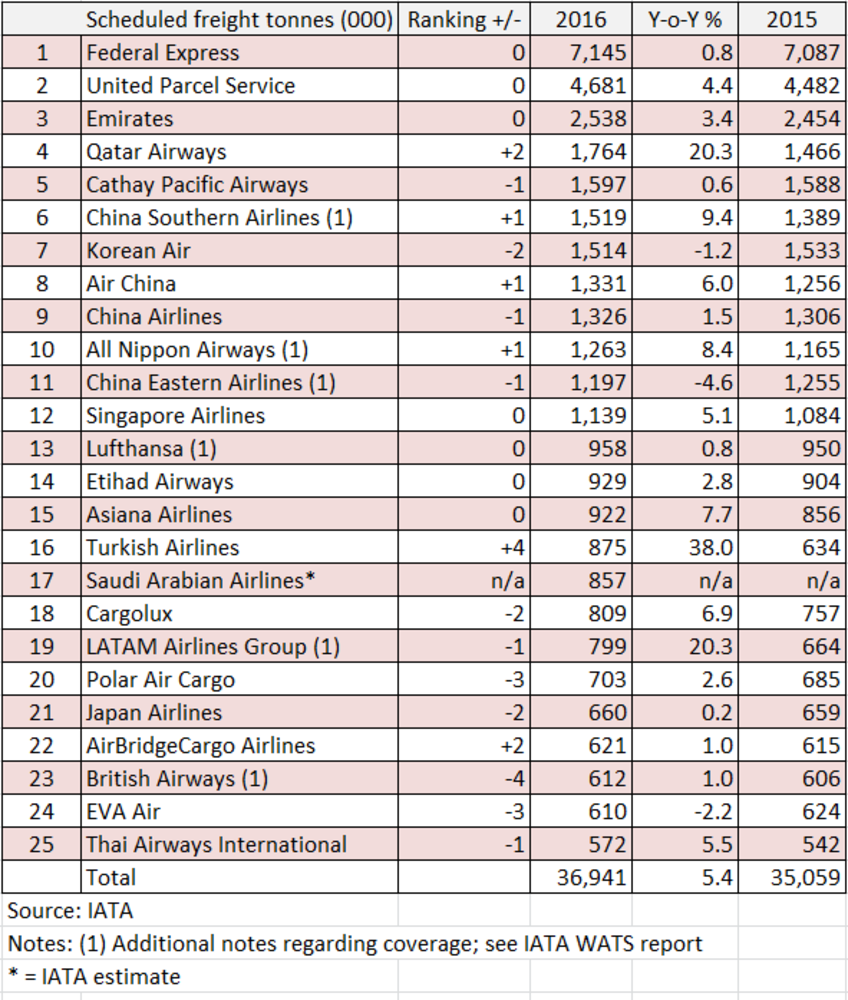