FedEx was last year the world’s busiest cargo airline despite volumes remaining flat on a year earlier, while Qatar moved into second place and UPS was up to third, according to IATA’s World Air Transport Statistics (WATS) report. (See end of report for full chart).

Last year was a tough 12 months for the air cargo industry — although nothing compared with 2020 — as IATA said that overall volumes declined by 3.3% year on year.

However, the top 25 cargo airlines appeared to outperform the overall market, with demand dropping by 1%.

Topping the list was express giant FedEx as its cargo traffic was flat on a year ago at 17.5bn cargo tonne kms.

In a quarterly results filing, the company said that it had been affected by “continuing trade disputes, including reductions in international airfreight, and tepid, at best, business-to-business domestic parcel and freight shipping”.

The express giant also took the decision in 2019 to not renew its US domestic contract with Amazon in order to focus on serving the broader e-commerce market.

Later in 2019 FedEx announced plans to cut its freighter capacity in response to weaker macroeconomic conditions.

At the time, FedEx chairman Fred Smith said that global macroeconomic conditions were taking their toll on performance.

He explained that the China-US tariff war was not only affecting the US, but Europe was also coming under pressure because a slowdown in China was having an impact on German exports to the Asian powerhouse.

Qatar Airways became the largest pure air cargo carrier (excluding the integrators) and moved into second place overall as it saw its traffic increase by 2.6% year on year to 13bn CTK.

The Doha-hubbed airline was one of only five to record an increase in cargo traffic last year. The improvement comes as Qatar has been expanding its freighter fleet over the last few years.

The carrier’s freighter fleet grew during the 2018-19 fiscal year with the addition of three new Boeing 777 freighters. Its overall cargo capacity during the fiscal period increased by 11.8% when passenger fleet expansion is taken into consideration.

The growth comes despite the ongoing airspace blockade on Qatar put in place by neighbouring countries, which started on June 5, 2017.

Another grower was third-placed express operator UPS, which saw its air cargo traffic last year increase by 3.1% to 12.8bn CTK.

“Our network improvements from transformation enabled UPS to embrace a surge in demand for air products while at the same time generating productivity improvements and positive operating leverage,” said David Abney, UPS chairman and chief executive.

The carrier that recorded the largest increase in cargo traffic was Turkish Airlines, as it registered an increase of 19.3% year on year to 7bn CTK, leaping from twelfth to ninth on the list.

Turkish Cargo has been expanding rapidly over the last few years through the addition of extra freighter and passenger aircraft in line with the opening of the new Istanbul Airport.

The airline has the ambition of becoming one of the top five cargo airlines by 2023. 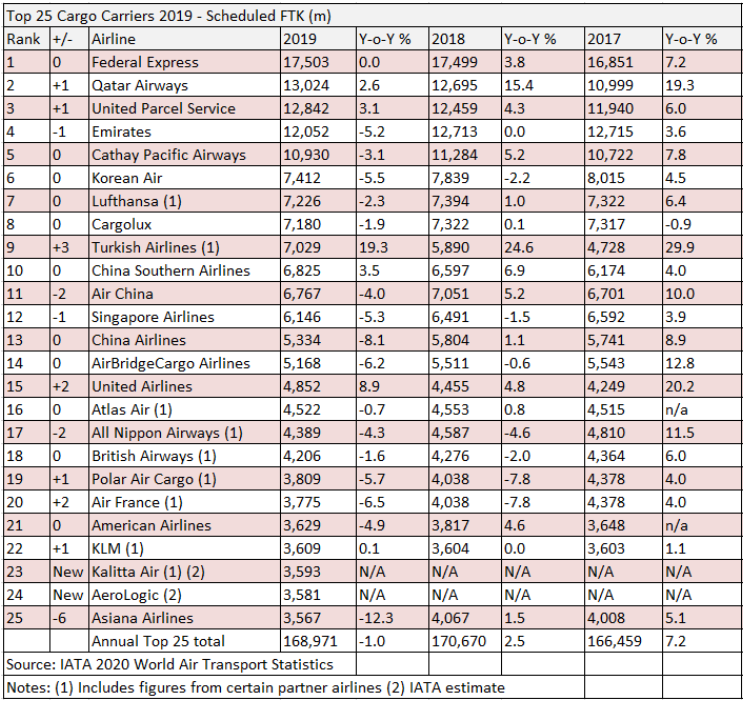 Read the full report in the September issue of Air Cargo News. Sign up now to receive the publication for free!