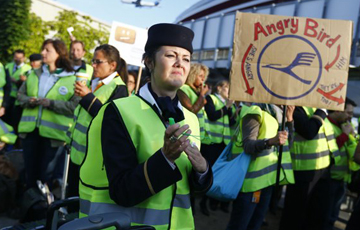 LUFTHANSA’S unions have apparently started to believe the common yet false assumption that airlines are made of money.
Despite the airline only just clawing its way out of the effects of the global recession, the union Vereinigung Cockpit had its members stop working from 1pm to 11.59pm local on 21 October grounding roughly 1,450 short-haul and 180 long-haul flights.
Lufthansa has already cancelled thousands of flights because of strikes this year, the longest strike campaign of the German airline’s history, including 3,800 over three days in April. While the strikes have heavily impacted Lufthansa Cargo’s belly cargo, fortunately freighters have only been marginally affected.
The union wants the carrier to reinstate benefits withdrawn last year that were paid to flight crew retiring before they receive a state pension. Lufthansa wants to raise the earliest possible retirement age to 60 years from 55 as part of a wider cost-cutting and productivity programme.
"The strikes not only cause severe economic damage to Lufthansa, but they also harm its reputation, with considerable consequences for our company and employees that remain unforeseeable even today,” said chief financial officer Simone Menne.
Other Lufthansa Group carriers, including Swiss, Austrian Airlines, Brussels Airlines, Air Dolomiti and Germanwings, aren’t affected.