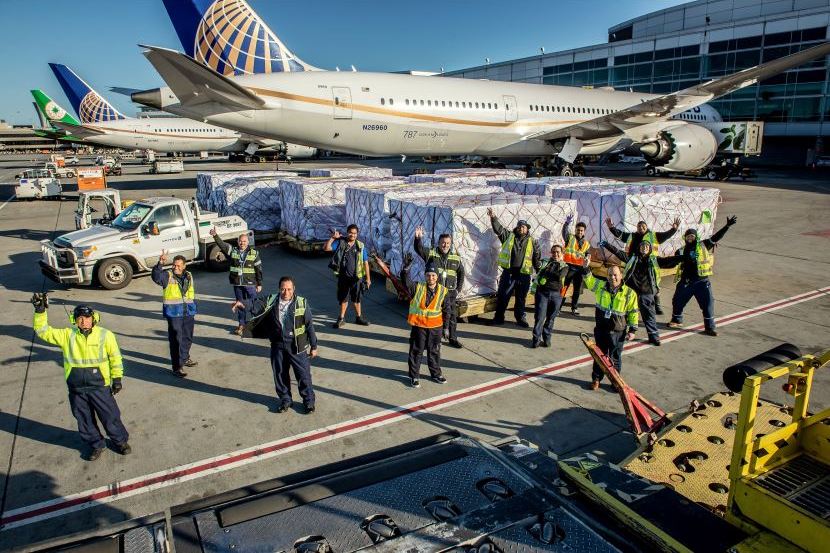 To support the continued fight against Covid-19, United Airlines has collaborated with Flexport.org to ship essential medical cargo to frontline workers in California and New York.

As part of the Frontline Responders Fund — a GoFundMe page launched by Flexport.org, the impact group that represents freight forwarder Flexport — millions of units of personal protective equipment (PPE) have been shipped from China to the US.

The shipments were transported from Shanghai in China to hubs in the US, including San Francisco and New York, with chartered United Airlines Boeing 787-9 Dreamliners and Atlas Air Boeing 747s.

On April 1, the first shipment arrived in San Francisco on a United Dreamliner aircraft, which is usually used for passenger service. Donated by Joe Tsai, a co-founder of Alibaba and owner of the Brooklyn Nets, and his wife Clara Wu Tsai, cargo on this flight included 14,000 kg of PPE, 1,000 ventilators, 70,000 goggles and 300,000 masks.

This shipment was then transferred onto a United 777 flight to New York, where the cargo was distributed to hospitals, medical centers, nursing homes and state agencies.

Since the Covid-19 outbreak, it has been essential for supply chains to be kept moving to ensure that essential cargo such as medical equipment and supplies, medicines and food, can be delivered across the globe.

In light of this, United Airlines is utilising its network and personnel to get vital shipments to US hubs and other key international destinations.

In mid-March, United began flying a portion of its Boeing 777 and 787 fleet as dedicated cargo charter aircraft to transfer freight between the US and the rest of the world.

United is now operating approximately 100 cargo charters each week between US locations, as well as between the US and major hubs in Europe and Asia.

Frontline Responders Fund has raised more than $6m, including donations from notable figures such as Arnold Schwarzenegger and Edward Norton, to help pay for transportation costs of Covid-19 relief.