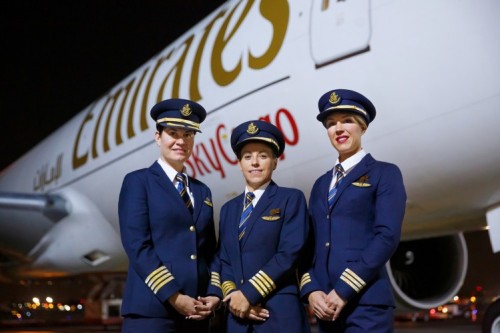 Captain Ellen Roz from the US and first officer Heidi McDiarmid from Australia cover close to 30,000kms in 10 days on five freighter flights from Frankfurt to Mexico City onwards to Quito, Aguadilla, Amsterdam and finally to Dubai transporting over 300 tonnes of cargo ranging from fresh flowers and fruits to pharmaceuticals.

The two pilots were also joined by captain Heather Wolf from Canada for operating the flight from Frankfurt to Mexico City.

Over 75 tonnes of fresh flowers were transported on the freighter flights operated by Roz and McDiarmid from Quito to Aguadilla and from Aguadilla to Amsterdam.

“This supports the local economy in Ecuador and the livelihoods of over 100,000 people in the country who work to cultivate and harvest flowers.

“Freighter flights also allow for rapid transportation of goods such as life-saving medication from the location where they are manufactured to patients who may urgently need them for treatment. Close to 10 tonnes of valuable pharmaceuticals were transported on the freighter flight from Frankfurt to Mexico City operated by the all-women flight deck crew.”

Emirates said that women constitute more than 40% of its total workforce with the majority working as cabin crew. Emirates’ female pilots come from over 30 nationalities, covering an age range from 23 to 62 years.

Women from over 160 nationalities, including more than 1,100 Emiratis, are employed across the Emirates Group in operational roles in functions including flight operations, engineering, aircraft maintenance and appearance, catering, cargo and ramp operations; in customer facing roles in airport services, sales and customer affairs and corporate roles across business support functions.