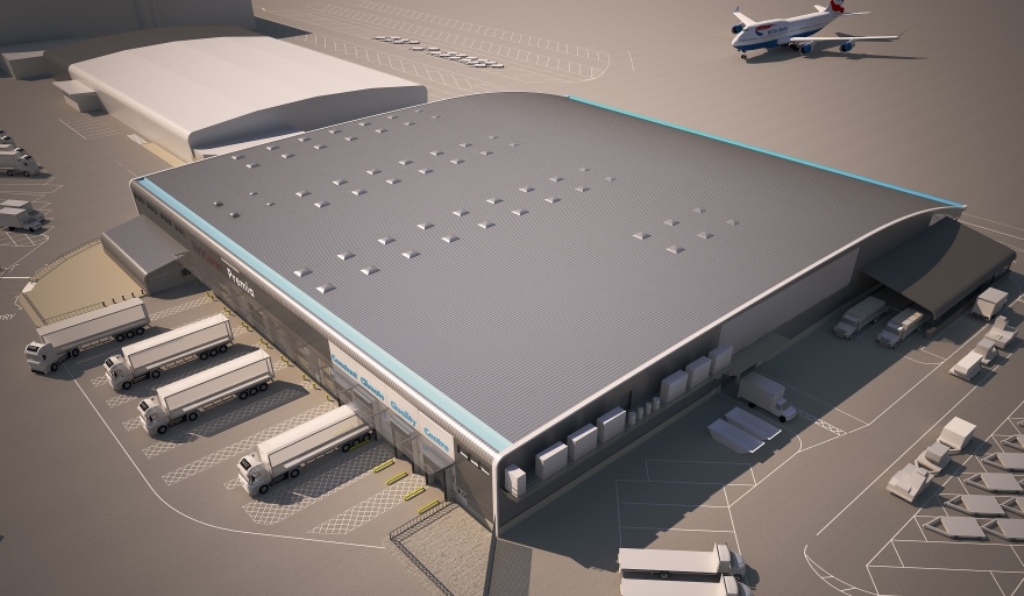 IAG Cargo has unveiled plans to build a new £55m facility for premium freight and pharma at its London Heathrow site in response to growth in its services for high-value cargo and will also launch a new time-critical product (see video at end of article).
The new terminal, to be called New Premia, will double the size of the existing 10-year-old Premia building and will offer a larger dedicated constant climate centre for pharmaceuticals.
The centre will feature 11 truck docks, with four reserved for the constant climate centre, a new warehouse management system to improve through flow of cargo, an additional 20 workstation for break and build, express storage and the whole facility will be temperature controlled between 15 and 25 degrees Celsius.
Meanwhile, the constant climate centre included in the building will feature air locked areas with controlled temperatures of two to eight degrees Celsius and 15 and 25 degrees Celsius.
IAG Cargo head of strategy and business development Sarah Coulson said work on the new facility would begin in 2017, with opening expected in 2018. The current facility will be left unaffected during construction of the extension.
IAG Cargo chief executive Drew Crawley and commercial director David Shepherd explained that it has been a tough year for air cargo in general.
In contrast, growth in demand for its premium products meant the existing Premia was reaching capacity.
Crawley pointed out that in 2015 the IAG Prioritise e-commerce/express product had recorded growth rates of 32% following on from a 5% improvement in 2014.
Meanwhile, its Constant Climate product recorded growth of 44% last year and 55% in 2014.
Premium shipments also generated higher yields than general cargo.
"Premium is important because we get greater yields and we are able to charge more for premium freight  because customers value the service we give," said Crawley.
“IAG Cargo’s four airlines now carry more premium freight than at any other point in their combined history.
“With the continued growth of high speed e-commerce and cool chain logistics in particular, as well as the ongoing expansion of the IAG family and network, we need facilities that are ready for the next generation of premium freight.”
Shepherd also highlighted that the airline group’s fleet of aircraft was also growing. In the next 10 years it will have 12 A380s, 42 B787s and 34 A350s.
Crawley also spoke of IAG’s drive to understand the needs of the shipper to drive its premium product: "We have talked about our focus on premium before because that’s where we think we can really differentiate. We really believe in getting to understand the needs of the customer, and by that I mean the shipper.
"It doesn’t mean we are going to go around the freight forwarder but as long as we can understand the needs of the shipper and work with the freight forwarder to deliver those, we believe we can make a difference in the market and differentiate ourselves from the competition.
"So premium remains and will remain a big part of our proposition going forward."
Shepherd added: "It’s been a tough year for air cargo and that begs the question of why we are so sure if we are doubling the capacity of our premium operations, how we can actually go into that.
"Our belief comes from a number of different areas. If you look at the global growth of the premium business [analyst] Seabury believes it has outgrown the general cargo market by 5% per annum over the course of the last ten years.
"We believe we see enough in the market to believe that this will continue. We also believe that our place in the premium product market has changed quite dramatically over the last ten years.
"Our constant climate product is now probably the world’s leading air cargo product for pharmaceutical traffic and our express product has caught up with the best in class in that arena as well."
IAG Cargo also revealed that on October 3 it would launch a new time-critical product called Critical.
Cargo carried on this new product would benefit from non-offload status, fast track at Madrid and Heathrow and would be guaranteed to fly on the service booked.
The airline group said several businesses in sectors ranging from aerospace to high tech had already signed up to the new service.
Shepherd said: “We understand the pressure our freight forwarder and supply chain partners come under when a customer demands that a shipment must move that day.
“Until now we have not had a product that fully satisfies that unique need, with short cut-off times and non-offloadable status, we can now meet the exact demands for shipments that must fly.”