India has overtaken China as the emerging economy to show the most growth potential, according to a survey of logistics professionals.
The 7th annual Emerging Markets Logistics Index from logistics firm Agility and analyst Transport Intelligence shows that supply chain executives expect an uptick in emerging markets growth in 2016, despite concerns about further slowing in China, fluctuations in oil prices, and the possibility that the US economy could weaken.
For the first time, supply chain professionals surveyed see India – rather than China – as the emerging market with the most growth potential.

In the overall Index ranking, which is based on economic and social data, India climbed two spots to third place, behind only China and United Arab Emirates (UAE), on strong economic performance and initial reforms launched by the government of Prime Minister Narendra Modi.
However, there was an overriding feeling of uncertainty from respondents.
“After a year of turbulence, 61% of logistics industry executives surveyed say they are unclear on the direction of the global economy or expect more volatility in 2016,” Ti said in a release.
“In spite of their wariness, roughly the same proportion (59.4%) say the International Monetary Fund forecast of 4.7% growth in emerging markets is ‘about right’. Emerging markets grew an estimated 3.6% to 4.2% in 2015, down from 4.5% in 2014.”
China, the world’s second-largest economy, remains the leading emerging market.
Among the countries at the top of the Index rankings, UAE (2), India (3) and Malaysia (4) leaped over the commodity-dependent economies of Saudi Arabia (5), Brazil (6) and Indonesia (7). Rounding out the top 10 were Mexico (8), Russia (9) and Turkey (10).
Nigeria (17) and Egypt (22) climbed 10 spots in the data-driven portion of the Index, the biggest gains by any country in seven years of rankings.
Meanwhile, countries in Latin America are losing ground to other emerging markets as a result of recession and political turmoil in Brazil, the region’s biggest economy, and depressed prices for commodity exports.
Of the 10 countries that slipped furthest in the Index, six are in Latin America: Peru, Argentina, Uruguay, Brazil, Colombia and Venezuela. Chile continues to be the top-ranked emerging market with GDP under $300 million.
Russia, hurt by Western sanctions and isolated economically since it began backing rebels in Ukraine and intervened militarily in Syria, fell from No. 7 to No. 9 in the Index. 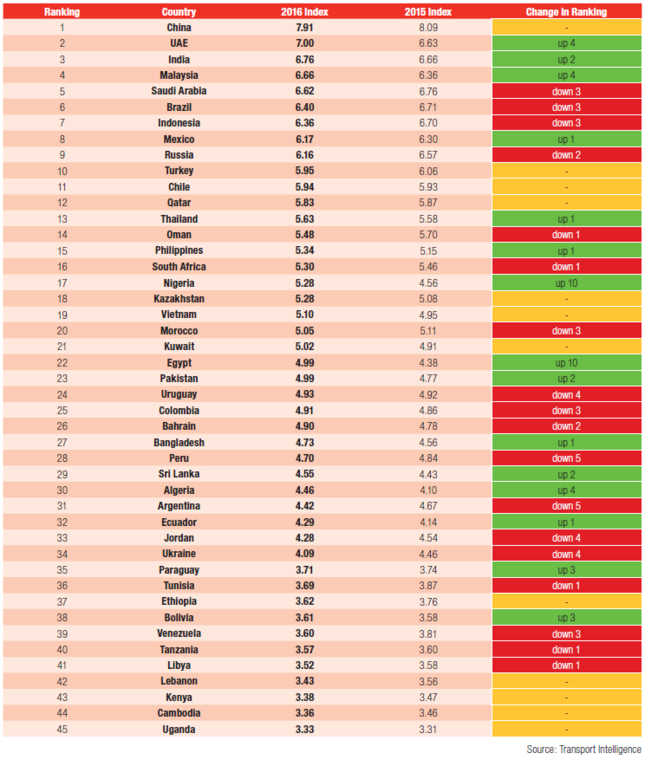