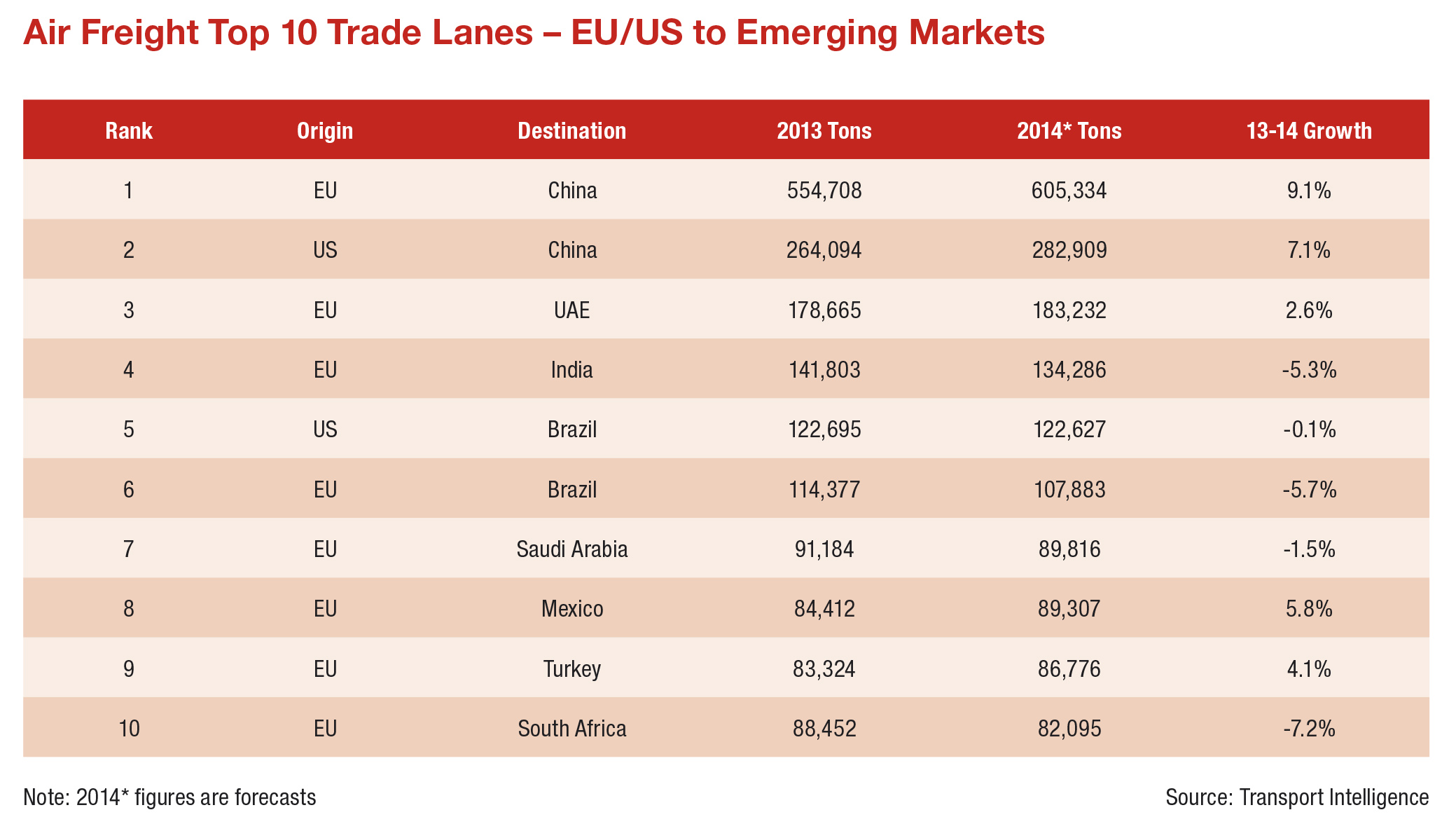 Asia’s Vietnam and Cambodia provided the fastest-growing airfreight trade lanes between emerging and developed markets.
US-Vietnam volumes surged 42.7 per cent by volume, and Cambodia-European Union airfreight increased by 41.9 per cent.
That was one finding from the comprehensive 2015 Agility Emerging Markets Logistics Index, now in its sixth year, a data-driven ranking of 45 emerging economies accompanied by a separate survey of nearly 1,000 global logistics and supply chain executives.
According to the survey, Russia’s growing economic isolation has damaged its appeal to logistics and supply chain professionals, with more than 75 per cent of survey respondents said they were pessimistic about Russia’s prospects.
Large BRICS nations: Brazil, Russia, India, China and South Africa have accounted for much of the growth and investment in emerging markets and have dominated the Index. But Saudi Arabia climbed to second place in the 2015 Index, ranking behind only China, which has 47 times the population and 12.5 times the economic output.
“A year ago, there was talk of an emerging markets meltdown and of a new ‘fragile five’ based on concerns about weakness in South Africa, Brazil, India, Turkey and Indonesia,” said Essa Al-Saleh, president and chief executive of Agility Global Integrated Logistics.
“Emerging markets as a group turned out to be far more resilient – even vibrant – than expected despite continued sluggishness in the global economy,” he added.
Transport Intelligence (Ti), an analysis and research firm for the logistics industry, compiled the Index.
John Manners-Bell, chief executive of Ti, said: “Five years after the global recession, prospects for all economies, developed and emerging, are still unclear. Economic fragility, a falling oil price and increasing security concerns in Africa and the Middle East have created uncertainty.
"Despite the challenges, interest remains high in these volatile markets as indicated by increased infrastructure investment, expanding international trade and increased domestic demand. Global manufacturers, retailers and their logistics service providers need to remain cognizant of the shifting dynamics if they are to exploit the significant opportunities which exist.”
The report states that the world’s busiest air trade lanes, as measured by cargo tonnage, are those linking China with the US and EU. EU-China airfreight was up 9.1 per cent while US-China airfreight rose 7.1 per cent.
Outbound traffic also posted big gains as China-US volume grew 14.3 per cent and China-EU airfreight increased 9.6 per cent. Those were the “sharpest gains” among top trade lanes that link the US and EU to emerging markets.
The report also found that EU air shipments fell sharply to India (-5.3 per cent), Brazil (-5.7 per cent) and South Africa (-7.2 per cent, while India’s air volume to the EU rose 4.5 per cent and increased by 6.5 per cent to the US.
Chilean airfreight to the US fell 6.6 per cent, but Peru increased air shipments to the US by 5.7 per cent. Mexico-EU air shipments increased 8.1 per cent.
States the report: “Although many of the world’s fastest-growing trade lanes show large volume increases from relatively low bases, the gains are significant for emerging economies.
"The fastest-growing air trade lanes linking emerging markets with the US/EU are: US-Vietnam up 42.7 per cent, EU-Vietnam up 17.0 per cent, US-UAE up 15.9 per cent, EU-Qatar up 14.1 per cent, Cambodia-EU up 41.9 per cent, Peru-EU up 28.0 per cent, Philippines-US up 22.3 per cent and Philippines-EU up 20.6 per cent.”
Did you find this article of interest, if so why not register for a FREE digital subscription to Air Cargo News? – Find out more