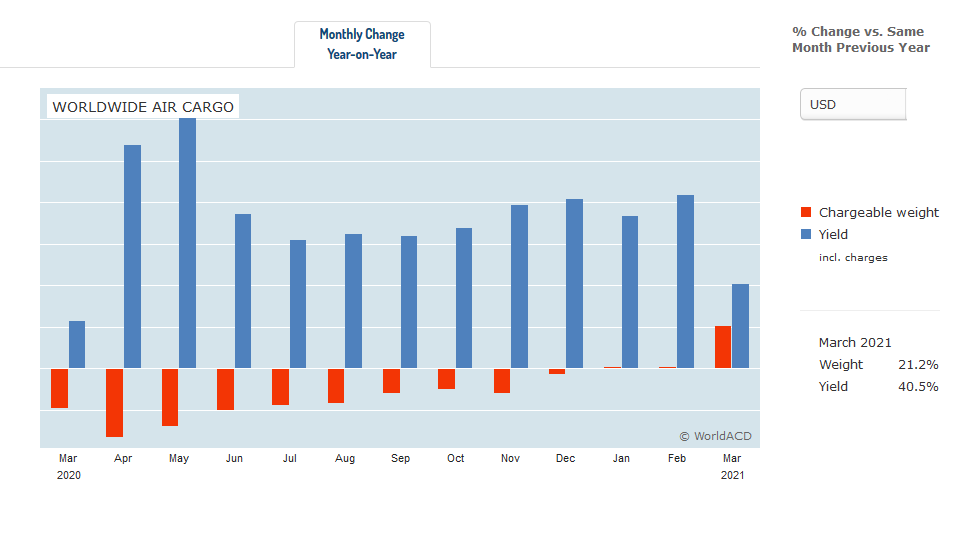 March was a month of two halves for air cargo in terms of year-on-year performance as 2020’s lockdowns began to skew comparisons, according to data provider WorldACD.

The latest figures from WorldACD show that demand in March was 21% up on last year. However, in the first half of the month there was a 0.2% decrease on a year earlier, while the second half was up 44%.

“A clear reminder that the first lockdown started to bite air cargo by mid-March 2020,” WorldACD said.

When comparing with previous years’ performance, air cargo demand in March 2021 was only marginally lower than the same month in 2018 and 2019.

WorldACD said this is “more remarkable” when the amount of capacity that has been taken out of the market compared with 2018 and 2019 is taken into account.

Year-on-year load factor improvements in each of the three first months of 2021, range between 15 and 20 percentage points.

“To no one’s surprise, China leads the first quarter air cargo growth tables by a large margin,” WorldACD said. “The whole Asia Pacific area increased by 19% year on year (outbound), followed by the Americas (10% year on year in the north, 6% year on year in central & south). Europe and Africa remained the same, whilst the origin Middle East/South Asia dropped by 10% year on year.”

It added: “The categories vulnerable & high-tech, flowers and live animals, however, did better than in first quarter 2019, the first-mentioned by an impressive 22%.”

The company added that performance in March varied when looking at volume developments for the 30 largest markets first.

“For six of them (the origins US Atlantic South, USA Midwest, Taiwan, Thailand, Belgium and Kenya), March 2021 was simply the best month since January 2018.

“The same was true for the destination markets China-East, South Korea, Japan, Belgium, the Netherlands and US-Midwest.

“Other top-origins, notably China North East and Central, France, UK, India, and Australia, have not yet recovered.

“Their month of March remained more than 20% below their best month over the past three years. This is also the case for the destinations Australia, Canada East, China Northeast, Spain, South Africa and US Northeast.”

WorldACD said that while volume figures were changing, the most drastic development was in rates.

It said that over the first quarter rates are up by around 61% compared with last year.

“Not only do the rate increases highlight the capacity shortage and the short term financial influence of the pandemic, they may cause further changes in cargo capacity made available by passenger airlines.

“After all, with rates on full freighter flights up by 32% year on year, whilst those on passenger aircraft almost doubled, airlines could be tempted to take a fresh look at the capacity they make available for air cargo.”

“Do we see that already? Freighter capacity in March increased 7 percentage points less than cargo capacity on passenger aircraft, while the worldwide rate increased every week from mid-March to mid-April.”