DSV Panalpina: Focus on higher margins and growth rather than slimming down on jobs 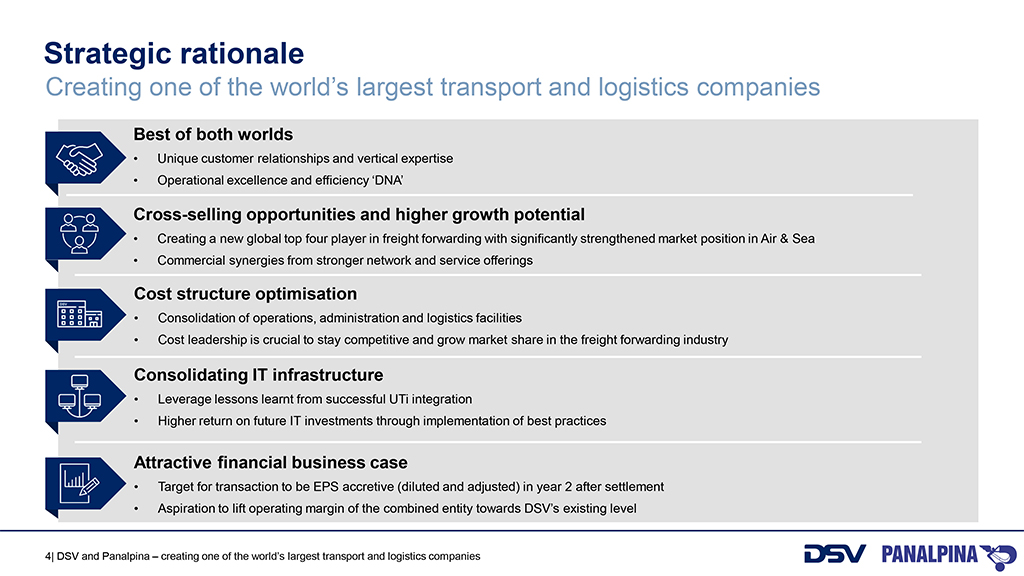 DSV intends to lift the profit margin of $4.6bn take-over target Panalpina after the two global freight forwarders have combined their businesses into a $17bn turnover company.

DSV boss Jens Bjørn Andersen indicated that the regulatory process in the all-share transaction should take around six months to complete, and that he does not expect “remedies” to be placed on the deal “in any jursidictions”.

The chief executive of Denmark-based DSV, speaking from the Basle headquarters of Swiss stock exchange listed Panalpina, added that the integration process of the two companies could take up to three years, although he hopes this could be reduced to two years, based on previous major acquisitions by DSV.

Said Andersen: “It is our aim to lift the margin of the two companies to the margins of DSV. We have higher margins and profitability than Panalpina.”

Andersen, addressing the question of regulatory approval, told journalists: “This is a fantastic opportunity for both companies in a very fragmented industry where the very large players have a very small marketshare. That is why we believe in consolidation for our industry.”

Andersen believes that there are “cross-selling opportunities” for both DSV and Panalpina which would be “beneficial for the market,” citing the Danish operator’s extensive pan-European road haulage network as one example.

For reasons of regulatory compliance, neither company yet has access to the details of the other’s customer base.

Answering questions from the floor, Andersen said that DSV would pay a “fair price” for Panalpina and that the Danish company was known as a “disciplined buyer”.

Asked about potential staff rationalisation, Andersen said it would be “wrong” to say that no jobs will be lost, but added that any decisions on the issue would be “fair”, pointing out that the integration committee for the merger had an equal number of members from both companies.

He said that the plan was “to create growth and not to slim down”, citing the UTi takeover which came with 21,000 new employees three years ago. The total DSV staff number is now 3,000 higher than in 2016. He stated: “There was a small temporary dip in staff numbers but we created new jobs after that.”

Regarding Panalpina’s senior management, Andersen said that he “very much hoped they will stay on board,” adding that their input was “very important”.

He said that he would be able to give “much more flavour” on any changes after the closing of the deal.

Stefan Karlen, chief executive of Panalpina, spoke of “a change in direction” for the forwarder but reassured customers that it was “business as usual, and we will support our customers with the best possible optimal competence.”

He continued: “We are working on a solid integration plan.”

DSV boss “happy, proud and humble” to merge with Panalpina