DSV Panalpina saw its airfreight revenues rapidly increase during the second quarter of the year as a result of the coronavirus outbreak and the ongoing integration of Panalpina.

The company said that the increases were down to the acquisition of Panalpina, while revenues and profits were also boosted by an airfreight rate surge as a result of the air cargo capacity shortage.

The virus outbreak did however take its toll on volumes, with the overall market estimated to be down by 25-30%. Capacity was down by more than 30% due to the grounding of passenger operations, which drove up aircraft utilisation levels.

“A surge in the demand for certain higher yielding goods has led to significant lack of capacity and rate increases, most significantly for exports from China,” the forwarder said.

“In the second half of Q2 2020, the airfreight rates have partly fallen back. Still, capacity remains tight and, as activity levels in other industries pick up,the market remains challenging. Most air cargo is still moved on cargo planes, and charters of full cargo planes represent a large part of the market.

“Geographically, activity levels in Asia have been least impacted by Covid-19, whereas Americas and Europe have been more severely impacted. The Asia-Europe and trans-Atlantic trade lanes have been among the worst hit, and the division has a relatively high exposure to these trades.”

The forwarder said its gross profit margin was helped by the charter network it inherited from Panalpina, which has been expanded despite the cancellation of dedicated deal with Atlas Air.

The overall company saw its second-quarter revenues increase by 43.3% year on year to DKK28.7bn, earnings before interest and tax (ebit) were up 60.2% to DKK2.6bn and net profits increased 21% to DKK1.4bn.

“Strong cost management and the continued successful integration of Panalpina have been important drivers for our results.

“Covid-19 has created an extraordinary market situation in airfreight, and here we have been able to help our customers and have benefitted from the legacy Panalpina freighter network.

“The uncertainty remains higher than normal, but based on a strong first half of 2020 we are now able to reinstate guidance for the full year. We now expect EBIT before special items on level with the guidance we gave to the market before this crisis started.”

Based on the financial performance in the first half of 2020, operating profit (before special items) guidance for full-year 2020 is reinstated in the range of DKK8.2bn-8.7bn.

On the integration of Panalpina, the company said that it is progressing slightly ahead of plan, and more than 90% of the Panalpina volumes have been transferred to DSV’s IT platforms. 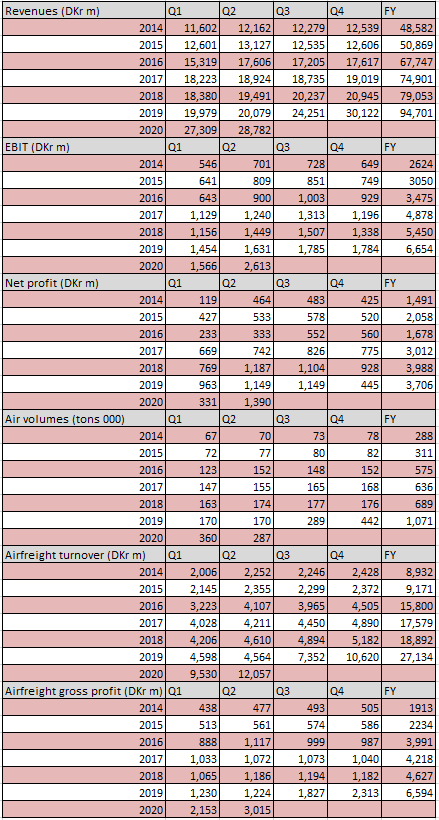