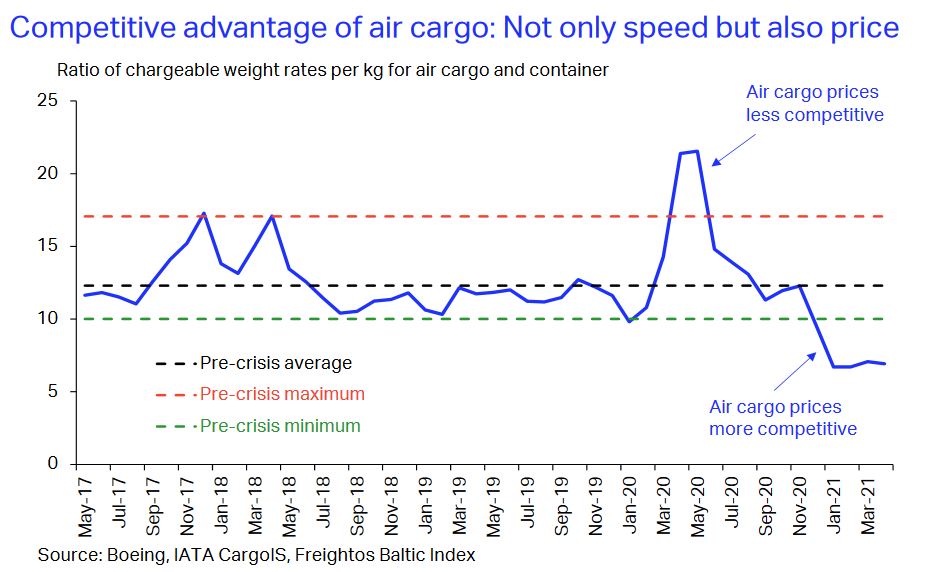 Market data provider Freightos said that air cargo rates from the Asia to the US had last week started climbing – ocean rates are one potential reason for the increase.

Freightos research lead Judah Levine said: “One culprit [for the ocean rate increases] may be an increase in ocean to air conversions driven by climbing rates and persistent delays in ocean freight.

“Some retailers seem to be making the choice to move ocean imports to air despite the expense and possible financial loss, as a way to guarantee inventory and build customer loyalty while their competitors may be sold out due to logistics delays.”

A forwarder contact agreed that there was spillover from ocean to airfreight because of ongoing disruption in the shipping industry.

He said airfreight was volatile but stable in comparison to shipping.

To highlight the current disruption in container shipping, IATA pointed to figures from SeaIntelligence that showed global shipping schedule delays have risen significantly of late, equivalent to an implied 8.6% loss of capacity on the available fleet in April 2021

“While air cargo fares remained elevated, container fares have increased strongly since then, and were more than three times higher than pre-crisis levels in April 2021,” IATA said.

“As, a result, relative price of air cargo vs ocean declined, supportive for air mode of transport. In Q1 2021, air cargo has grown 5.6% compared to Q1 2019, while container throughput increased by 6.1%. In contrast, in Q2 2020, when air cargo fares were close to 20 times those of containers, air cargo was relatively weaker. (Cargo Tonne Kms down 17.5% year-on-year in Q2, container throughput down 7.8%).”

The airline association added that air cargo was likely to continue to benefit from disruption in ocean shipping.

“Air cargo also tends to over perform other means of transport at the start of an economic upturn due to restocking cycles, when businesses turn to air to rapidly refill inventories as demand rises.