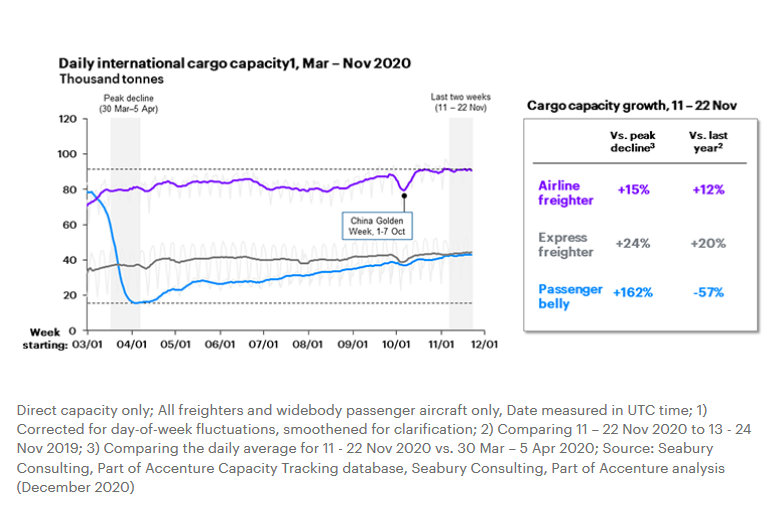 The air cargo industry saw rates out of Hong Kong increase in November while the start of December has seen carriers re-introduce belly capacity.

November figures from the Baltic Exchange Air Freight Index (BAI) powered by Tac Data show that in November average airfreight rates from Hong Kong to North America increased by 30% compared with a month earlier to $7.37 per kg.

From Hong Kong to Europe, rates in November increased by 43.1% on a month earlier to $5.38 per kg and initial figures seem to indicate they will continue to grow in December.

An increase in pricing at this time of year isn’t too much of a surprise as the peak season starts and various shopping promotions take place. However, prices remain far above last year’s levels as a result of the lack of overall air cargo capacity due to the grounding of many passenger services.

Average rates from Hong Kong to North America are up 91.9% on a year ago, while to Europe they are 65% up.

The particularly strong increase to North America comes as US retail groups have suggested that consumer spending has rapidly returned while companies have been going through a restocking cycle.

There was, however, a slight dip in prices on the trade in the first week of December. Looking forward, vaccination programmes are beginning to be launched which has the potential to put extra pressure on limited air cargo capacity.

Indeed, Paul Molinaro, World Health Organization chief of operations support and logistics told Reuters in an interview that airfreight rates were “outrageous” and one price had been quoted for a dry-ice pharma shipment was around 20 times higher than usual.

IATA has however said it expects prices to be lower in January after the peak season rush, which should coincide with a ramp up in vaccine shipments.