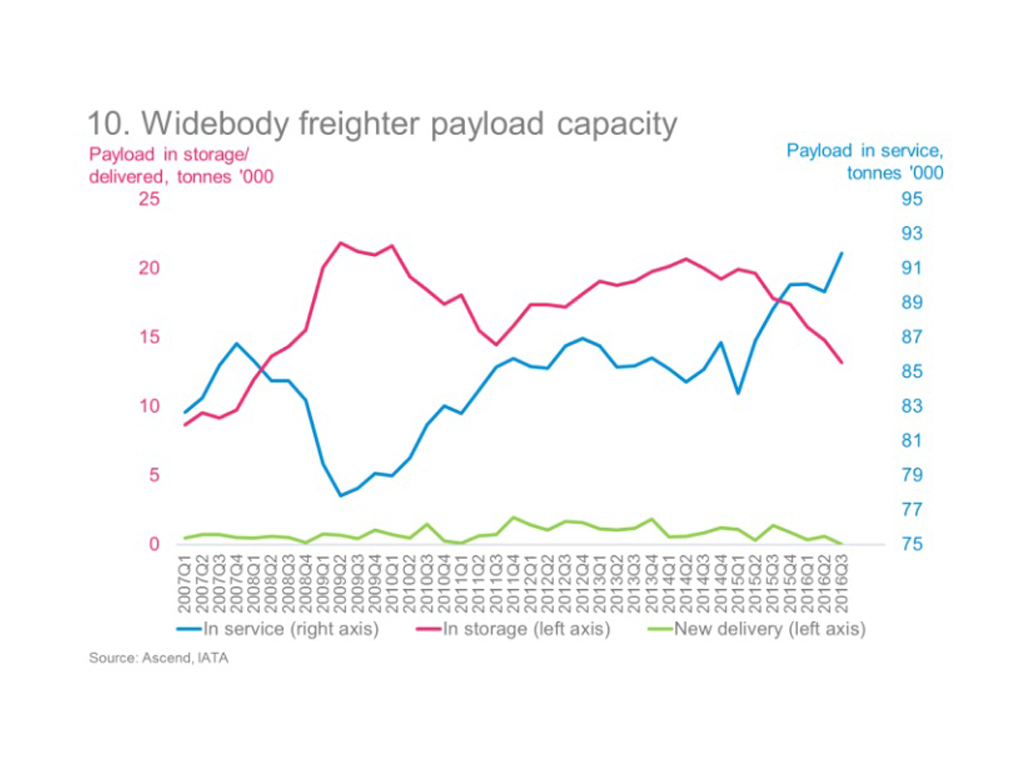 Flooding-in of capacity, weak trade, lower yields and rising fuel costs are the key risks for air cargo profitability, said IATA in its latest quarterly Cargo Market Analysis.
While the outlook for trade is sluggish, with global economic growth expected to decelerate in 2016, an expansion in export orders and strong consumer confidence may boost air cargo demand, it added. Air cargo is continuing to outperform growth in the world economy, said IATA.
The report’s authors expect a moderate upturn in global economic activity in 2017, driven by emerging economies. Slow expected acceleration in that growth and a flattening economic cycle in more advanced countries “point to weak mid-term tailwinds for air freight growth demand”.
Underlying drivers in the US economy such as strong household spending, jobs growth and signs of rising wages are all favourable although one downside is the UK’s vote to leave the European Union.
Meanwhile, the air cargo market recovered from a weak first quarter in 2016 in the second and third quarters. September data points to a 6.1% growth in freight tonne-kilometres (FTKs) although growth is now decelerating due to a weaker performance by domestic FTKs.
Year to September FTK volume growth was 2% compared to 2015, but that period saw a one-off boost from the US port strike.
Most of the FTK growth was with European and Asian carriers and, to some extent, North American airlines, while Middle East carriers saw a contraction in traffic handled in the third quarter compared with the second, in seasonally adjusted terms.
The bankruptcy of Korean container shipping line Hanjin does not seem to have had much impact on the airfreight market yet, but it is possible that this could change as stranded cargo is finally offloaded from vessels. However, there is no evidence of this happening yet, IATA stresses.
There is no let-up, meanwhile, in the amount of airfreight capacity coming on to the market, it continues. In-service widebody freighter capacity grew by 3.6% in the third quarter of 2016 compared with the same quarter of 2015, mainly because stored planes were returned to service and retirements of aircraft were deferred.
Deliveries of widebody passenger aircraft have also added a significant amount of belly capacity. Despite a reduction in the number of new planes introduced in 2016, new aircraft entering the fleet have on average more bellyhold capacity than their predecessors.
As a result, total available FTKs (AFTKs) grew 4.9% in the third quarter of 2016 compared with the same quarter of 2015.
Yields have meanwhile continued to deteriorate in 2016 and there are clear signs that this is damaging profitability, IATA says. Yields in September are 9% lower than they were in the same month in 2015. This is confirmed by a recent IATA survey of airline heads of cargo, which stated that there were worries over yield performance in the year ahead.