The air cargo industry is holding its own given the economic pressures it faced last year and despite a consistent drop in demand.

According to the latest industry analysis by Xeneta-owned CLIVE Data Services, in December, chargeable weight fell 8% year on year and the general airfreight spot rate registered its largest year on year decline of 35%. Capacity in December 2022 recovered to 93% of the 2019 level.

However, more positively the data provider pointed out that average rates for the month remained 75% above the pre-Covid level.

Niall van de Wouw, chief airfreight officer at Xeneta stressed: “It would be easy to take a pessimistic view of the global air cargo market’s downturn, but this would ignore where it has come from. There is little use comparing it to the same time last year because then we had no Ukraine conflict, no high energy prices, no soaring interest rates, nor the impact of the subsequent cost-of-living pressures.

“So, based on the global environment we see right now, airlines are still achieving rates 75% higher than pre-Covid. That indicates the glass is very much still half full. If, in January 2020, you had asked airline executives if they’d like to see airfreight rates across the Atlantic or from Asia Pacific 75% higher, we would have heard a unanimous ‘yes’. 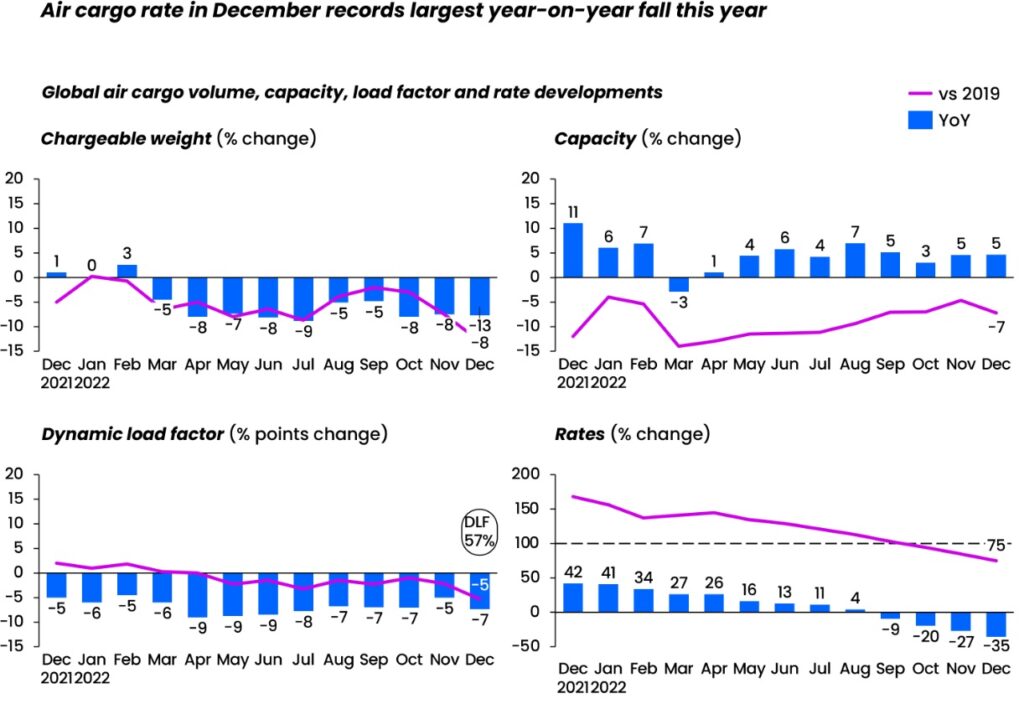 “The difference now is that there’s less pressure if you’re a shipper, even though you’re still paying more. In terms of the long-term sustainability of the air cargo supply chain, this will help.”

The future is “uncertain” though, according to CLIVE. The industry “will likely be impacted by the earlier Chinese New Year and growing concerns of rising Covid levels which, in China, is already impacting some factory production”.

Increasing capacity will continue to put pressure on the industry, but the decline in rates is “gradual” rather than rapid which has helped the industry adjust, said van de Wouw.

“Of course, we wish the air cargo industry a very happy New Year, but it’s clear it remains in a very unpredictable state given world events. We don’t see demand recovering quickly because of what is happening around the world, but we do expect to see supply continuing to come back into the market.

“This, of course, will put further pressure on load factors and rates. So, we struggle to see where the tailwinds will come from, but looking at the broader perspective, we still see a very efficient air cargo market, especially when compared to the 70-80% fall in ocean rates in the past 8-9 months.

“The fact that the airfreight domain is more competitive and more fragmented on the supply side meant rates didn’t go as crazy as we saw with ocean container prices, so the decline, now airfreight volumes are lower, is more gradual. Air cargo is much stronger than it was pre-Covid, but the current direction of the market means there is some degree of good news for everyone.”

Airfreight spot rates on top volume corridors declined more sharply in December, according to CLIVE. Outbound Asia Pacific spot rates have been falling for eight consecutive months, with spot rates from Asia Pacific to North America of USD 5.38 per kg for the final month of the year down 13% since October.

On the Asia Pacific to Europe corridor, the average December spot rate dropped 10% compared to October to USD 4.67 per kg, -46% year-on-year but, again, remaining a strong 92% above the pre-pandemic level.

Reducing winter flight schedules contributed to some resilience to this year’s market headwinds on the Europe to North America corridor. December’s airfreight spot rate stood at USD 3.25 per kg, up 7% over the October level. Replicating the market trends on the other main lanes, this rate was -46% versus a year ago but still 80% up on 2019. 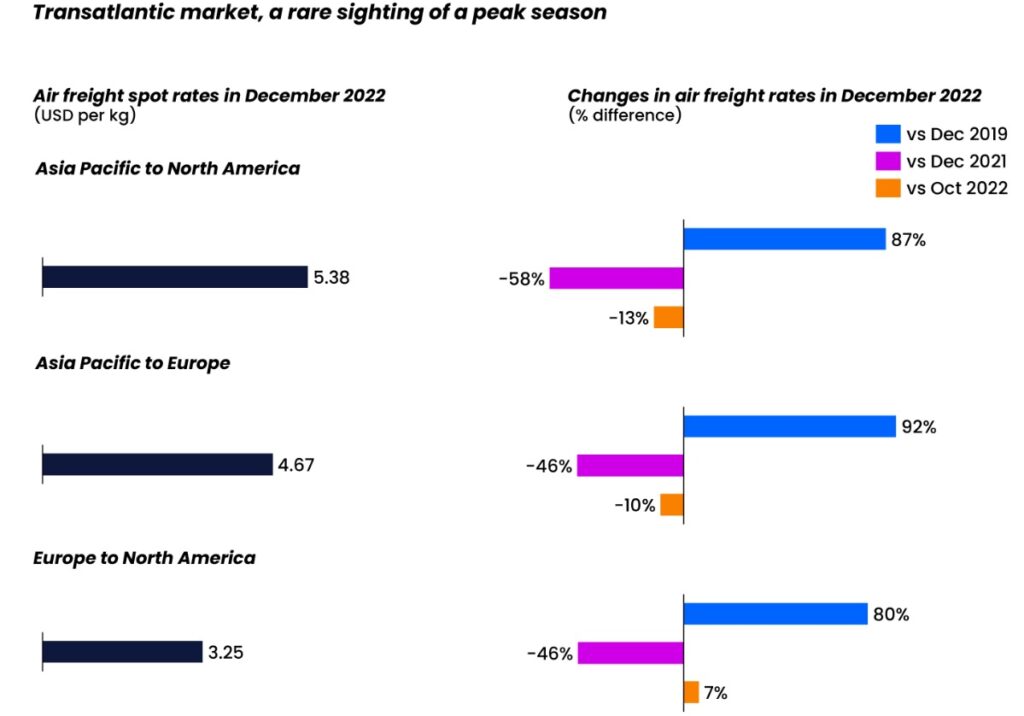