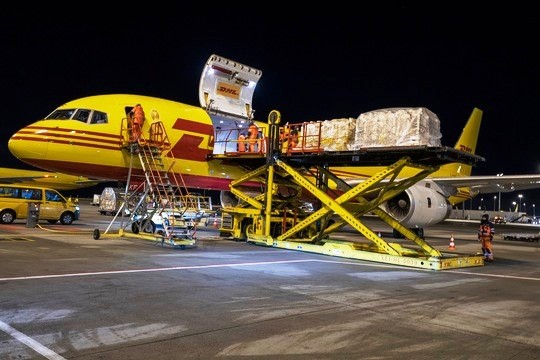 Deutsche Post DHL Global Forwarding has reported large increases in its airfreight revenues, profits and volumes in the first quarter as higher demand and lower capacity benefited the company.

The forwarder, which could this year lose its status as the airfreight market leader due to Kuehne+Nagel’s plans to acquire Apex, saw first-quarter air cargo volumes increase by 18.2% to 494,000 tonnes. First-quarter air revenues improved by 59.3% on last year to €1.8bn and gross profits were up by 27% to €287m.

The company said that revenues were up mainly because of increased demand from Asia and the US.

“At the same time, available market capacity remained at a low level on account of the limitations on passenger flights,” it said.

It should also be noted that the industry began to feel the affects of the Covid outbreak on volumes in the first quarter of last year, which will have had an impact on comparisons.

In comparison, Kuehne+Nagel saw first-quarter air volumes increase by 16% year on year and DSV Panalpina registered a 6.6% decline as it discontinued some Panalpina business following the two companies’ integration.

The overall DHL forwarding and freight division saw revenues for the period increase by 32.7% year on year to €3.6bn and earnings before interest and tax (ebit) were up to €216m from €74m last year.

On its ebit performance: “Proactive capacity planning, optimised procurement and strict cost management played a role here, as did higher volumes in all areas.” 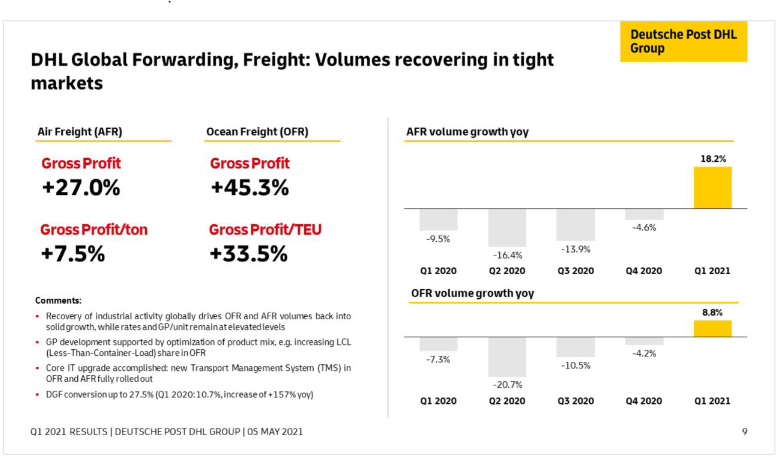 The company said it had benefited from the continued strong momentum in global e-commerce and the simultaneous recovery in world trade.

Frank Appel, chief executive of Deutsche Post DHL Group, said: “We had the best opening quarter ever and were able to unleash our full strength as a Group. All five of our divisions are on track for growth and are ideally positioned to benefit from the continuing boom in e-commerce and the resurgence in global trade.

“Because of our strategic investments in our networks, we are today in a position to benefit from the surge in demand, while simultaneously improving our efficiency.

“We expect further growth in the coming quarters, even with growth rates normalising over time. We are therefore stepping up investments in our infrastructure to be able to continue to optimally serve higher shipment volumes.”

All five divisions were able to increase revenue and achieve a positive earnings performance.

“The Express, eCommerce Solutions, and Post & Parcel Germany divisions especially benefited from the sustained momentum in e-commerce leading to a sharp rise in shipment volumes in the national and international parcel business,” the company said. “Thanks to the high utilisation of their networks, the divisions achieved a significant jump in earnings.”