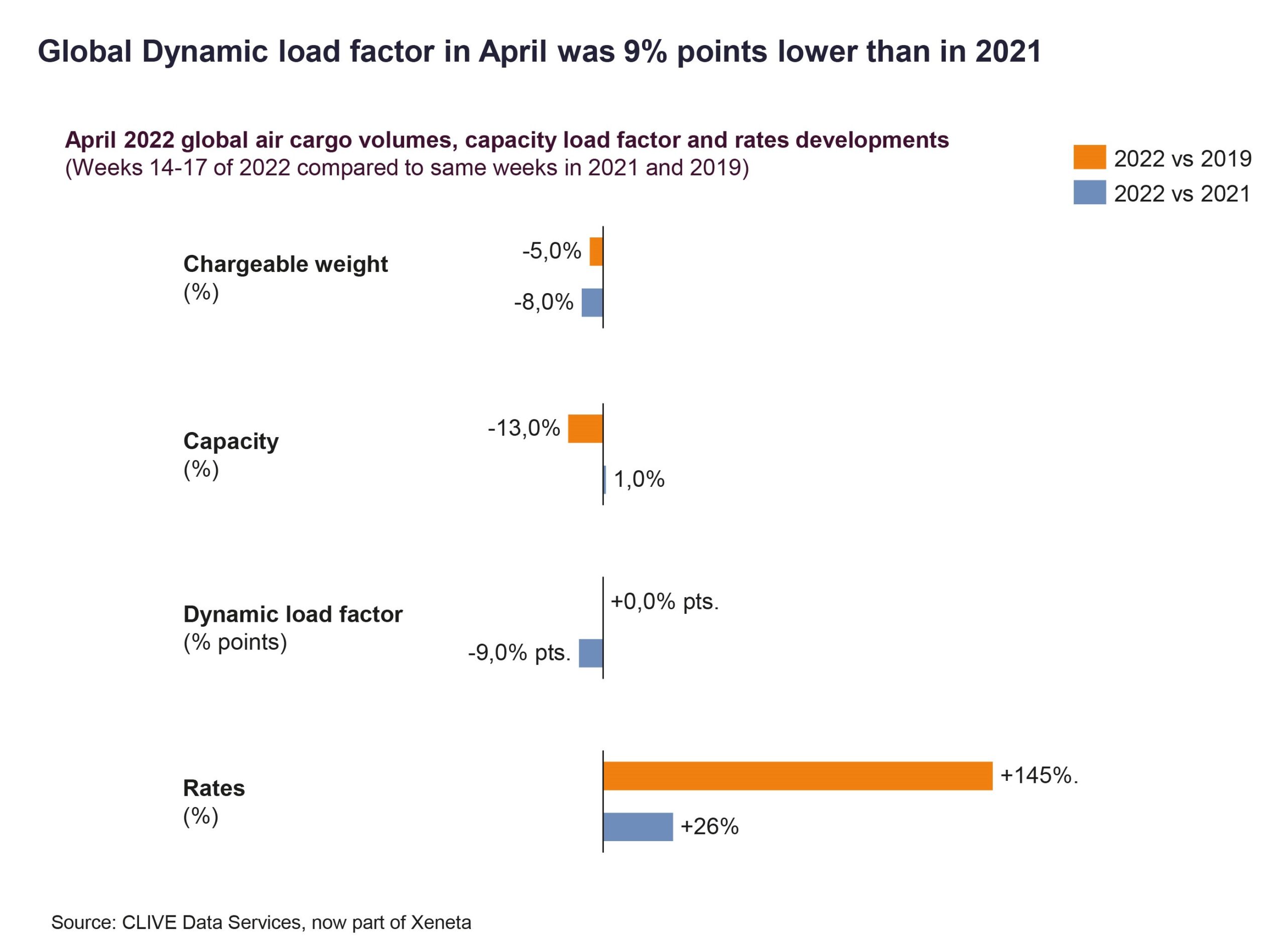 The air cargo industry continues to be buffeted by a range of issues that resulted in volume declines deepening in April, according to figures from CLIVE Data Services.

The Xeneta-owned data provider’s latest numbers show that air cargo volumes decline by 8% year on year in April following on from a 4.5% fall in March.

Meanwhile, capacity increased by 1% year on year in April, resulting in a nine percentage point fall in the global dynamic load factor – taking into account both weight and space –  to 62%.

However, load factors were “exceptionally high” in April last year at 71%.

CLIVE said that the conflict in Ukraine and Covid restrictions, and the rising cost of living were all having an impact on air cargo.

The fall in demand is likely “exacerbated by the staff shortages jolting airport handling services and manufacturing production”.

Despite the lower volumes and load factors, airfreight rates in April increased by 26% on last year.

“The rationale behind lower load factors and higher rates is the bottleneck on the ground – which appears to be being caused now by not only the shortages of people handling cargo at airports around the world and the severe lack of truck drivers to move the goods, but also by a wider shortage of people for lower paid logistics jobs,” said Niall van de Wouw chief airfreight officer at Xeneta. “We are now seeing this larger theme impacting the entire supply chain.”

Shortages of goods in stores or available online, longer lead times for some products, higher shipping costs, and flight delays and cancellations are all consequences of these market conditions, he added.

“The hike in living costs and lower disposable incomes for consumers are other undoubted contributors to the slowdown in volumes.”

Looking ahead, van de Wouw said that the re-introduction of passenger services for the summer season would also begin to impact the market.

On the transatlantic, for example, load factors dropped by 12 percentage points in one month.

“This was caused by a big jump in North Atlantic passenger capacity as airlines stepped up their summer schedules,” CLIVE said.

Additional passenger flights are also expected to “takes some of the heat out of the demand/supply market,” he said, and potentially lead to a downward pressure on rates.

“During the last week of March, capacity increased by 15% compared to the previous week,” said van de Wouw. “This significant increase in space reinforces our previously stated forecast that the North Atlantic market will most likely be the first to return to some kind of normal, because of the high share of belly capacity on this lane.

“In terms of the dynamic load factor, we are seeing this shift starting to happen as we move from a Seller’s market to a Buyer’s market for air cargo. However, the issues on the ground might delay the Buyer’s market a bit longer.”