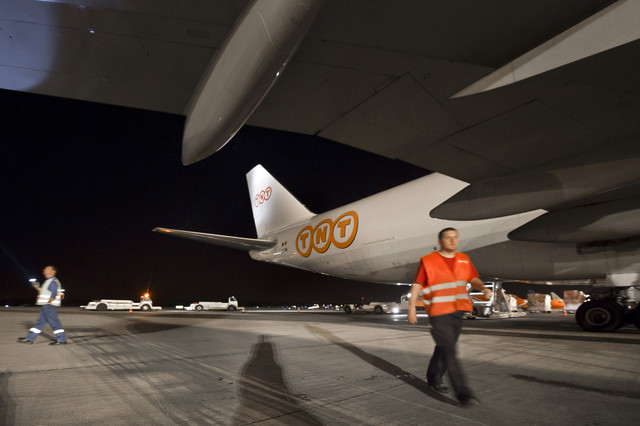 FedEx has already identified potential purchasers of TNT Express’ air operations, says FedEx chief executive David Bronczek.
He was speaking at a press conference to announce US-based FedEx’s $4.8bn takeover of European rival TNT Express in a deal set to complete in 2016, subject to regulatory approval.
However, it is not yet clear whether a third party purchaser would continue to operate the aircraft on behalf of the two express players or whether the whole freighter operation would simply be disposed of.
A TNT spokesman said: “TNT has 54 aircraft in its fleet (owned and leased), including three B777 freighters, B747s, and a combination of BAe 146, Boeing 737 and Boeing 757 jets.
“TNT’s airline will be divested, in compliance with applicable airline ownership regulations, but TNT’s Liege hub will be maintained as a significant operation in the combination, particularly with regards to intra-European traffic.”
The spokesman added: “FedEx and TNT will be integrated. The details of how our operations will work together will be determined during the integration planning process, so it’s too early to answer (the) question.”
Third party air carriers are used by the express industry in Europe, chiefly to circumvent regulations that prevent intra-European airlines being owned by non-European companies.
The eight euro a share offer that FedEx proposes is below the €9.5 that UPS was willing to pay for TNT Express 2½ years ago, before European regulators blocked the bid.
However, TNT chief executive Tex Gunning says the current share price offer reflects the “lower synergies” of the FedEx deal and the fact that the European economy has become “more complex” since then.
The offer is also about a third above the value at which TNT shares were trading prior to the deal. TNT shares had been losing value in the face of profit warnings and the deteriorating economic situation in Europe.
The two chief executives were at pains to stress that FedEx-TNT would not be the third placed operator after UPS and DHL but “a third competitor”, implying that the merged company could have a larger market share than either or both of those two companies.
Neither chief executive would comment on what share of the European or global market FedEx-TNT would have. However, one analyst but FedEx’s current share of the European market at only two per cent while TNT’s was around 15 per cent.
One small complication to the planned takeover of TNT Express by US rival FedEx is that a court case mounted by UPS against the European Union regulators for blocking its 2013 bid is still running. However, TNT chief executive Tex Gunning said: “I don’t think it will de-rail the deal.”
Both Gunning and Bronczek anticipate that the approach to the Brussels competition watchdogs would be identical to the failed UPS proposal and that they would apply any necessary remedies. However, they do not anticipate any significant regulatory issues. The EU competition authorities would be notified of the plan later today, they added.
Competition authorities in other parts of the world, such as China and Brazil, will also be notified.
Again, the two chief executives did not anticipate any significant problems – although it is worth pointing out that in the shipping world, the Chinese authorities recently torpedoed a proposed alliance between three of the world’s biggest container operators that had been cleared by regulators in Europe and the US.