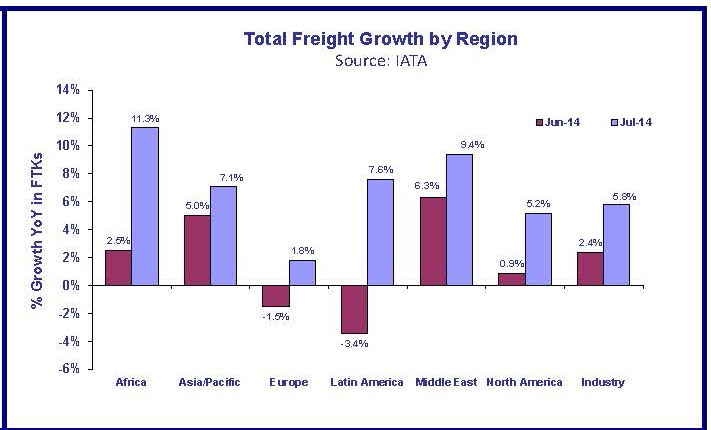 Global air freight markets showed a strong increase in July, with freight tonne km (FTKs) up 5.8 per cent, more than twice the rate of prior month June.
Latest data from the International Air Transport Association (IATA) indicates that the strong growth mirrors positive developments in some key regional economies but also highlights a “sharp divide” among air cargo markets.
Said IATA: “After a slowdown at the start of the year, global business confidence and trade are showing signs of improvement again, especially in Asia-Pacific. Global air cargo volumes have now surpassed their previous July peak, in 2010, and look set to continue to increase.”
European air freight continued to grow at a slower “anaemic” pace, managing 1.8 per cent in July, reflecting “the effects of the Russia-Ukraine crisis (including the impact of mounting economic sanctions), which is adding to economic weakness in the Eurozone,” said IATA.
It added: "Overall, July saw growth accelerate. That’s good news and it reflects the continued strengthening of business confidence at a global level. But the air cargo industry is moving at two speeds with a sharp divide in regional performance.
“European carriers reported anaemic growth of just 1.8 per cent while all other regions reported solid gains of five per cent or more on the previous year. In particular, the 7.1 per cent growth reported by airlines in Asia-Pacific is encouraging as it demonstrates a recovery in trade and a positive response to China’s economic stimulus measures," said Tony Tyler, IATA’s director general and chief executive.
IATA’s figures follow a positive analysis of July’s air cargo performance by Netherlands-based research house WorldACD, which uses primary data supplied from airlines worldwide.
It reported that transpacific air cargo registered a 25 per cent revenue growth in July, as global freight income rose almost nine per cent versus prior month 2013. Global volume in July increased six per cent year on year, accompanied by a US$-yield improvement of 2.9 per cent.
Did you find this article of interest, if so why not register for a FREE digital subscription to Air Cargo News? – Find out more
Interested in Freighters, if so why not register to attend the Freighter & Belly Cargo World Conference ? – Find out more