According to the latest weekly market data from Xeneta-owned CLIVE Data Services, general airfreight spot rates fell 9% year-on-year in September, to below the 2021 level for the first time this year, as returning global cargo capacity continued to outpace air cargo volumes.

There are “no indications” that demand will increase again, despite August demand figures suggesting a better than expected end to the year, said Niall van de Wouw, chief airfreight officer at Xeneta.

In addition to the expectation that demand will remain flat and air cargo capacity continues to return, the easing congestion in the oceanfreight market will also see it take back some business that  moved to air cargo during the worst of the delays, he added. 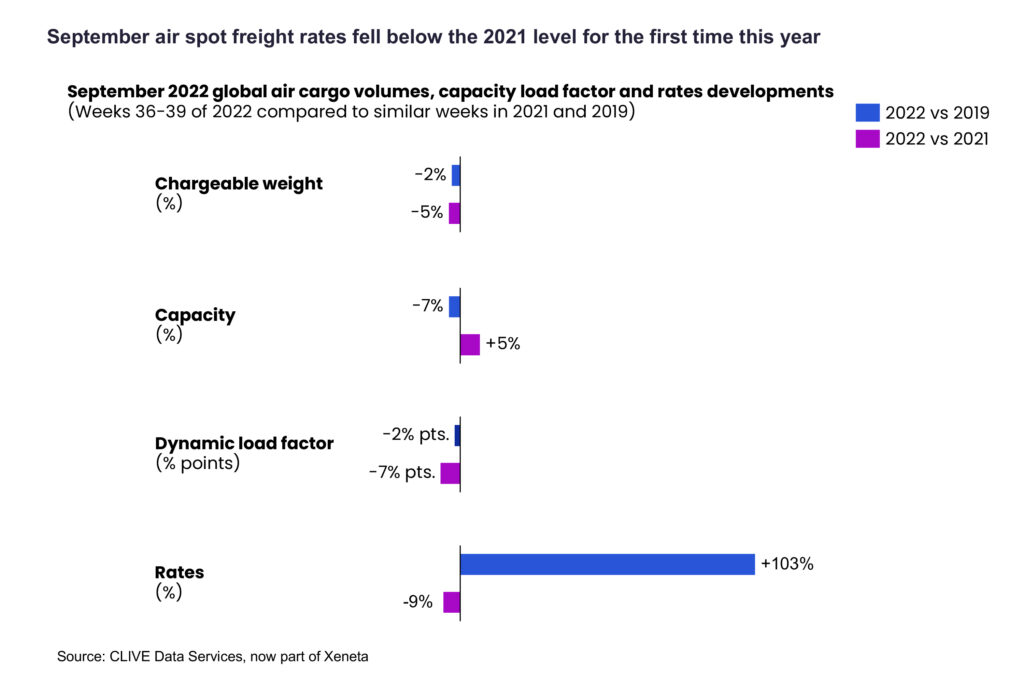 Spot rates have been falling gradually since the beginning of this year, pointing to a deteriorating air cargo market. 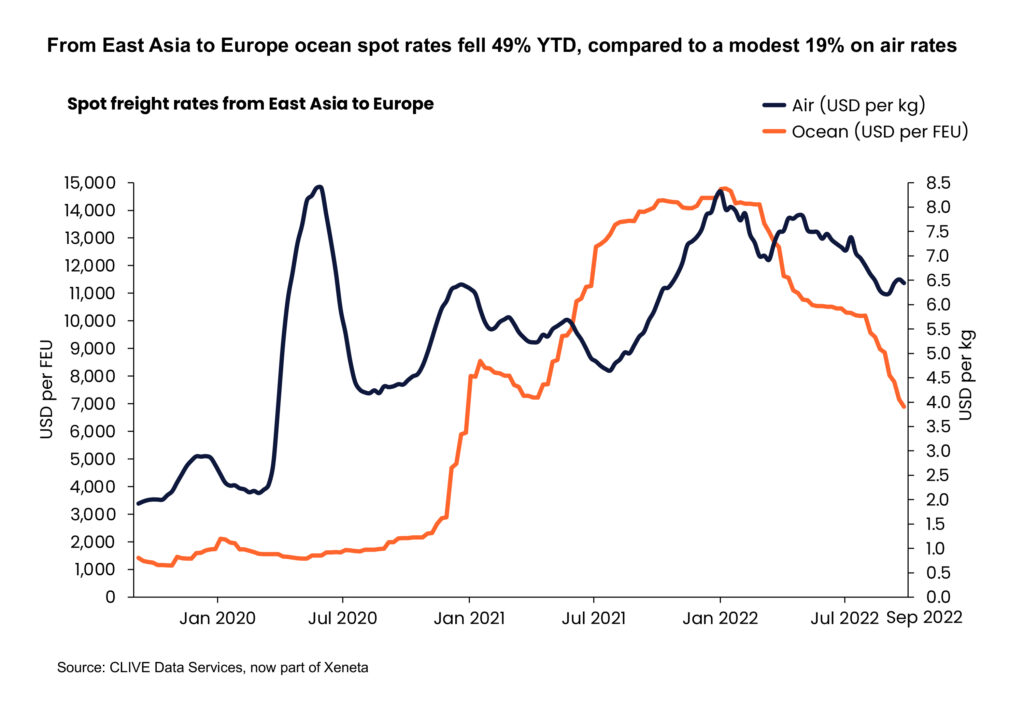 In September, ocean spot rates from East Asia to Europe fell 49% from the January level, while air freight spot rates were 19% lower.

The market, however, will be strongly influenced by returning air cargo capacity, noted CLIVE

Taking Japan as an example, routes to Europe have been impaired by the Ukraine war, causing a 12% reduction from Q1 to Q2.

In June, Japan began easing part of its severe Covid restrictions to welcome guided tourists and, since then, passenger aircraft belly capacity to Europe improved by 7% in Q3, recovering to 38% of the pre-pandemic Q3 2019 levels.

In accordance with this, Q3 airfreight spot rates declined 28% compared to Q2. Looking ahead, the further removal of travel restrictions for individual tourists will further boost the capacity recovery from long-haul widebody flights.

The overall decline in general airfreight volumes came as airlines reintroduced passenger and cargo capacity from East Asia, most notably at the end of the month ex Hong Kong, Japan and Taiwan after their governments announced plans to lift coronavirus restrictions.

Declining demand and increasing capacity had the expected impact on CLIVE’s ‘dynamic load factor’ analysis, which measures both the volume and weight.

“What we see is a very ‘jumpy’ air cargo market which responds very quickly to global events, whether this is the escalation of the conflict in Ukraine, rising inflation, the pressure on Sterling, or the stronger US dollar,” said Niall van de Wouw, chief airfreight officer at Xeneta.

“It’s still early to judge how such events will be reflected in the airfreight market over the rest of this year but we see no indications that demand will pick up from a macroeconomic perspective.

“We also see the ocean market changing very rapidly and we expect its reliability to go up, which will see certain volumes pushed to air cargo by necessity go back to ocean.

“We see a flat air cargo market in terms of demand, but the fall in general airfreight rates and load factor are likely to be exacerbated by the continuing return of capacity, even as we head towards a winter season when, traditionally, we would expect to see cargo space in the prime Europe and North America markets cut back.

“Shippers who have held their nerve and not shipped their peak season goods early by air are likely to find themselves in a stronger buying position.”