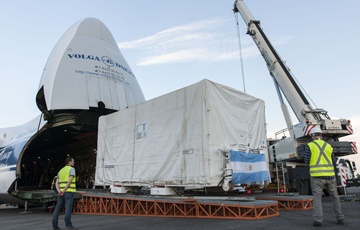 The first space satellite to be manufactured in Argentina has been delivered safely to a launch site in French Guyana by the Ruslan International joint venture of  Volga-Dnepr Airlines and Antonov Airlines.
A bespoke transport container was assembled to carry the 40 tonne payload on a An-124-100 freighter. The Arsat-1 satellite was loaded at San Carlos de Bariloche airport; having been manufactured by INVAP SE, it is due to be launched later this month and will be used to support telecoms, media and data transmission across several Latin American countries.
‘We’re delighted to have managed this high-profile charter operation’, commented Chapman Freeborn’s Brazil country manager Maria Faria. ‘I would also like to thank Volga-Dnepr for its support in making this operation a huge success.’