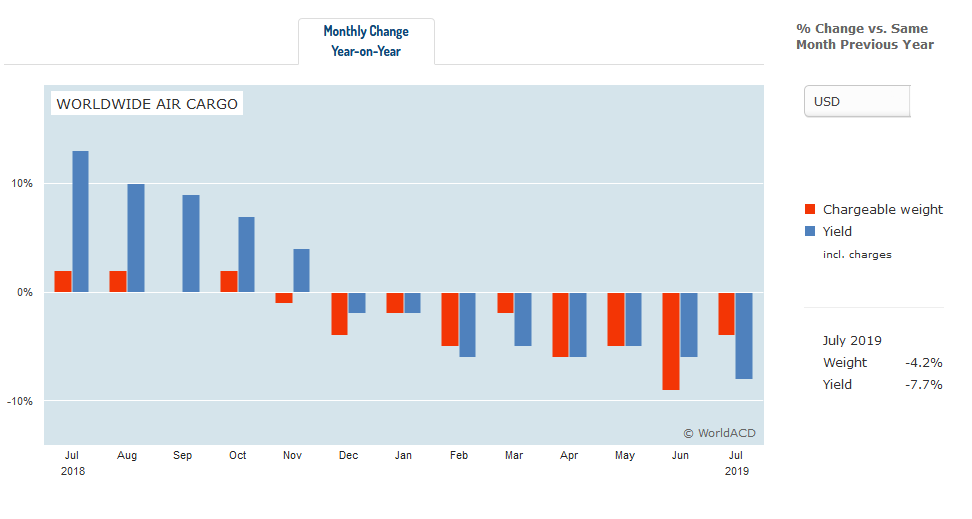 Air cargo demand declines appeared to slow in July, but the timing of weekends and holidays may have had an impact on the monthly performance.

The latest figures from WorldACD show that air cargo demand declined by 4.2% in July, which is an improvement on the 8.9% fall reported in June.

However, the analyst warned that performance in both months may have been affected by the timing of the Whitsunday holiday, which this year in fell in June rather than May.

However, the company warned that worse could be set to come as products transported by air cargo are increasingly dragged into the US-China trade war.

“Upheaval in international relations has been the order of the day this year. And even though the worst effects of the US-instigated trade war(s) may still have to reach air cargo, the general sentiment in the world is obviously not doing the industry a whole lot of good,” WorldACD said in its monthly report.

“Now that consumer goods have also been targeted for tariff increases, air cargo figures as from August may well take an even deeper dive than shown so far.”

WorldACD added that there were differences in performance when analysing figures by region and by cargo sector.

It said that special products continue to outperform general cargo, with the former improving by 3.5% year on year in July while the latter declined by 7.4%.

“Not surprisingly, we observe a growing interest in the air cargo sector to understand in detail the market dynamics in the various special cargo categories,” WorldACD said.

Derivatives trading platform the Baltic Exchange has launched weekly airfreight indices to allow companies to hedge against rate swings. The…