DHL: global trade at a crossroads 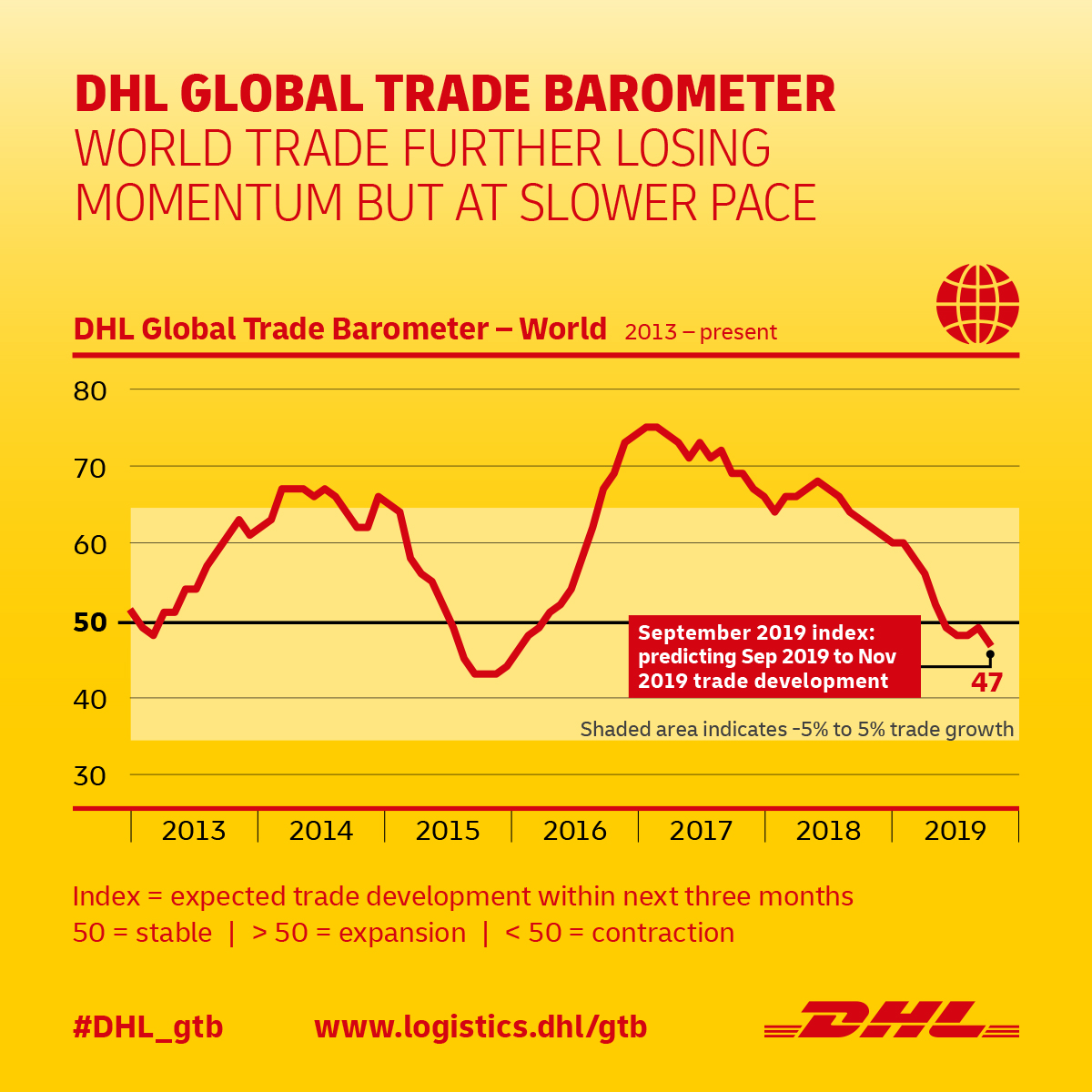 The September edition of the DHL Global Trade Barometer (GTB) says world trade is at a “crossroads”, with the downward trend continuing – but slowing.

In the June update, the index fell by 8 points, whereas this latest assessment shows the overall index decreasing by just one point, to 47. That deceleration is spreading, DHL said. Five out of seven countries (the US, China, South Korea, Germany and India) are now in negative territory, but all countries are sitting close to 50 points – the threshold for growth.

There are modal differences too: a decline in global air cargo trade led to the index for this mode dropping four points to 45, while worldwide ocean trade held steady at 48 points.

Eswar S Prasad, professor of trade policy and economics at Cornell University in Ithaca, New York, commented: “China-US trade tensions have ratcheted up to higher levels and are already affecting global supply chains as businesses adjust to the new reality that both sides are digging in for a long trade war. Rising trade tensions in other parts of the world, including between Japan and Korea, and the looming prospect of a messy Brexit, are likely to have an increasingly disruptive effect on world trade volumes.”

British trade has seen a slowdown in consumer fashion goods, industrial raw materials and automotives owing to the persistent uncertainty surrounding the UK’s departure from the EU, but remains in the positive at 53 points. The country’s temperature- or climate-controlled goods, along with its chemical industries, are “robust” drivers of its air cargo trade, but air exports of high-tech and machinery parts are expected to stagnate. DHL predicts that air imports will contract.

Japan, meanwhile, is also at 53 points. It has seen an uptick in ocean trade in response to growing demand for industrial raw materials – but other industries in the Far East nation are expected to contract, DHL said.

As for China and the US, these two countries presented the most negative trade outlooks in September (45 points). DHL expects US trade to shrink further, and Chinese trade to register a moderate decline – largely driven by the weak performance of Chinese air trade, which has dropped by 8 points to 43 over the past three months.

“The level of uncertainty about macroeconomic growth prospects has driven down business investment around the world, with adverse effects on cross-border trade of machinery and equipment,” Prasad summed up.

“Overall, this GTB update confirms the slowdown in global growth and heightens concerns about growth stagnation in the coming months,” Prasad cautioned.

“Although the DHL Global Trade Barometer has further decreased – with an index value of 47 points – world trade is still closer to staying at its high level. This strengthens our conviction that globalisation will go on and that logistics will remain its key enabler also in the future.”

The next GTB update will be released at the end of November 2019.