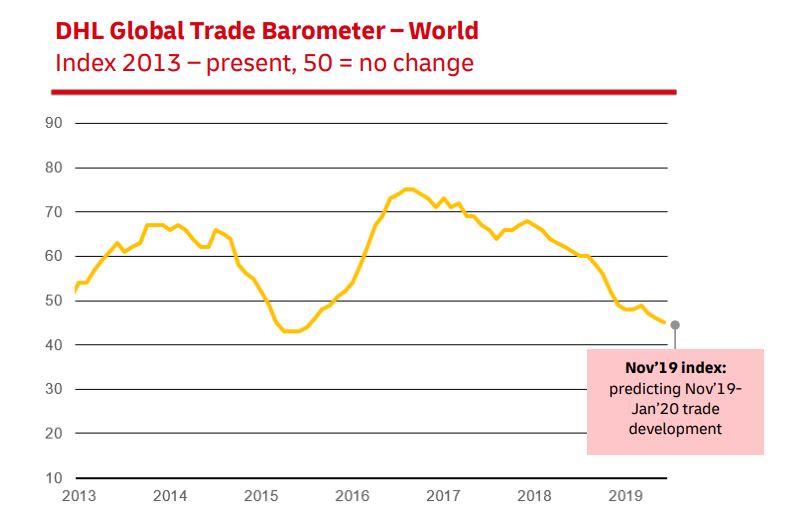 Global air trade has been reduced by three points to a new index volume of 45, the DHL Global Trade Barometer (GTB) has reported. It also predicted a further contraction in overall global trade for the next three months.

“Global trade continues to lose momentum, albeit mildly,” the report stated. “Against the previous updates, the downward tendency is largely moderate and steady, neither indicating an acceleration of the decline nor a bottoming out.”

Aside from India, all surveyed countries were affected by the deceleration and recorded indexes below the 50-points-threshold of no growth.

“However, the rapid growth world trade has undergone in recent years was like climbing the Mount Everest. Now, we are on the descent, but we are still breathing altitude air.”

Although Japan and the UK were the only countries with positive trade outlooks in the previous update in September, the two countries recorded the highest losses in this period.

The report added: “The latest DHL Global Trade Barometer update shows that international trade flows have been adversely impacted by these factors. The declining indexes for China and the US, the two main drivers of global growth, portend a worsening global economic outlook. Overall, this GTB update paints a sobering picture of gloomy prospects for the world economy and global trade for the remainder of this year.”