Airfreight demand grew at its highest pace in 18 months in October, with European and Asia Pacific airlines once again accounting for the bulk of the increase.
The latest IATA statistics show that in October, air cargo traffic in freight tonne km (FTK) terms increased by 8.2% year on year, which is the highest pace of growth since the industry received a boost from the closure of west coast US seaports in February 2015.
This follows on from analyst WorldACD reporting a 6.2% in airfreight tonnes in October.
During the month, European airlines registered a demand improvement of 13.4% compared with a year earlier, while there was a jump of 7.8% for carriers based in the Asia Pacific region.
There was a 9.2% improvement for Middle Eastern carriers, North American carriers registered a 3.7% increase and there was a 7.4% improvement for African airlines.
The only region to record a decrease during the month was Latin America where traffic was down by 0.1%.
Click here or on the image below to view interactive dashboard 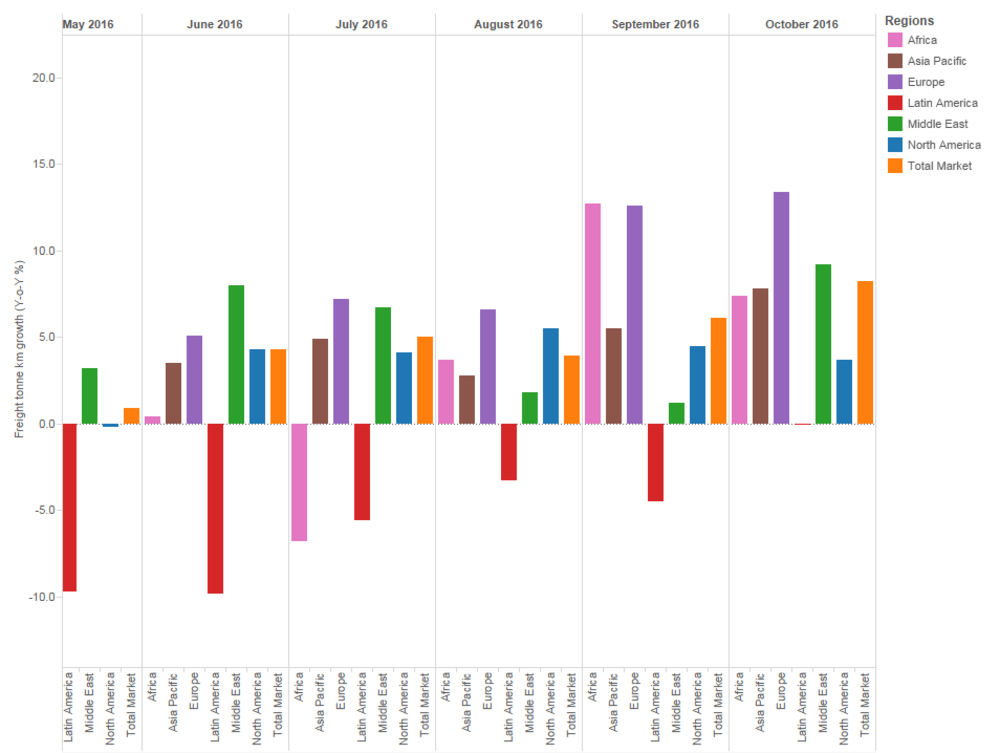 For the year-to-date, total market demand has now reached an improvement of 2.7% on last year.
IATA said that manufacturing indicators suggested the demand improvements could be carried into next year:
“The upward trend in seasonally-adjusted FTKs has strengthened over the past three months.
“This is consistent with the pick-up in the new export orders component of the global purchasing managers’ index (PMI) since the middle of the year.
“This component reached a 26-month high in November, albeit just slightly ahead of where it stood this time last year.
“All told, if sustained, the survey results suggest that air freight will carry some momentum into 2017.
“More generally, October’s data tie in with broader signs of a stronger-than-expected peak season for airfreight in 2016.
“This may in part be explained by some one-off factors, including some potential mode shift to airfreight this year following the collapse of the Hanjin shipping company in late August.
“Others have also suggested that weak market conditions earlier this year may have caused some complacency amongst companies ahead of this year’s peak season, and thereby led to more of a last-minute reliance on airfreight.
“But equally, the strong October data may be an early sign of a shift in the industry business model and a pivot away from the traditional drivers of growth.
“Anecdotes from the industry have reported strong growth in cross-border e-commerce and pharmaceutical flows.
“Moreover, with sales events such as Black Friday and Cyber Monday only becoming more popular, this year may also be a sign of more intense peak periods in the future for more traditional items such as apparel and consumer electronics.”
However, the organisation also warned that there were some indictors that suggested trade growth had more or less slowed to a standstill.
The faster pace of demand growth had also led to improvements in cargo load factors, which climbed to 46.2% in October – a high for 2016.
This compares with 43.7% in September and 44.9% in October last year.
Asia Pacific carriers continued to report the strongest load factors at 56.1%, just ahead of European carriers at 47.9%.
Middle Eastern airlines had cargo load factors of 46.2%, North American carriers reported load factors of 35.3%, Latin America was at 41.2% and Africa at 27%.

IATA has highlighted the need to re-establish passenger network connectivity to boost bellyhold capacity and ultimately airline revenues, as cargo…

High ocean freight rates caused by service disruption is helping push forwarders and shippers to use airfreight. In its latest…