The freight forwarding market is expected to improve in the rest of this year but the overall picture “remains bleak”, according to a new report from consultant Transport Intelligence (Ti).

It said a more positive second half of the year is expected as the global economy reopens following the easing of lockdown restrictions, but the picture remains bleak across air and sea forwarding.

Overall, it is predicting a decline in the freight forwarding market of 10.2% for the full year, which compares with a pre-Covid forecast of 2.5% growth.

Looking at airfreight, the consultant is predicting a drop off of 13.9% this year. 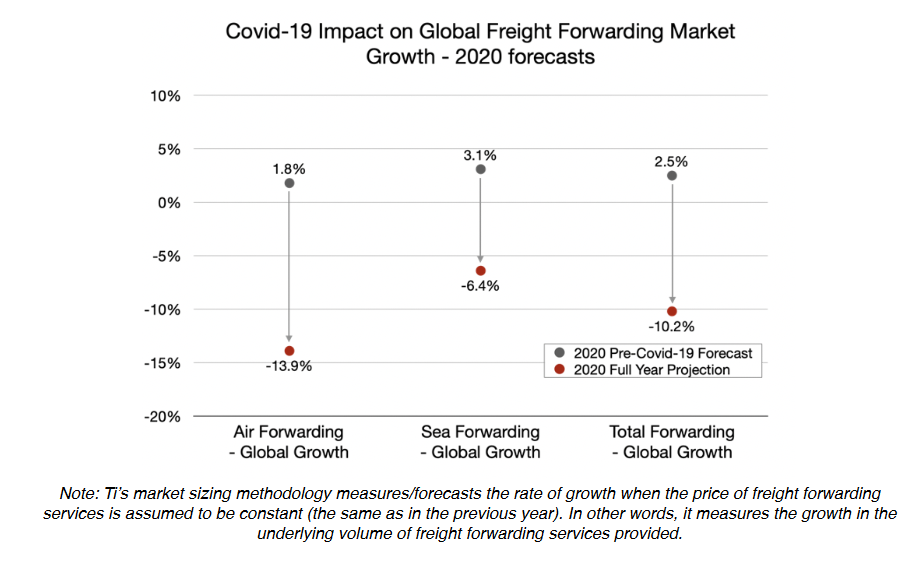 “This is the largest annual contraction since the global financial crisis in 2008-2009,” Transport Intelligence said.

“It is also the second consecutive year of global air forwarding contraction – 2019 saw the market shrink 4.1% in real terms as the US-China trade war and a slowdown in global automotive sales began to bite.

“Over the first half of 2020, the global air forwarding market shrank 15.3%. Although the pace of contraction looks set to slow in the second 6-months of 2020, there are no guarantees, particularly as a second-wave of Covid-19 infections looks perilously close in Europe and North America.”

Ti added that the European airfreight market had been the hardest hit during the first half of the year, contracting by 20% in the first half as the region’s big five economies were hit hard by the outbreak.

“With demand collapsing as lockdowns kicked in, inventories grew to record high levels meaning requirements for airfreight movements waned,” the consultant said. “Furthermore, with capacity squeezed and prices increasing, there appears to have been an element of modal shift away from air freight. Increases in volumes of healthcare-related goods, such as PPE and cross-border e-commerce volumes only partially offset this slide.”

However, while the sector may have been suffering on the volume front, higher rates have to a large extent protected revenues and in many case also improve profitability.

The speed at which capacity returns will be a key driving factor in how revenues develop in the future, Ti said, although it is not expected that passenger airlines will re-introduce capacity too quickly.