Hong Kong International Airport (HKIA) maintained its position as the world’s busiest cargo airport last year, but challenging market conditions led to an overall decline in demand at the top 20 hubs (full list below) in 2019.

Statistics from Airports Council International (ACI) show that the top 20 cargo airports saw their cargo volumes decline by 3.9% year on year in 2019 as they handled a combined 48m metric tonnes of cargo.

The decline shouldn’t come as too much of a surprise, given the ongoing trade war between China and the US and various other countries.

The top three airports from 2018 maintained their position last year.

Second-placed Memphis Airport reported a decline of 3.3% year on year to 4.3m metric tons and third placed Shanghai Pudong was down 3.6% on 2018 to 3.6m tonnes.

Of the top 10, the only airports to record increases in cargo volumes last year were UPS home hub Louisville, which benefited from growth in e-commerce demand, and Doha, which is the home of fast expanding Qatar Cargo, now the world’s largest cargo airline (excluding integrators) in terms of volumes.

Guangzhou in 16th place also saw its cargo volumes improve last year as its importance as a freighter hub continues to grow.

ACI also released stats for the first quarter of the year, which show the impact of the coronavirus outbreak on cargo hubs.

Louisville, Incheon and Narita were the only airports in the top 20 that managed to escape cargo volume declines during the period. 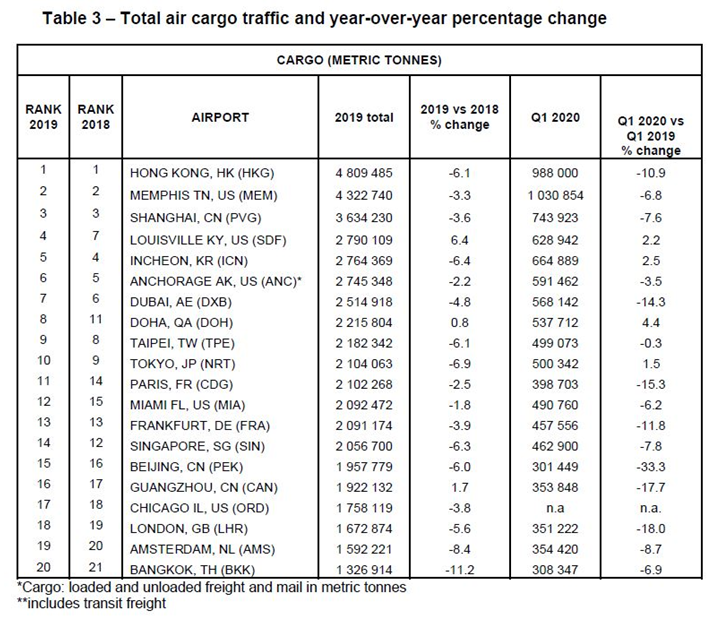