Top 25 airfreight forwarders 2018: K+N continues to close in on DHL

The world’s largest airfreight forwarders had a bumpy landing in 2018 following on from a stellar 2017 (full chart at end of article).

Based on figures from consultant Armstrong & Associates, the leading 25 airfreight forwarders recorded a 4.2% increase in volumes to 16.7m tonnes last year.

In most years this would be considered a very good performance, but the result follows on from a strong increase of 11.1% in 2017.

Last year started strongly with growth of around 5% in the first quarter before dropping off to around 1% in the final quarter of the year.

DHL Global Forwarding managed to maintain its position as the world’s largest airfreight forwarder despite its main rivals continuing to close the gap.

The Germany-based company registered a year-on-year decline of 4.4% in airfreight volumes to 2.1m tonnes, which was the biggest drop of any forwarder on the list.

Its closest rival, Kuehne+Nagel, was up by 11% to 1.7m tonnes and there was a 0.3% increase at number three placed DB Schenker to 1.3m tonnes.

The number four air forwarder, Panalpina, was up 4.3% to over 1m airfreight tonnes for the first time in its history.

Kreis said: “On the airfreight side, the shrinkage of the business is very predominantly associated with our own internal decisions, and so it’s not a statement on the market.

“There has been this focus on yield, which we have pursued especially in the last one-and-a-half years, since Tim came on board.

“The focus for 2019 is to slowly get back into growth territory so to change the sign, [although] we don’t have to grow in line with market yet.

“The focus is really on keeping the good profitability levels we have achieved, but getting from a shrinking position into, again, a growing position. That’s the top priority, get into profitable growth mode.”

See next month’s digital edition of Air Cargo News for the full report. Sign up for free. 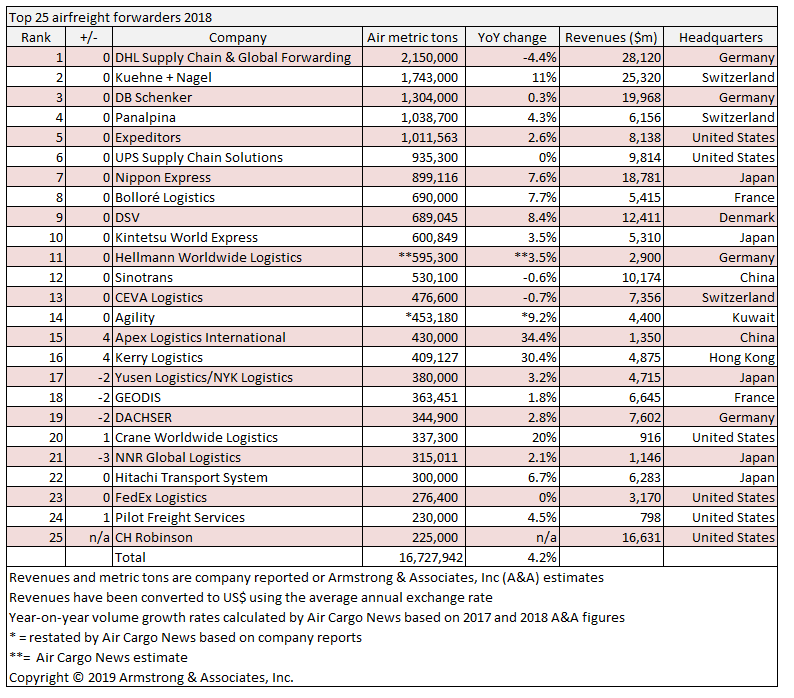