Figures from analyst CLIVE Data Services show that demand decreased in November by 1.2% compared with October, reversing the usual trend of demand rising as the year draws to a close.

Mirroring this decline, dynamic load factors, which take account of both weight and volume, dropped by two percentage points on October to 66%.

However, a decline in load factors is typically followed by a decline in rates, but CLIVE figures show that prices increased by 8% compared with October.

The analyst believes that congestion is driving up rates and has stunted growth by causing a backlog of volumes.

This comes as airports and handlers at major hubs around the world struggle to manage the amount of cargo being processed, as demonstrated by this recent footage from Heathrow posted on LinkedIn.

Meanwhile, there are also reports of ULD-pallet shortages as containers get tied up in the system.

“This unexpected month-over-month shift is not due to a lack of demand, it is almost certainly because cargo cannot be pushed efficiently through the system,” he said.

“This is also what we’ve seen reported in the oceanfreight market at US west coast ports. Labour shortages are a factor in all sectors, but this is especially having an impact on such a labour-intensive industry as airfreight, especially on the ground.

“Airport congestion seems to be the price the industry has to pay for the lack of investment in, and appreciation of, cargo handling,” he added.

“The current inefficiencies on the ground must have opportunity costs for airlines, forwarders and shippers alike, because cargo will be missing flights.

“Two months ago, we described the air cargo market as ‘fragile’ heading into the traditional peak season, and this fragility is being visualised on social media through airport movies showing countless pallets and containers waiting on the tarmac.” 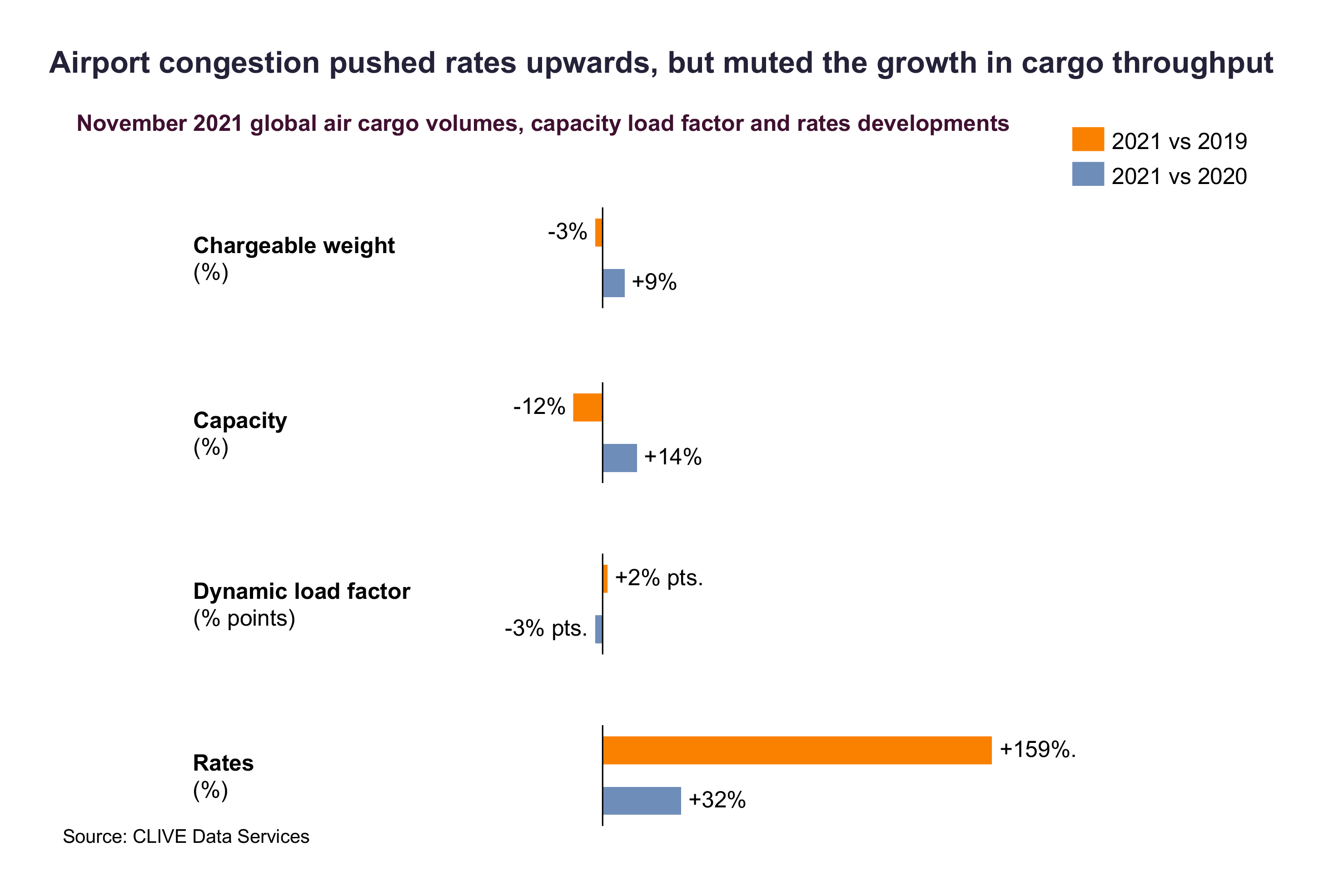 Looking ahead, van de Wouw is not expecting any let up before the Chinese New Year (February) as the industry continues to work through the backlog and deal with the ongoing supply chain issues caused by the pandemic.

In its latest market update, Flexport said issues at airports continued in Europe: “Congestion at Amsterdam Schiphol has improved, but terminal congestion across other Europe hubs continues to be a bottleneck.

“It is expected to last until the end of the year, and negatively impact all freight forwarders’ transit times.

“To cope with this, terminals are hiring additional temporary staff, implementing new processes and rethinking their infrastructure.”

On the situation in the US, Flexport added: “LAX/ORD/JFK ground handlers continue to face backlogs and are using off-airport facilities to manage the flood of inbound cargo, which has a trickle-down effect on the export side.

“Many have shortened their free time for storage, and have implemented new, earlier close-outs for exports to accommodate longer throughput times and screening requirements.”

In terms of impact on rates, the latest figures from the Baltic Exchange Airfreight Index (BAI) show that last week prices on services from Hong Kong to North America reached $12.39 per kg – the highest on (BAI) record and up from $9.12 per kg at the start of October.

To Europe prices from Hong Kong are at $8.43 per kg – also a high for the index.