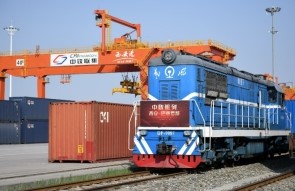 Rail freight services from Xi’an – considered the starting point of the silk road – to Europe have seen an increase in volumes this year in response to lengthier air cargo supply chains.

Statistics from the Xi’an Xinzhu Station of China Railway Xi’an Group show that as of May 6 the number of China-Europe freight trains originating in Xi’an reached 1,000, which was 78 days earlier than the same period last year.

Cargo throughput during the period totalled 1.9m tons, an increase of 41.7% over the same period last year.

In response to Covid-19, Xi’an opened up a dedicated channel for the trains to help maintain normal operations and support enterprises getting back to business.

Roland Verbraak, general manager at GVT Group of Logistics, said that extended airfreight services is one of the reasons for the increase.

This year air cargo supply chains have faced capacity shortages – due to the grounding of bellyhold operations – and airport congestion in China.

“We first started using the China-Europe freight train services just over three years ago, and as of last year, we have been sending five trains per week,” said.

“By train, we are able to receive goods in 15 days, whereas air-freight takes 10-20 days due to capacity [shortages], and is also four times more expensive. Because of this, freight trains are becoming more popular.

“During the current Covid-19 pandemic, we are still achieving five to six trains per week from China to Europe. The freight-trains have enabled us to continue operating as close to business as usual as possible during the pandemic. I have no doubt that the future is bright for freight trains from China to Europe as many other businesses start to recognise the benefits.”

Mr Xinhuang, director of Xi’an Xinzhu Station of China Railway Xi’an Group, added: “We are delighted to be able to be a solution to many enterprises during this stressful time. The China-Europe freight train service has clear benefits and has become the main means of transporting goods between China and Europe.

“We have been able to maintain operations as usual during the pandemic and have in fact extended our train services by reducing interval times and reaching new destinations such as Barcelona.”

Barcelona was added as a destination on April 8 with the train taking 18 days to reach destination.