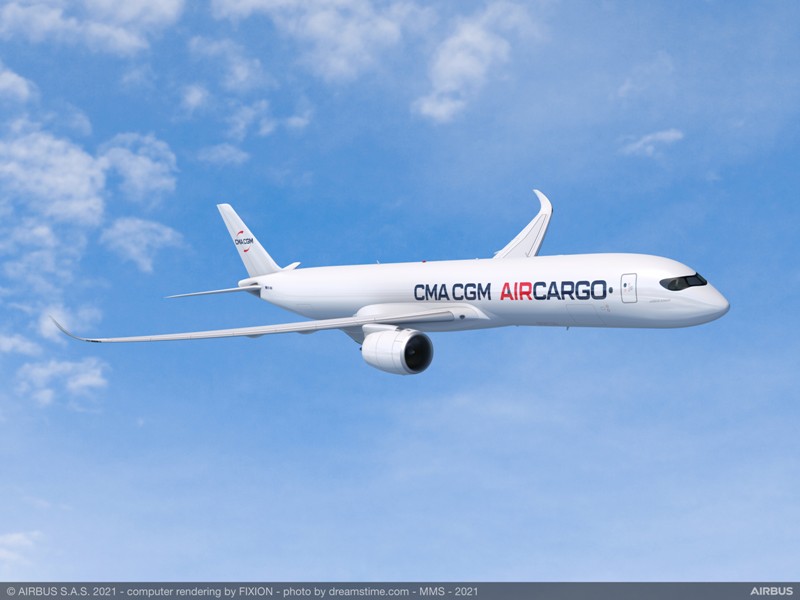 CMA CGM has become the second company to sign up for Airbus’ new A350 freighter as the French logistics group continues its expansion in the air cargo market.

The shipping giant, which launched its CMA CGM Air Cargo business earlier this year, has signed a memorandum of understanding covering the purchase of four of the type.

The commitment, which Airbus expects to be finalised in the “coming weeks”, comes days after Air Lease placed the first provisional order for seven of the type  during the Dubai air show.

CMA CGM said that it would also apply to launch an airline – its current four aircraft are operated by Air Belgium – and it has filed an application for an Air Operator Certificate (AOC) with the French Civil Aviation Authority.

The new aircraft, which will join the Group’s fleet in spring 2022 will be registered in France and will be based at Paris-Charles de Gaulle airport.

“The creation of a French freight airline also requires the initial recruitment of around 50 pilots who will join the CMA CGM Group during the coming weeks, and the implementation of a structure dedicated to the Group’s airfreight operations,” the shipping group said.

In a press release, Airbus also detailed more of the freighter model’s capabilities.

The company said that more than 70% of the airframe is made of advanced materials resulting in a 30 tonne lighter take-off weight, generating an at least 20% lower fuel burn over its current closest competitor.

“With a 109 tonne payload capability (plus three tonnes/11% more volume than its competition), the A350F serves all cargo markets (Express, general cargo, special cargo…) and is in the large freighter category the only new generation freighter aircraft ready for the enhanced 2027 ICAO CO ₂ emissions standards.”

Earlier this month, Air Lease became the first company to sign up for the new freighter model.

Airbus chief commercial officer Christian Scherer says: ”We are proud to welcome CMA CGM Air Cargo in the group of operators for the A350F and we are equally pleased to support the company’s future strategic development.

“Having an early endorsement by such an international cargo powerhouse as the CMA CGM Group is very gratifying.”

CMA CGM is not the only shipping line to be investing in the air cargo industry as they look to offer complete supply chain solutions.

Earlier this month, AP Moller Maersk announced that Star Air, its in-house aircraft operator, will purchase two new B777 Freighters to be delivered by Boeing in 2024 and leased three B767-300 Freighters which will be operational next year through Cargo Aircraft Management, the leasing arm of ATSG.