How will the easing of US travel restrictions impact air cargo?

The US will remove travel restrictions for many fully vaccinated passengers in a move that could see cargo capacity increase as a result of more bellyhold operations returning to the market.

The country announced today that it will re-open its borders to fully vaccinated travellers from 33 countries on November 8 if they have a negative Covid test in the 72 hours before travelling.

Travellers will not need to quarantine on entering the US, but the vaccination must be US Food and Drug Administration approved or have been granted an Emergency Use Listing from the World Health Organization (WHO).

CLIVE Data Services managing director Niall van de Wouw recently said that the transatlantic is the “number one market” where rates are likely to come down as a result of additional flights.

However, he said the change might not be instant and prices could actually increase in the short term.

“The current load factors from a passenger point of view are not high,” said van de Wouw. “I would expect airlines to start filling those flights first before they start adding all sorts of frequency and updating the aircraft.

“In that early phase, it will actually have a downward impact on cargo capacity because we have the same amount of flights but more bags and therefore less cargo capacity.

“So initially, it could actually increase the shortage in supply in certain markets but over time [it will increase supply and result in lower rates].”

IATA director general Willie Walsh said that passengers were already flying out of the US, so some flights do operate on the trade lane.

“We are delighted that the US has announced its intention to re-open,” Walsh said earlier this week. “There is a lot of transatlantic flying going on at the moment because of the fact that US citizens can travel and with the transportation of air cargo.

“But I would expect more capacity to come into the market. We will see some additional capacity made available and clearly that will have some impact.”

Meanwhile, the head of cargo at one major transatlantic airline said the pre-bookings for flights into the US were “amazing” suggesting the opening of US borders could have a quick affect.

Included in the countries that will be able to enter the US are: the 26 so-called Schengen countries in Europe, including France, Germany, Italy, Spain, Switzerland and Greece, as well as the UK, Ireland, China, India, South Africa, Iran and Brazil

CLIVE Data Services statistics show that spot rates to New York JFK from western Europe are currently up 237% against two years ago at $4.23 per kg with dynamic load factors at 85%. In the opposite direction spot rates are up 46% vs 2019 at $1.23 per kg and load factors are at 62%. 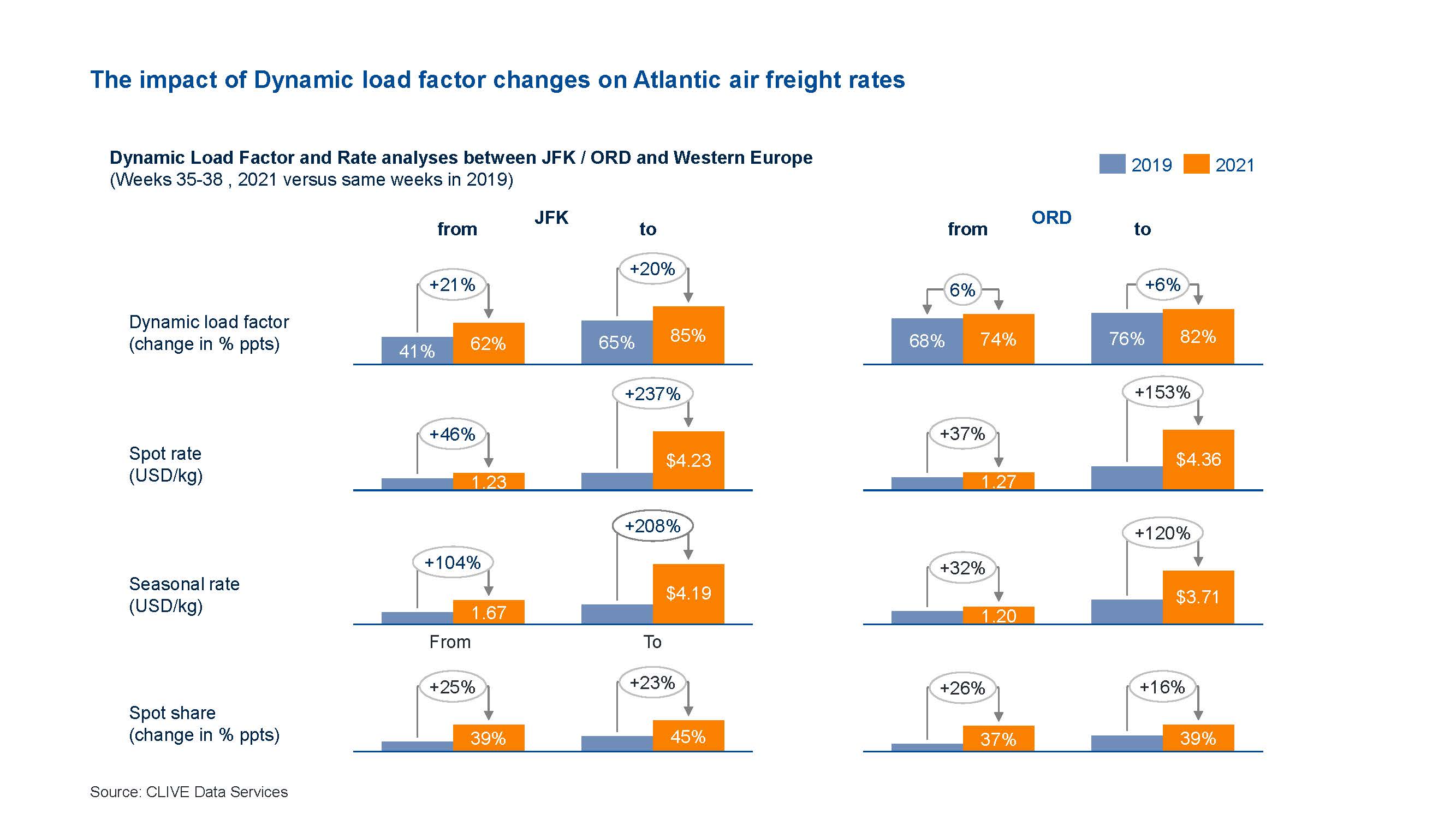