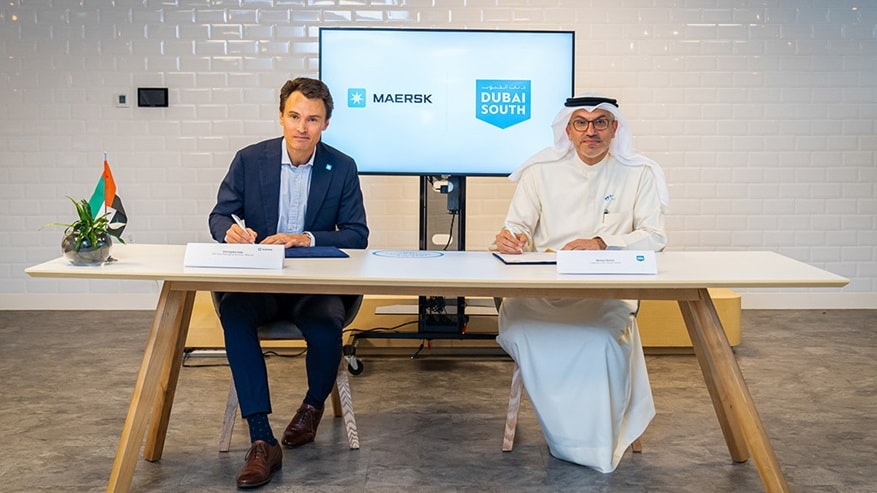 Maersk is set to grow its logistics footprint in the UAE after signing an agreement to more than double its warehousing and distribution offering in UAE.

Maersk Kanoo UAE has signed an agreement with Dubai South, the largest single urban master development focusing on aviation, logistics and real estate, for its new warehousing and distribution (W&D) facility in Dubai.

The 15,000 sq m “Maersk Integrated Logistics Centre DWC” facility in the Dubai South Logistics District will have a capacity to cater to 15,000 pallet positions and 10,000 bin locations; it will also serve as a fulfilment centre.

The new facility will allow Maersk to operate a hybrid model of a bonded and non-bonded warehouse and serve different customer needs, including that of a fulfilment centre for end-to-end e-commerce solutions.

Maersk said customers will benefit from reduced handovers of their cargo through its journey, leading to potentially faster turnaround times, higher visibility, better control and more predictability of their supply chains.

Following the inauguration of the first (108,000 sq ft) W&D facility in Dubai in March, Maersk will more than double its total footprint in the UAE with the new fulfilment centre.

“This will allow us to further build on our air-sea hub operation, which has become increasingly important while also satisfying the right balance between speed and cost with tremendous flexibility.”

Mohsen Ahmad, chief executive of the Logistics District, Dubai South, commented: “We are pleased to sign this agreement with Maersk, which will help expand its footprint across the UAE.

“Our mandate at Dubai South is to attract top international players to the Logistics District with the aim of boosting the logistics sector and diversifying the Emirate’s economy in line with the various government initiatives and strategies.

“In reinforcing Dubai’s status as global trade and airfreight logistics hub, we will spare no effort to offer Maersk optimal solutions to further advance its air cargo operations as well as support them in their growth journey.”

The agreement was signed by Cook and Ahmad at the regional headquarters of Maersk West & Central Asia in Dubai.

Fast-growing forwarder Scan Global Logistics (SGL) has opened its second office in the UAE in less than a year. The…

The United Arab Emirates (UAE) has approved a temporary licence for the first all-electric, zero-emissions cargo plane in the region. …