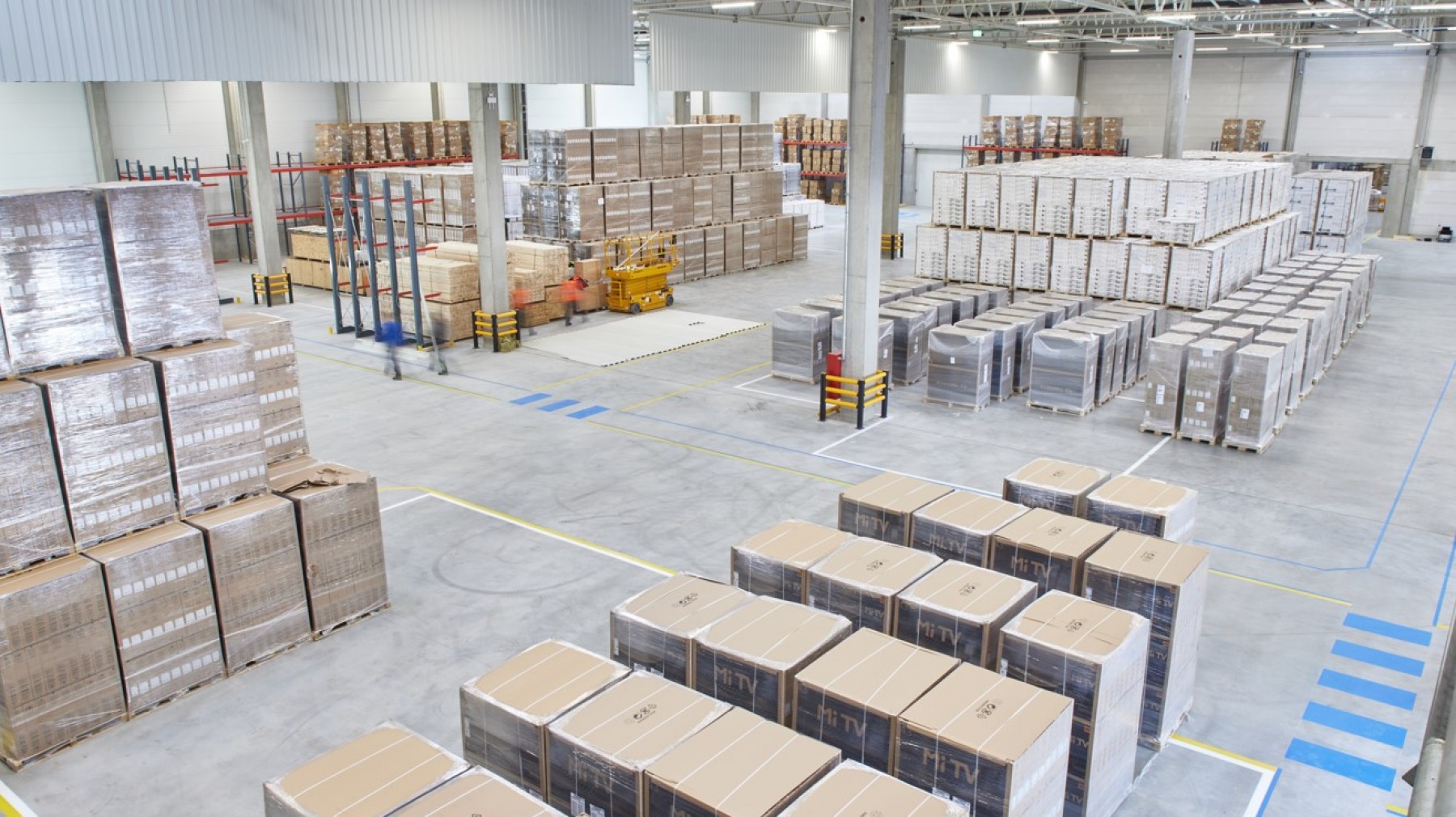 Swissport is demonstrating how ground handlers can go green and decarbonise while simultaneously growing their air cargo handling businesses.

Active at 285 airports in 45 countries across six continents at the end of 2021, Swissport is a major air cargo handler.

The air cargo segment comprises 25% of the business, although last year it made up more than 40% of overall business. This has dropped back to its previous proportion, but cargo demand is expected to stay strong.

In 2021, Swissport handled approximately 5.1m tons of airfreight at 119 cargo warehouses worldwide, 10% up on 2019. The company wants to increase this to over 6m tons in the next couple of years.

With such growth, it’s not surprising that Swissport aims to further maximise capacity with organic growth, acquisitions, and by working with partners.

Dirk Goovaerts, head of Middle East & Africa and global cargo chair at Swissport says: “If there are some airports where we are not yet present, that’s basically where we would like to focus on because it’s bolt-on – it’s relatively easy. And that can be organic, or potentially acquisitions.

Asia is a focus for Swissport because of production activity within Vietnam, Indonesia and Malaysia, in addition to China.

“We have only Vienna and Graz,” he says. “In Graz, we have a cargo services joint venture together with airport operator Flughafen Graz Betriebs (since 2016). We also have a sub-contracted handling operation in Linz, which is a major Austrian cargo hub. So we might look into expanding that and maybe some other points in Austria.”

In Germany, Swissport opened a 17,000 sqm facility at Frankfurt Airport in November 2020. Leipzig, a major DHL hub, and Stuttgart are also being seriously considered in the company’s expansion strategy.

One such new investment is an 8,000 sq m facility in DLH SkyLog Park in Fischamend, close to Vienna Airport and Swissport’s previously established on-airport facility. The rented facility already serves a number of regular customers, including DHL. 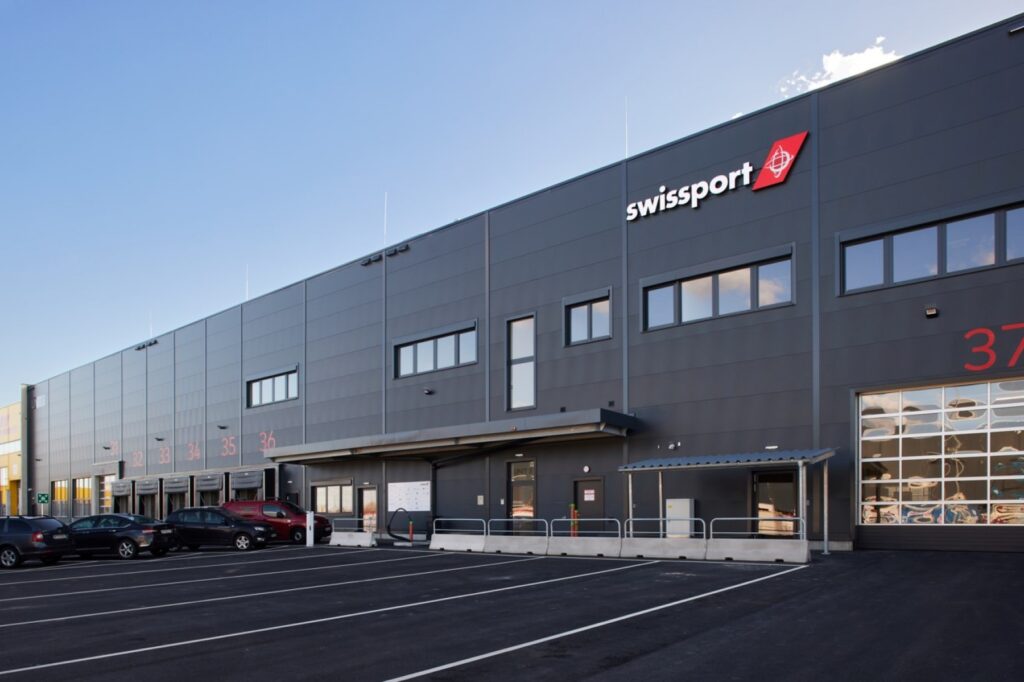 Goovaerts adds that managing capacity by collaborating with different stakeholders is also important. Firstly, to tackle “a shortage of first line warehouse capacity at airports” and secondly, to solve problems.

“A few months ago at Amsterdam Airport Schiphol there was massive congestion affecting the entire cargo community. There was also a similar problem in Frankfurt. When people in the industry come together and collaborate they fix it. If you don’t cooperate, you will never fix these issues,” he says.

Swissport has 13 air cargo stations in Germany and Austria, but the biggest challenge is maintaining a good working relationship with airports.

“The airport authorities usually are afraid of us because they think we are a global operating company, and we have capital behind us, and we might take too much away from them. We’re talking to some airports about a cooperation. But others are not really interested,” says Dieter.

Swissport established the position of global cargo chair in October 2021 to focus on the strategic development of the cargo business. Goovaerts, who joined Swissport in September 2021 as head of the Middle East & Africa region, took on the chair role to bring together Swissport’s cargo experts to pool market knowledge and share best practises, jointly develop strategies and align in the development of new markets.

Aside from physical growth, Swissport is focusing on digitalisation, providing facilities and support for the e-commerce and pharma sectors, and supporting freight forwarders.

On the latter subject, Dieter says, Swissport is very aware of how the role of freight forwarders has changed: “Forwarders are not the helpers of the airlines anymore. In many businesses they control the entire value chain.”

He adds: “Working with freight forwarders is something we would like to focus on globally, to work more with that part of the value chain while at the same time continuing to collaborate with the with the airlines.”

Goovaerts says: “We are not trying to break into the products of freight forwarders, we are trying to be complimentary. They play a very important role as an agent for an airline but also make a product which is for the end customers. We are we are in the value chain as a logistical player, so I think our relationship with forwarders and airlines is providing a solution that fits their needs.”

Challenges include the supply chain bottlenecks caused by the Shanghai lockdown. Swissport’s business in Germany and Austria, alongside business elsewhere in Europe, is feeling the strain.

“We’re waiting for China to open because right now we’re suffering from low import tonnages,” explains Dieter. But the biggest impact might yet be felt.

“At the same time, if China opens its floodgates again, we might have the challenge not to be able to tackle all the volumes and we might run into a situation we had in autumn last year where all the handlers in Amsterdam, Liege, Frankfurt could not handle the sheer amount of cargo for certain amount of time.

“The logistical chains are all interrupted and broken. It’s very hard to forecast what exactly and when it will come. But I’m 100% sure that this will have a big impact. And the more Chinese carriers you have in your portfolio, the more challenging it will be. That’s why it’s good to have a mix.”

Speaking about the other major industry topic – the Russia-Ukraine war, Dieter says the effective closure of Russian business has certainly had an impact.

“Swissport in Germany and Austria have an offline contract with AirBridgeCargo to handle cargo at airports where AirBridgeCargo is not flying to. Our competitors are hit much, much harder in Frankfurt, where they handled AirBridge before.”

Meanwhile, the return of belly capacity has already happened in certain regions and certain carriers, but it’s a manageable rate of return, Dieter says.

The European Union Aviation Safety Agency (EASA) will end cargo-in-the-cabin preighter flights from July 1, in a move that may be welcomed by ground handlers due to the time consuming and labour intensive nature of them, but Swissport says in fact it hasn’t been handling them for the last six months.

“Green logistics is becoming more and more important for the entire industry, but you don’t hear much about it with regards to ground handling,” says Henning.

In 2019, Swissport set a target for minimum share of 50% of electric vehicles in its global fleet by 2025 and has been turning its forklifts and tractors electric ever since. Nearly 80% of the equipment fleet is electrified in Austria, for example. 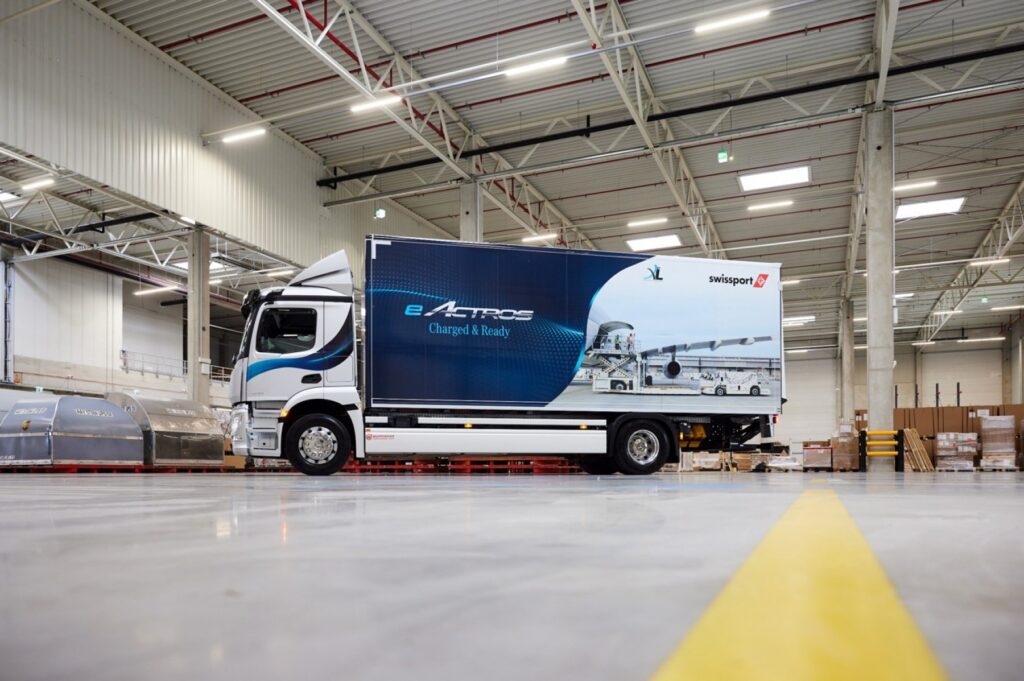 The truck will be used as a shuttle between Swissport’s Fischamend cargo centre and Vienna Airport.

It has an 8-tonne capacity and can travel 300km powered by rechargeable lithium batteries.

“The e-truck will reduce carbon emissions by 32 tonnes a year, compared to using a diesel truck,” says the Swissport sustainability team.

Charging infrastructure has been provided by Siemens, enabling the truck to charge in 90 minutes. The truck is charged at night to maximise operational efficiency during the day.
With expected usage, the truck will require maintenance once a year.

The company now aims to act a service provider for e-mobility in Vienna, in particular regarding infrastructure in the Vienna area, and has established a project to achieve this.

The project, which has already generated interest from DHL, is divided into three phases. The first phase, already in progress, is to establish a shuttle service and implement charging infrastructure.

Plans for phase two include the expansion of green activities within Austria. This includes a goal to make the Fischamend and the on-airport facility CO2 neutral, and connecting Vienna with Graz and Linz in a CO2 neutral way, although the company is still deciding whether this will be achieved using e-trucks or hydrogen trucks.

Hydrogen may also be considered to ensure the company meets its decarbonisation goals.

Swissport is currently in discussion with Vienna International Airport, which itself plans to become CO2 neutral by 2023, regarding a potential hydrogen fuelling facility.

Phase three will involve share of know-how and expanding activities to other Swissport centres globally.