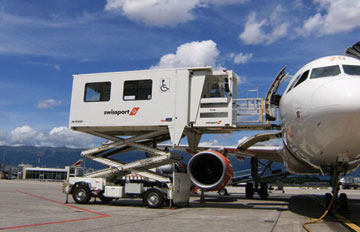 SWISSPORT France Holding and Servisair – both part of Swissport Group – is to sell its principal ground handling activity in France after struggling to make a profit.
The announcement comes after GH Team, co-chaired by Christophe Le Borgne, the current chief executive of Swissport in France, and Adrian Melliger, former senior vice-president of southern Europe (six countries, including France) for Swissport, made an offer to acquire the business.
The proposed sale is a strategic decision for Swissport, taking into account the growing economic pressure on ground handling activities particularly at Paris CDG, says a company statement.
The planned sale affects activities that are currently carried out within Swissport France, Swissport Services CDG, Servisair France and Héraclès, but does not include Swissport Cargo Services or Swissport Executive Aviation Nice, which will remain part of Swissport, the statement adds.
A consultation process is under way.
“Lately, it has been difficult for our ground handling operations in France to be profitable and efforts to turn the station back into profitability have not been as successful as planned,” reveals Dany Nasr, senior vice-president of Swissport International.
“As a responsible economic player, we have focused on finding a satisfactory solution and the project led by GH Team combines all the necessary conditions: a solid business plan and strong knowledge and expertise,” he adds.
Share this story