Trade continues to grow but air cargo braced for a slowdown 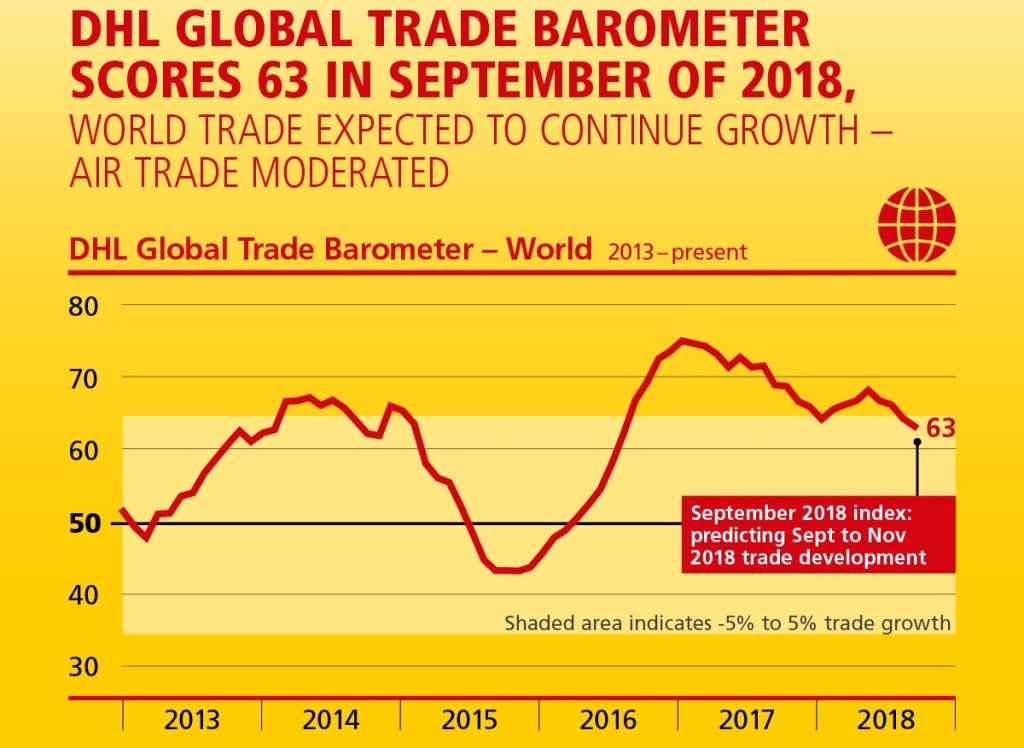 Global trade is expected to continue to grow, although the pace of improvement is expected to weaken, led by air cargo.
The latest three month DHL Global Trade Barometer (GTB) forecast index now stands at 63 points (anything over 50 points signals growth), compared with 67 points three months ago.
“After months of hot conditions and bright prospects in world trade, temperatures are dropping. We are moving into more normal and cooler – but still nice – temperatures,” said DHL Global Forwarding, Freight, chief executive Tim Scharwath.
“Despite rising political tensions among global players over trade-related issues, the DHL Global Trade Barometer indicates solid positive growth for world trade in the coming three months.”
The overall slight reduction is largely driven by lower growth rates of air trade, DHL said, as the mode specific index for air cargo declined by eight points to 62.
In contrast, the growth rate for global ocean trade decreased by one point to 63 points.
India is the only country with simultaneously increasing and very high prospects for trade growth, the UK with an unchanged outlook, and all other countries with slightly diminishing prospects.
India’s improvement is driven by a ten-point increase in India’s ocean trade growth.
The UK, maintaining an unchanged and positive index value of 57, comes “somewhat surprising”, DHL said, given the "tedious progress" of Brexit negotiations and heightened speculations about a no-deal Brexit.
“Despite intensifying global trade disputes, mainly between China and the US, these countries remain in growth mode, however, at a slower pace,” DHL said
“US growth prospects slowed down by five points to 63. The Chinese trade outlook decreased by four points to 59.”
The DHL Global Trade Barometer is based on large amounts of logistics data that are evaluated with the help of artificial intelligence.
The indicator has been developed in cooperation between DHL, the world’s leading logistics company, and IT service provider Accenture. It is published four times a year.