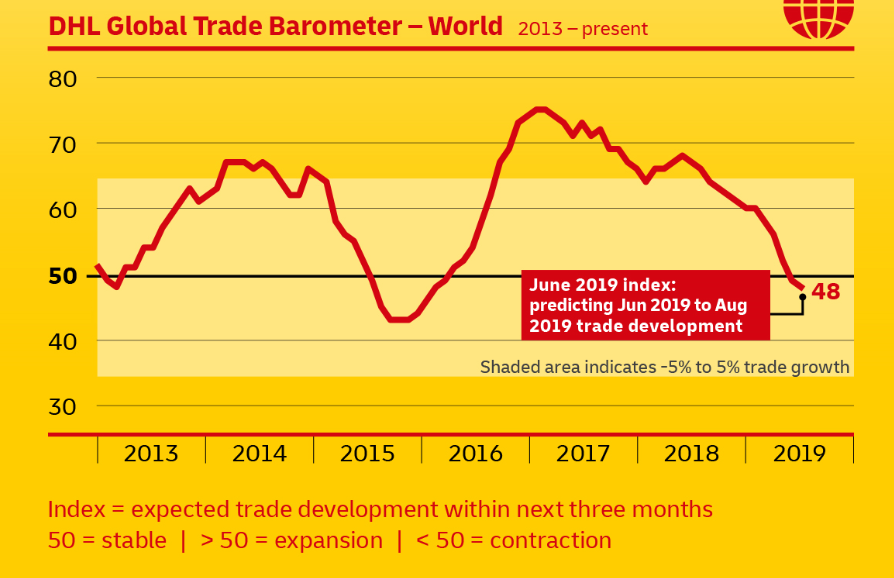 The DHL Global Trade Barometer (GTB) is indicating a contraction in worldwide trade over the next three months for the first time since its launch in January 2018.

The quarterly trade index for the coming three months now stands at 48 points, which as it is below 50, indicates expectations of a decline in trade.

The eight point decline compared with the last index was driven by “significant losses” for both air and ocean trade, DHL said.

The air trade index declined by six points to 49 points and ocean trade was down by eight points to 48 points.

Tim Scharwath, CEO of DHL Global Forwarding, Freight, said: “Amidst rising US-Chinese tensions, the slightly negative outlook for global trade for the third quarter of 2019 does not come as a complete surprise.

“And from a year-to-date perspective, world trade growth has still been positive. Hence, we remain confident in our initial prognosis that 2019 will be a year with overall positive, but slower trade growth.”

The US saw “by far the heaviest losses” amongst all GTB index countries, with its outlook declining by 11 points to 44.

Those losses were mainly driven by a negative outlook for major export categories, DHL said.

China scores second in terms of losses, with a decline of seven points to 49.

“Given the US’ and China’s large contribution to the global index, their diminishing trade growth rates contribute to a large extent to the projected global decline.”

Germany registered a one point decline compared to the previous quarter and now scores 52, whilst India loses six points, resulting in an outlook of 53 points.

“It might be an indication that companies are increasingly stockpiling inventories in face of the risk of a hard Brexit at the end of October.”