A night of the freighter stars in Chicago 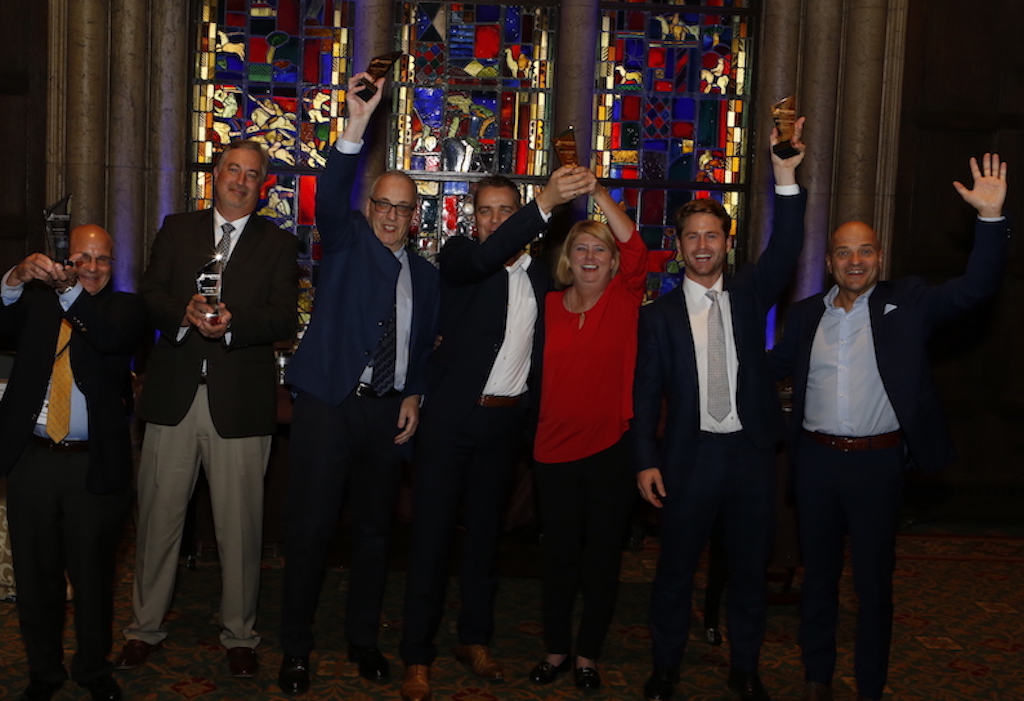 Cargolux has won the Best Freighter Operator category in a new set of awards launched in Chicago by Freighters World, a quarterly magazine produced by the UK publishers of Air Cargo News.
The Luxembourg-based cargo airline won the Liege Airport-sponsored award in a hotly contested category, with four finalists submitting evidence of operational efficiency and customer satisfaction.
Roger Hailey, editor of Air Cargo News and Freighters World, said that Cargolux had provided evidence of new products and routes, customer engagement, industry innovation through its alliance with Emirates SkyCargo and investment in freighter aircraft.
ANTONOV Airlines was highly commended in the same category.
Hailey was speaking at an awards dinner on the first night of the Freighters World conference in Chicago, the 17th such conference hosted by the magazine.
“We are excited to be named the world’s best freighter operator once more,” said Richard Forson, Cargolux president and chief executive in a statement.
He added: “This award shows the appreciation and support of our customers in the air freight industry for Cargolux, especially in today’s economic environment. It also shows that the market recognises our unwavering commitment to quality and appreciates the performance and dedication of our staff’.
The award for the Best Charter Logistics Project was collected by Etihad Cargo and animal transport specialist Intradco in a joint entry, which featured flying 19 black rhinos, an endangered species, across Africa from Johannesburg to Kigali in Rwanda.
The complex logistics operation met the category criteria of customer satisfaction and delivery of this precious cargo on time and to budget.
Miami International Airport (MIA) was named as Best Freighter Hub, beating five other finalists from major cargo gateways around the world.
MIA, after a record 2016 handling 2.2m tonnes, has already logged its best first half year in 2017. Miami, a leading airport for pharma traffic, continues to innovate through digitisation and customer engagement, including an impressive array of freighter operators.
Singapore’s Changi Airport was highly commended.
The category Innovator of the Year, with finalists from four companies, recognised original thinking and game-changing ideas from across the entire freighter supply chain, judged by success within the target market and a collaborative approach.
The winner was PEMCO World Air Services, with its Boeing 737-700 passenger to freighter conversion FlexCombi, a product that meets a growing need for cargo uplift supported by small numbers of passengers.
The final award, within the gift of the editorial team at Air Cargo News and Freighters World, was Newsmaker of the Year, sponsored by Chicago Rockford International Airport.
The award recognised a company or individual that has kept the website and magazines flowing with stories.
The trophy went to Jeff Bezos, chief executive of Amazon, whose e-commerce revolution has challenged and changed logistics supply chains around the world.
His corporate leadership has been the driving force behind Amazon and its new freighter arm Prime Air, using B767 converted aircraft leased from US companies Atlas Air Worldwide and Air Transport Services Group (ATSG).
Said Hailey: “When we decided to launch these awards, we were aware of a gap in the market, a failure to recognise and reward excellence in the freighter sector of the air cargo business.
“Well tonight we closed that gap and I am proud to say that these specially-tailored awards encouraged a large number of quality entrants from all sectors of the industry.”