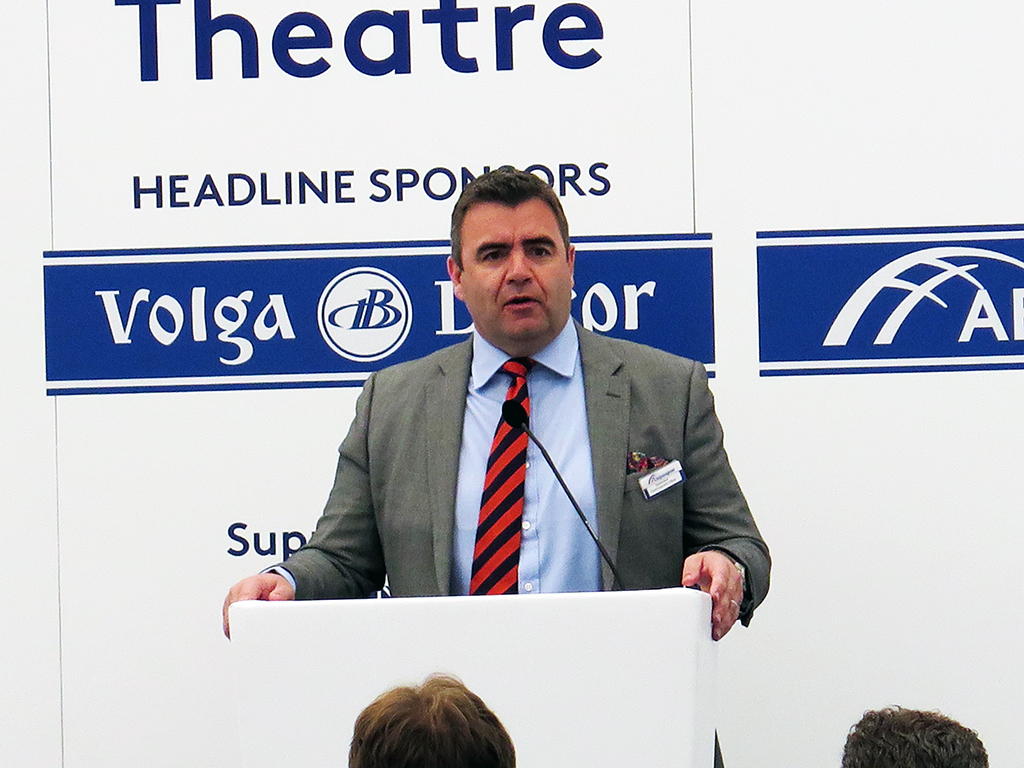 As Britain heads for the exit door to leave the European Union (Brexit), the head of UK flag carrier CargoLogicAir (CLA) outlined the need for negotiators in London and Brussels to recognise the importance of airfreight in future cross border trade.
David Kerr, chief executive of CLA, said that the B747F operator had flown over 2,200 flights since 2017 to “all corners of the globe”, carrying 170,000 tonnes of cargo, and remains on track to build a fleet of five freighters within five years, with the fourth aircraft expected to join in 2019.
Kerr told the cargo conference at the Farnborough International Airshow: “The business case to invest in a British cargo airline with a modern fleet and a growing network was to support one of the world’s leading economies in the top five and top ten of global importers and exporters respectively.”
CLA’s boss, with solid experience in international airfreight, said that his airline’s commitment to “build a strong British cargo industry” needed support from key stakeholders such as the government and airport operators: “It is critical to success”.
As civil and military aircraft soared in the skies above Farnborough, Kerr said that Britain’s £35bn turnover aerospace industry – 85% being exports – employs 123,000 people.
Said Kerr: “Those British aerospace exports need the fast and flexible solutions of the air cargo industry. Our airline is here to support UK industry and economy, and importers and exporters alike, and we want cargo’s voice to be heard by every stakeholder.
“We need our industry to be recognised for its role as a facilitator of global trade and we need all the support that goes with that.
“At a time when the UK government is defining its aviation policy in the context of Brexit we must ensure that the needs of cargo and its importance to UK plc are at the forefront of everyone’s minds.”
CLA is working with industry colleagues and associations in supporting an initiative to “drive better research to highlight the value of air cargo to UK economy”.
London’s negotiations with Brussels will include flying rights and aviation regulatory oversight, but Kerr wants there also to be focus on cross border trading regimes, keeping them free flowing.
“Like everybody else we want to see a swift resolution, and we need the right outcome for our industry and for companies like CLA who are making a long-term commitment to the UK market and to British business.”
Kerr then switched to the “vital role” played by stakeholder airports, observing that “many airports still regard cargo as a lower priority” at a time when airport expansion is top of the agenda, adding that cargo needs to be heard in the debate, particularly on aircraft slots.
“We also require proper infrastructure on the ground for cargo operators at UK airports, including parking and handling. To this end we will be giving UK airports the opportunity to get back into the all-cargo game by engaging in a tender process aimed at enhancing our operating base platform wherever that may end up.
“We need airports to be more forward thinking when it comes to cargo and cargo handlers, and to provide their knowhow and capital to provide the right solutions.”
An example of such forward thinking came 24 hours later when Liege Airport in Belgium inked a Memorandum of Understanding on strategic cooperation with Volga-Dnepr Group (VDG) and strategic partner CLA.
Within the next three to five years, the trio will work in establishing a regional freighter hub for VDG and CLA, with the provision for up to 30 cargo flights per week
And just 48 hours before local councils surrounding Heathrow threatened a legal challenge to UK government approval for a third London runway, Kerr was in prescient form: “We also hope that local government will recognise the value to be gained from supporting the expansion of airport cargo facilities.
“The growth of UK airports and aviation is not just about noise and pollution; it is about trade and the future of UK business.”
He concluded: “Air cargo can be the engine of the UK economic growth and we at CLA look forward to playing a leading role in that progress.”