An-124 delivers heavy load into Dube 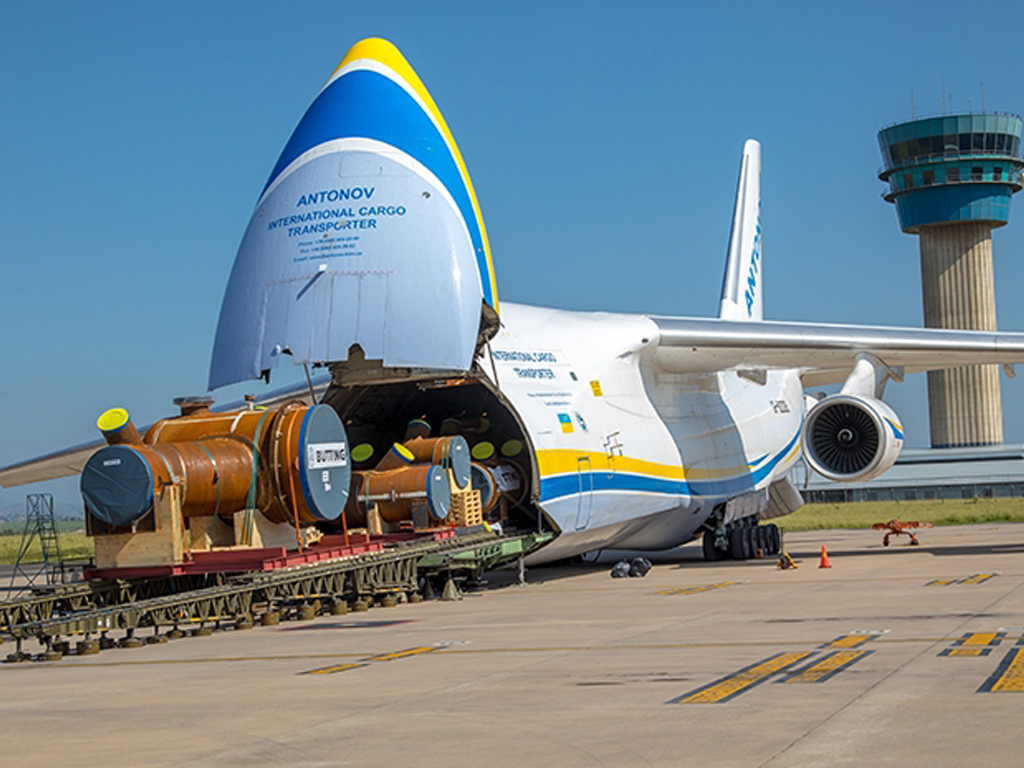 On March 30, Dube Cargo Terminal welcomed an Antonov An-124 cargo aircraft, just part of the process of shipping 80 tonnes of highly specialised spools which will form part of the main furnace at the local oil refinery.
The components, flown in on an Antonov Airlines freighter, ranged from 4 to 16m in length, 1 to 3m in width and 2 to 4m in height
Dube Cargo Terminal is part of Dube TradePort. Located 30km north of the South African city of Durban, Dube TradePort represents KwaZulu Natal’s biggest infrastructure project.
This Special Economic Zone (SEZ), geared to promote foreign and local investment, incorporates King Shaka International Airport.
Due to the oversized nature, weight and value of the cargo flown into Dube Cargo Terminal, Sebenza Forwarding and Shipping, the company contracted to oversee delivery of the equipment to final destination at the refinery, said that it was necessary to charter the large An-124 cargo aircraft.
Justin Naidoo, airfreight controller at Sebenza, said: “Due to the enormity of this cargo, not to mention the monetary value of the shipment, extreme care and caution had to be taken in ensuring that the transportation and disembark from the aircraft, as well as loading onto the specialised low bed trucks, was carried out with the utmost precision and precaution.
“The need for specialised cranes, rigging crews and equipment that best suited the low-bed trucks needed to accommodate this cargo really demanded the input of personnel with years of experience, as well as planning down to the tiniest detail – needless to say, this was all done successfully,” he insisted.
Landing rights were secured a few weeks prior to the Antonov’s arrival, the cargo being sourced and flown in from Germany. The aircraft took two and a half days to reach Durban’s King Shaka International Airport, having left Leipzig Airport on March 27, with two rest and refuelling stops in Cairo and Mombasa.
This is the second time an An-124 has flown in to deliver its cargo to Dube Cargo Terminal. In 2013, the facility welcomed a smaller load aboard an An-124: specifically, a 54-tonne acid cooler destined for a mine in New Caledonia, an archipelago located in the south-west Pacific Ocean.
“Dube Cargo Terminal has invested in a specialised outsized cargo handling facility which is equipped with hoists, mobile cranes and conveyor systems to handle bulky or outsized shipments such as large pipes, outsized machinery, motor vehicles, large animals and 20-foot ocean containers,” explained Ricardo Isaac, manager of Dube Cargo Terminal.
“The infrastructure to handle outsized cargo allows us to be flexible in enabling more specialised charter flights as well as growing cargo throughput by facilitating sea to air connections via the increased cargo capacity from the air services that already fly directly to Durban.
“By doing so, we are confident that we will continue to stimulate more growth in the local market.
“In the last 12 months we have seen a steady growth in excess of 20% in cargo throughput,” Isaac said.