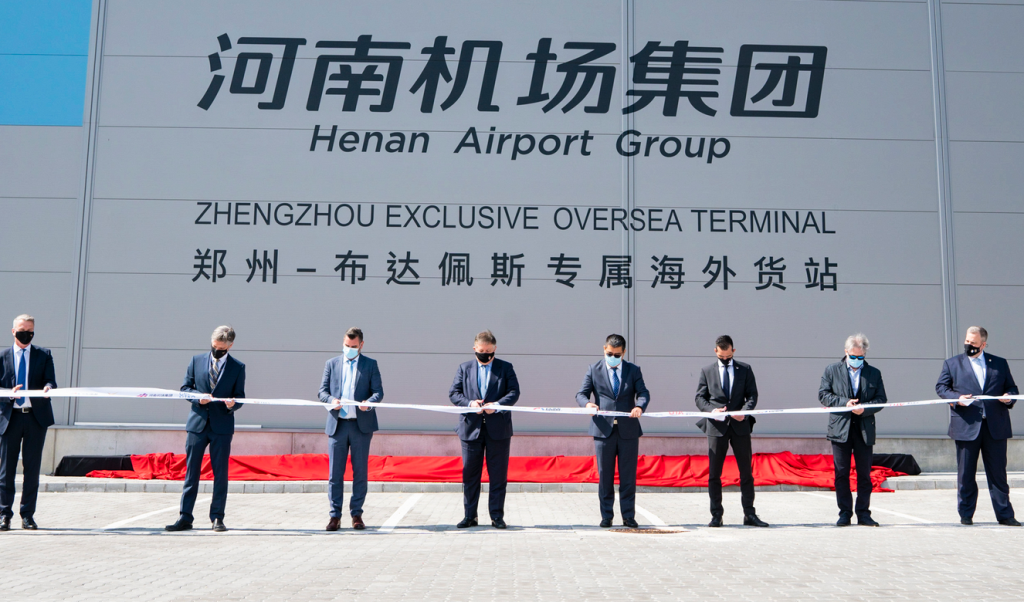 Budapest Airport (BUD) has dedicated an air cargo facility to cargo from China as part of efforts to become a central European distribution hub for traffic from the country.

The airport explained that as part of a development project with Zhengzhou International Airport (CGO) a warehouse hall, called the Zhengzhou Exclusive Overseas Terminal, was yesterday dedicated to handle traffic on flights launched as part of the project.

Meanwhile, the Budapest Exclusive Overseas Terminal at Henan Airport was handed over for dedicated operations in February 2021.

The development project was established by Budapest Airport, the Chinese Henan Airport Group (the operator of Zhengzhou International Airport) and the Chinese-Hungarian business and logistics development company CECZ/Utlink.

It aims to establish “the aerial Silk Road between Hungary and China” and create dedicated logistics centers at the two airports.

As part of the co-operation, a direct CGO-BUD-CGO cargo flight was launched last October, organised by the CECZ/Utlink group.

The flights are operated by Hainan Airlines three times a week and at the end of March the connection was expanded with two more frequencies per week, flown with Boeing B747 aircraft.

László Mosóczi, Hungary’s state secretary for transport policy, said: “According to the government’s plans, Hungary could become the cargo, logistics and distribution hub for Central Europe.

“This strategic objective can be achieved if the largest possible proportion of the goods transported between Europe and the Far East reach their destination via Hungary. In harmony with the policy of opening to the east, we are therefore continuing to work to connect continents and regions with modern and safe logistics solutions.

“We are also looking for ways to deepen and expand cooperation with our Chinese partners, in line with our joint goals.”

The other key outcome of the agreement is that Cainiao, Alibaba’s logistics company, designated Budapest Airport as its east-central European hub, with operations already underway.

“As a result of successful implementation, tens of tons of freight (tens of thousands of packages) have already appeared at Budapest Airport per day, and much greater volumes are expected going forward,” the Hungarian airport said.