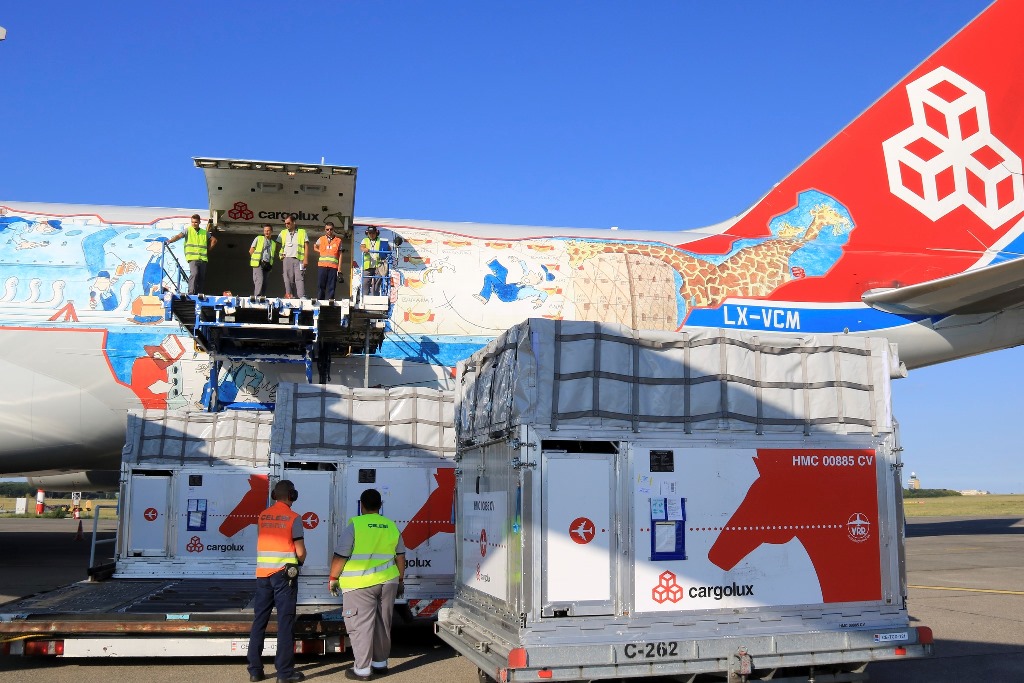 Cargolux and Hellmann Worldwide Logistics arranged the first transportation of live horses from Budapest Airport after Hungary received clearance to begin flying the animals last year.
In total, 14 racehorses bred in Hungary were flown to China last week, on board a Cargolux B747-8F.
Budapest Airport property director René Droese stated that, given the growth in live animal exports, the company plans to build facilities dedicated for animals in the new cargo base to be constructed over the coming years at the hub.
"Thus, in a few years’ time, it will be possible to fly practically any animals requiring special treatment or care from Budapest, to any part of the world," the airport said.
The Friesian and Shagya Arabian horses were flown from Budapest via Luxembourg in special containers, accompanied by a team of carers and vets, on their way to their new Chinese owner.
The journey took the horses from Budapest to Luxembourg, Beijing and finally Wuhan. The airport said that since the 2008 Olympics and the economic upturn, horseback riding has become increasingly popular in China, with more than half a million people riding on a regular basis.
"Hungary is now able to appear on this market, after it received the permit required for the air transport of horses at the beginning of last year. Since then, this was the first live horse shipment from Budapest Airport to China," the company said.

Chris Nielen, vice president sales for Cargolux, said: “The transport of animals is an important part of our core activities. We have an unparalleled expertise and a team of highly qualified professionals to ensure the welfare of the horses. We invested in new horse stalls that guarantee the wellbeing of the animals and state of the art transport.”

Dénes Szigeti, airfreight manager for Hellmann Worldwide Logistics in Hungary, which organised the transport, added: "We were making history, no forwarder has ever transported horses from Budapest Airport to China directly by regular flight.
"Our whole special live animal team was working on this transportation project side by side which was a great success. Special thanks to the Hungarian live animal team for their dedication and hard work and also special thanks to all of the involved parties who helped us. Our dream has come true.”

Budapest Airport handled more than 72,000 tons of cargo in the first seven months of the year, which is an increase of nearly 20% compared to last year.
Read more Animal Transportation news