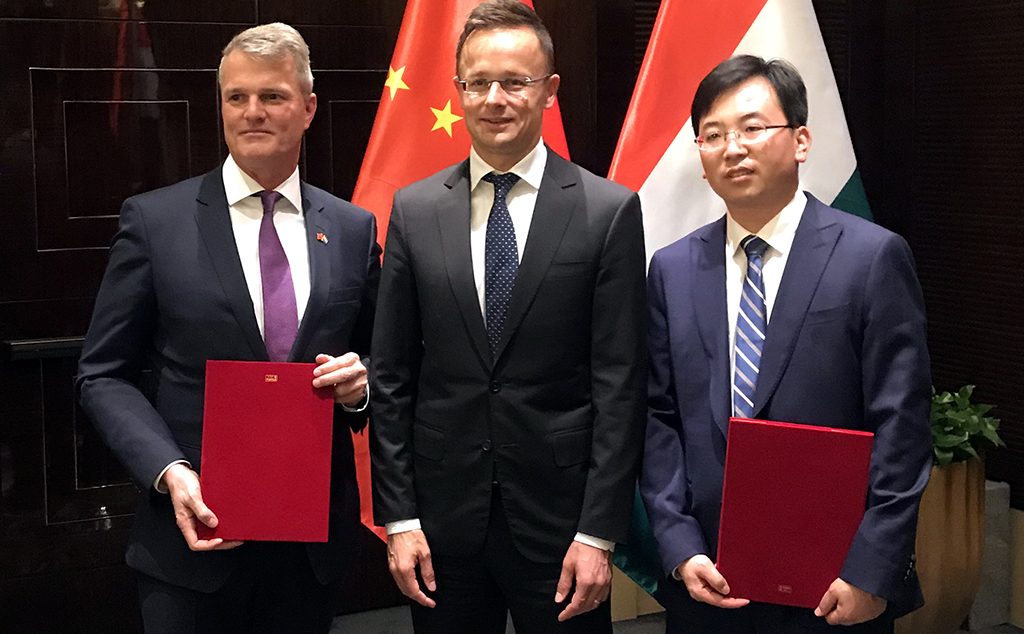 Budapest Airport will cooperate with two Chinese cargo hubs, Xi’an Xianyang and Zhengzhou international airports, to develop the Hungarian gateway into a major central and eastern European distribution base for Chinese goods.

This was the main goal of the Memorandum of Understanding (MoU) signed during the ‘Belt and Road Forum’ summit held in Beijing.

The document was signed by Wang Zhendong, deputy managing director of Xi’an Xianyang International Airport, and René Droese, chief property and cargo officer of Budapest Airport, in the presence of Péter Szijjártó, Hungary’s minister of foreign affairs and trade.

Budapest Airport will also sign a cooperation agreement with Zhengzhou International Airport next month (May), when a Chinese delegation is due to visit Budapest.

Said Szijjártó: “Between two countries – like these – with quite a distance between them geographically – strong economic cooperation is only possible if they are well-connected, which is why aviation connections, direct flights between Hungary and China, are of key importance.

“For this reason, we are delighted that a cooperation agreement between the airport of Xi’an and Budapest Liszt Ferenc International Airport is signed, as this agreement may link additional Chinese cities to the network where direct flights are available from Hungary, from Budapest.”

During the Hungarian-Chinese Forum, a series of other agreements were signed between the Hungarian and Chinese partners in the field of investments and the pharmaceutical industry.

The support of Hungarian diplomats and trade promotion experts has helped Budapest Airport to double the weekly capacity of direct cargo flights between Budapest, Hong Kong and Zhengzhou, and also to increase the belly cargo links on board scheduled Air China passenger flights between Beijing and Budapest.

Jost Lammers, chief executive of Budapest Airport said: “The foundation stone was laid with the direct connection to Zhengzhou, and now it is time to further intensify our cooperation with our new Chinese partners, and thus exploit the enormous potential in the freight business in particular.

“Zhengzhou, Xi’an and Budapest share a great dynamic of growth, and we are very confident that we can mutually benefit from this cooperation,”

Since the beginning of April, Cargolux has been operating two additional direct cargo flights per week between Zhengzhou and Budapest.

With Xi’an International Airport, located at the ‘gateway to the Silk Road’, in the industrial province of Shaanxi, Budapest Airport has gained a strategically important partner.

Last year Budapest Airport launched a €32.6m project to construct a new Cargo City which will be handed over to operators and tenants by the end of this year.