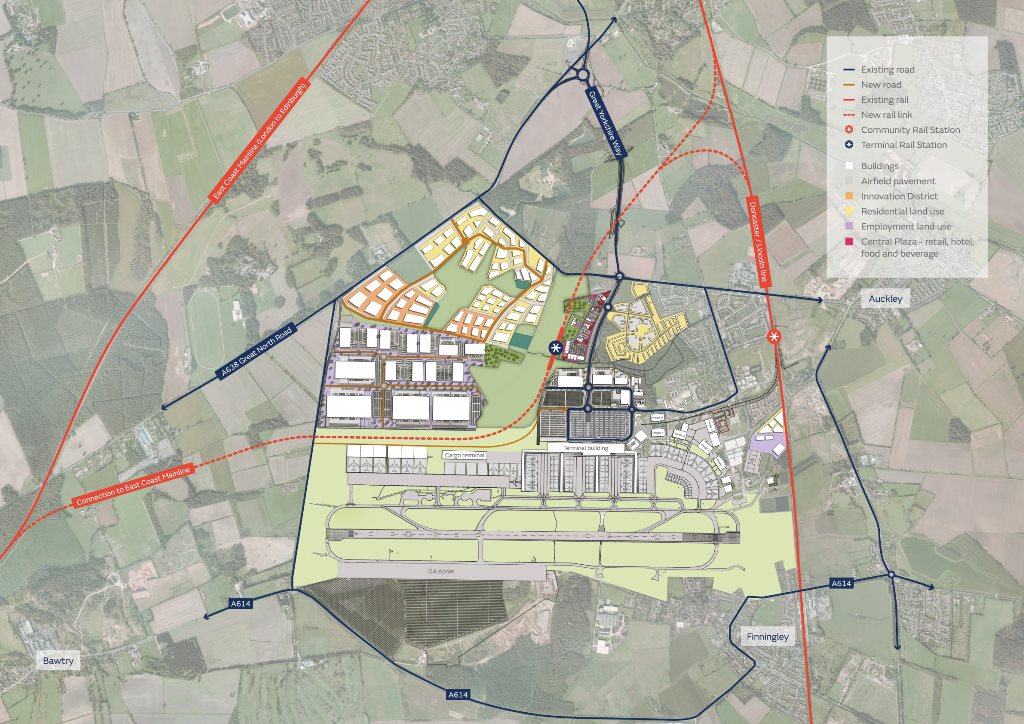 Doncaster Sheffield Airport (DSA), a gateway in the north of England serving the region around those two cities, has released its 20-year Master Plan as well as what it describes as its Vision for an even longer term future.
The DSA Vision envisages a ‘Connected National Economy’ that “realises the airport’s potential as a major catalyst for transforming the north of England, creating new employment, housing, tourism and aviation capacity”.
Or, to out it another way, DSA operator Peel Airports explained: “The Vision realises the airport’s full potential, delivering major international connectivity and economic benefit to Yorkshire, the surrounding regions and the UK.”
The Vision is for an ‘aerotropolis’ with the capacity to handle 250,000 tonnes of cargo per year as well as an annual 25 million passengers.
This increase in freight capacity would “support the UK’s international trade at a time when no airports across the UK are significantly expanding cargo capacity”, DSA informed.
Key to the Vision is what Peel Airports says is the single piece of new infrastructure required – a rail station connected to the nation’s East Coast Mainline railway.
The more contemporary 2018 – 2037 Master Plan set out by DSA expects passenger numbers to increase to 4.7 million a year by 2037, while 70,000 tonnes of cargo will be handled a year by that same date.
The airport’s Master Plan detailing the future development of the current site and projected growth over the next 20 years will now go out for public consultation.
Robert Hough, chairman of Peel Airports, commented: “This is a Vision with a central pillar that delivers air connectivity, new housing, highly skilled employment, tourism and better rail connectivity at exceptional value for money; it is straightforward to build and deliverable in five years.
“It is of national significance for aviation and the economy, particularly the North, and we want to see it realised as soon as possible.
“This is required beyond what Heathrow expansion will deliver, with a range of benefits for the North and East of the country.”