Brussels Airport has highlighted continued growth in its airfreight volumes since last summer, while noting its “significant role” in the distribution of Covid-19 vaccines.

Full-freighter demand at the airport increased by 72.5% year on year in January, while integrator services experienced growth of 37.4%. Meanwhile, bellyhold volumes declined by 47.1%.

“These strong growth figures largely compensate for the limited volumes of belly cargo carried on passenger flights,” the hub said.

Trucked airfreight volumes increased by 10.4% year on year in January “after several months of negative growth”.

The hub added that the total volume of goods handled by its logistics platform at increased by 18.4% year on year in January to 58,311 tonnes.

Passenger traffic at Brussels Airport in January, hit by the effects of the pandemic, declined by 83.6%.

Arnaud Feist, chief executive of the Brussels Airport Company, explained: “After a very difficult year 2020 with a mere 7.6m passengers, Brussels Airport expects another few challenging months for the aviation sector in particular.” 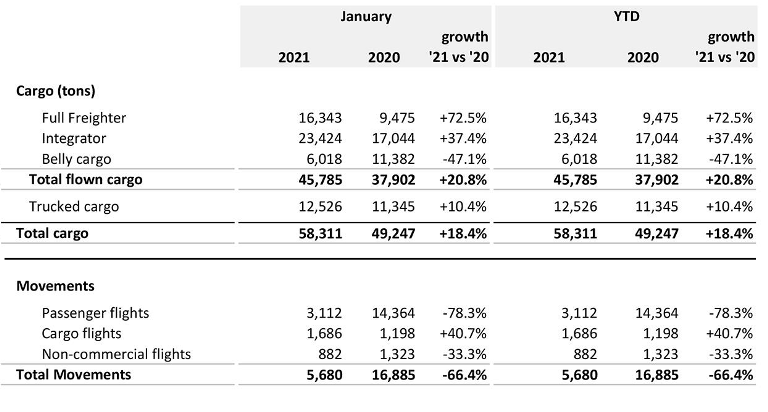 Brussels Airport attributed its growth in cargo demand to imports from Asia and North America, “which are recording strong growth compared to the same month last year”.

It added: “On the exports side, we find that the volumes towards Asia in particular are doing well. We also note a positive impact on air cargo volumes related to Brexit.”

Meanwhile, vaccine operations at the hub, which are “sure to continue all through the year”, it said.

The hub said that DHL Express flights are operating “almost daily”, transporting smaller shipments of the vaccine to destinations in its network. In addition, larger shipments are being carried on commercial operated by Singapore Airlines, Qatar Airways, Emirates, El Al, Virgin Atlantic and United Airlines.

Feist commented: “We are very proud to be part of the solution to the pandemic by fully deploying our network and expertise in the transport of pharma products.

“The partnership with Pfizer-BioNTech to further distribute the Covid-19 vaccine from our country is particularly important for Brussels Airport. With our logistics partners we have invested a lot in the preparation of this essential transport and we can therefore offer a streamlined chain to get the vaccine to its destination in optimal conditions.”

Danny Hendrikse, vice president of  intercompany operations at Pfizer, added: “Brussels Airport has been an integral partner for us in the rollout of Comirnaty. The Brussels Airport team and the Brucargo community ensured a high-quality approach to handling the vaccine, as well as to the expected upscaling of transport needs via the airport over coming months.”

Last month, India-based carrier SpiceJet signed a Memorandum of Understanding (MoU) with Brussels Airport for the transportation of Covid-19 vaccines.

The partners are working towards developing a direct airlink between Brussels and India, with the European airport becoming SpiceJet’s “first flight point in Europe”.

Brussels Airport is providing assistance to SpiceJet with regards to slots and networking contracts.

The companies are also jointly working with the government, pharma companies and forwarders to ensure a “reliable ecosystem for vaccine delivery in a temperature-controlled environment”.