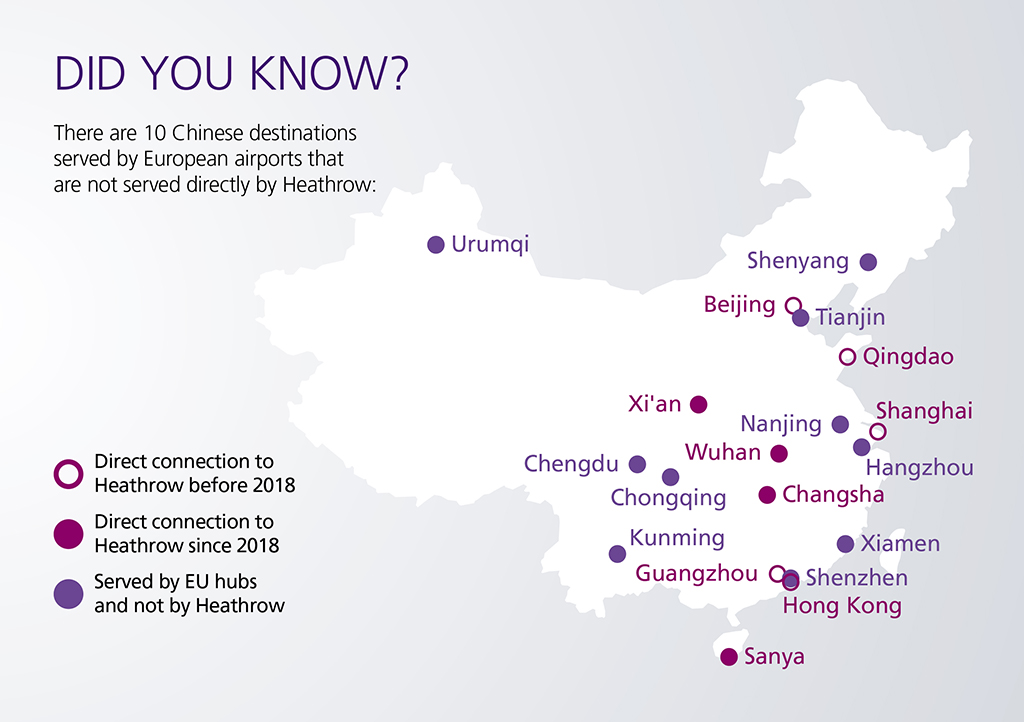 London’s Heathrow airport today welcomed the launch of two new direct routes to the Chinese cities of Wuhan and Sanya by China Southern.
Both destinations are a first for direct routes into Heathrow, while the connection to Sanya is a first for Europe. These routes, said an airport spokesperson, will allow for over 6,000 tonnes of additional cargo capacity per year.
However, in a comment aimed at the continuing political debate around the construction of a third runway at Heathrow, the spokesperson added: “Due to capacity constraints, European hub airports continue to have a competitive advantage in connecting to China.”
From today (May 30), China Southern will launch a three times a week service to Wuhan, a mega-city referred to as the “Chicago of China”, before beginning a twice weekly scheduled service to the popular tourist destination of Sanya on Hainan Island from July 12.
Added the airport spokesperson: Last year’s services to China via Heathrow contributed £510m to the UK economy, and supported up to 15,000 jobs, according to Frontier Economics.
“While connections to Chinese cities are clearly valuable to the UK, rival European Union (EU) hub airports with capacity to connect directly to 10 other Chinese destinations, including mega cities like Hangzhou, Chengdu, and Kunming, are facilitating more trade and investment to their respective countries.”
The UK government is expected to vote on a National Policy Statement on Heathrow’s plans for expansion, including a third runway, over the coming weeks.
Expansion will allow the airport the capacity to offer up to 40 new long haul destinations, as well as double its cargo capacity – providing the UK with trade infrastructure as the country is looking to extend its trade relationships after leaving the EU, a process commonly known as Brexit.
Heathrow’s Export Climate Index for the first quarter of 2018, carried out by the Centre for Economics and Business Research (CEBR), revealed that the value of exports passing through Heathrow to non-EU destinations increased by £2.9bn compared to Q1 in 2017.
Added the airport spokesperson: “However, the Export Climate Index has also shown growth in passenger numbers remains constant due the capacity constraints faced by Heathrow. Combined with the Index’s evidence that seafreight is declining, there is a risk that British exporters could look for alternative routes via European Hub airports to get their goods and services to long-haul markets.”
Heathrow chairman Lord Deighton said: “Today’s Export Climate Index results show that UK exporters are making the most of what they’ve got – and doubtless, they are excited about our new Chinese routes, and the untapped trade and investment opportunities these open up.
“However, our exporters also know they are at a disadvantage compared to their European counterparts, because Heathrow’s lack of capacity still means we are taking a limited and piecemeal approach to building long-haul trade routes.
"Heathrow is not only the country’s biggest airport, but also its biggest port by value – it is vital that we expand this key component of our trading infrastructure as we look for export opportunities outside the EU.
“A third runway will better enable British exporters to compete on a global stage, and we urge the Government to table its final National Policy Statement on expansion so that Parliament can vote and we can get on and deliver it.”
Read more Cargo Airport News and Brexit news