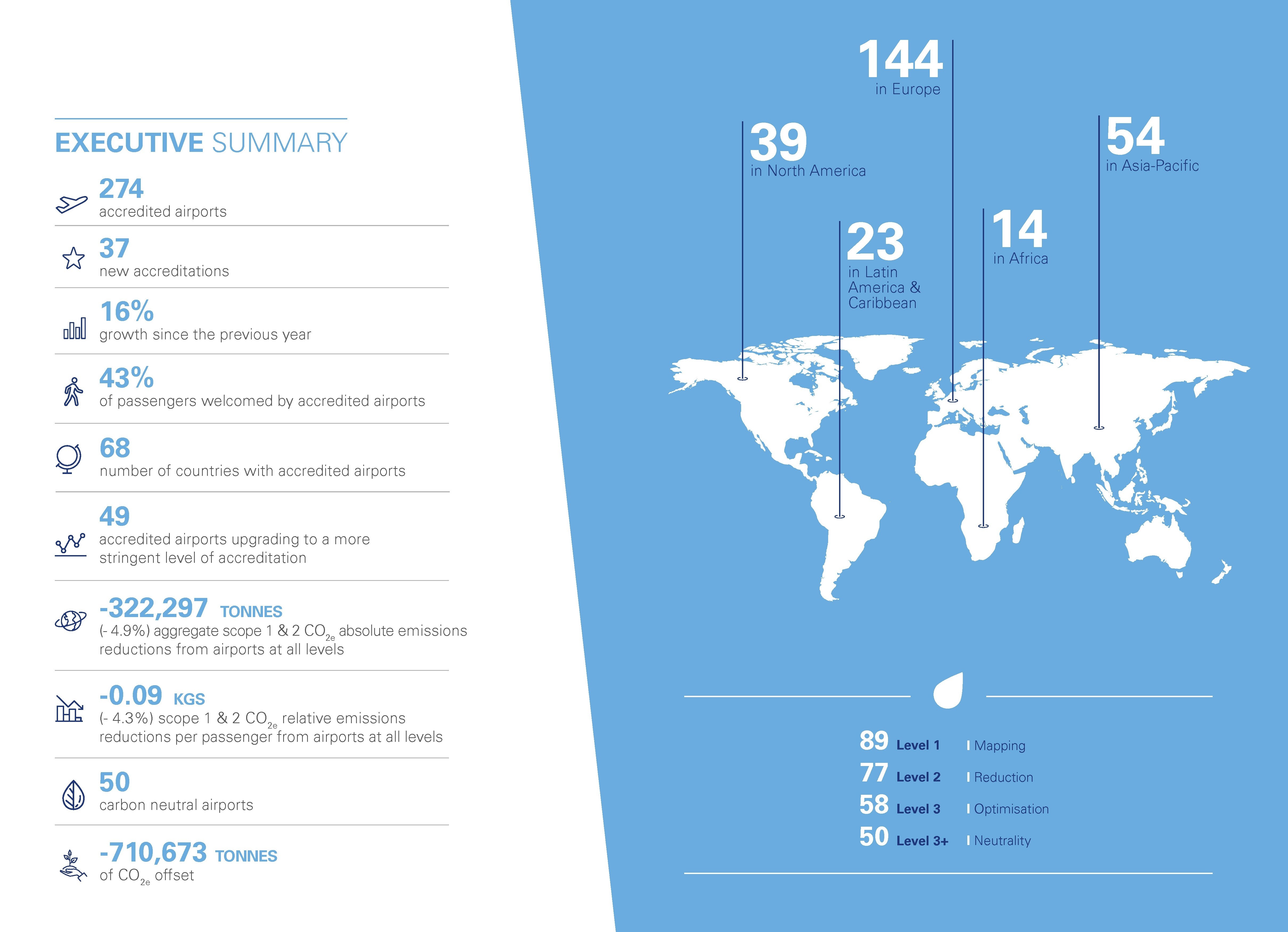 Airports worldwide are tackling climate change, with 288 hubs actively engaged in a global carbon accreditation programme that registered a collective CO2 reduction of more than 320,000 tonnes or 4.9% in the past year.

Some 61 airports are now carbon neutral (Level 3+) according to the latest annual results published by Airport Carbon Accreditation, a body developed and launched by ACI Europe in 2009 and now global in membership.

The past reporting year, running from May 2018 to May 2019, ended with 274 accredited airports worldwide, an increase of 16% over the previous year.

Since May this year, 14 more airports have joined the programme and became certified at one of its four levels of accreditation (mapping, reduction, optimisation and neutrality). Out of the 288 member airports, 147 are in Europe, 53 in Asia-Pacific, 47 in North America, 27 in Latin America and the Caribbean, and 14 in Africa.

“It has been a decade since the launch of the programme and it keeps on growing – both in the number of airports coming on board and in the level of ambition for carbon management.

“In its tenth year, 49 participating airports upgraded to a more demanding level of accreditation, the highest ever reported.”

She added: “From May 2018 to May 2019, accredited airports succeeded in collectively reducing the CO2 emissions under their control by 322,297 tonnes, a reduction of 4.9%.

“Additionally, the fifty airports at the highest level of Airport Carbon Accreditation contributed to a further reduction of 710,673 tonnes of CO2 in other sectors through offsets aimed at balancing out their residual emissions.

“Their choices in terms of offsetting were framed by our recently developed Offsetting Guidance Document, which sets new requirements and recommendations to help them procure offsets of the highest quality.”

Niclas Svenningsen, who heads the Climate Neutral Now initiative at the United Nations Framework Convention on Climate Change (UNFCCC) secretariat, commented “Air connectivity is an essential part of modern society, enabling people, business and communities to function together for the benefit of all.

“However, this mobility also poses some serious challenges, in particular in terms of climate change.”

Svenningsen continued: “By continuing their sterling work to address their emissions through Airport Carbon Accreditation, airports worldwide are showing that mobility and sustainability do not necessarily imply trade-offs.

“In the wake of the Climate Emergency, the need for non-State climate action has never been more burning.

“It is encouraging to witness the airport industry’s push for ambitious carbon management from within, which this year delivered a 4.9% reduction in CO2 emissions under their control. There is much that other industries can learn from this and even emulate.”